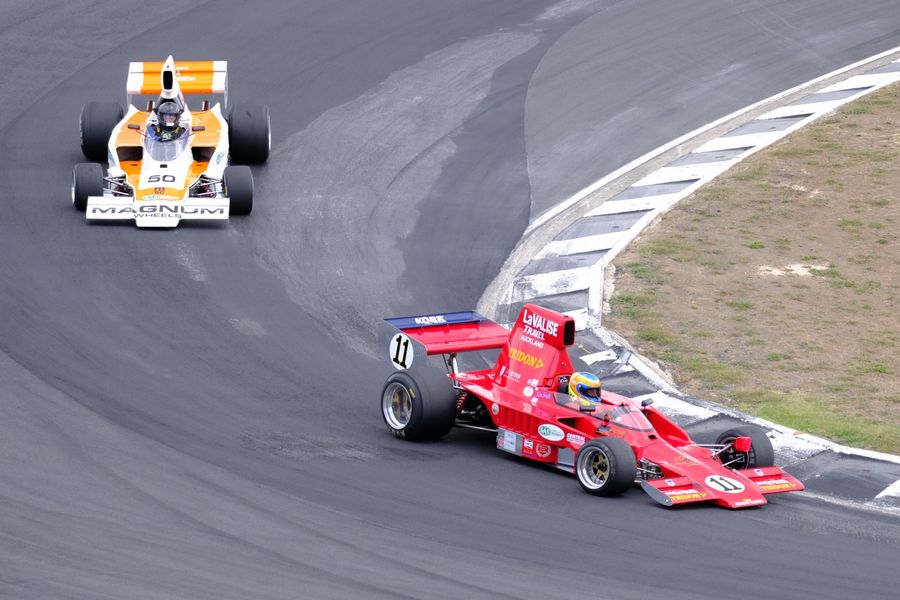 There was a poignant moment at the final round of the 2018/19 SAS Autoparts/MSC NZ F5000 Tasman Cup Revival Series at the big Legends of Speed meeting at Hampton Downs today, as the winner of the final race of the season, Ken Smith, was presented with his trophy by fellow category original Graham McRae.

‘It’s an honour to be presented with this trophy by someone who I rate as one of the best Formula 5000 drivers ever,” Smith said of his respected former rival as the pair were surrounded by well-wishers at an impromptu function in the pit lane at the Hampton Downs circuit after the 12-lap SAS Autoparts MSC series final this afternoon.

McRae, now 79, was the dominant figure in the Formula 5000 category through the early 1970s, winning the original Tasman Series three years in a row (1971, 1972 and 1973) and also the 1972 L&M Continental 5000 Championship in the United States in cars of his own design. He also qualified for and started the 1973 British Formula 1 Grand Prix in a Cosworth-powered Iso-Marlboro entered by Frank Williams and won the Rookie of The Year award at the Indianapolis 500 the same year.

Smith enjoyed a similarly successful career closer to home, but unlike McRae, who eventually retired from full-time driving to focus on designing and building racing cars, never really stopped driving, to the point where at 77-years-of-age he has just completed his 61st consecutive season of national level motor racing here. To say he has done it in style is an understatement, too, the evergreen racing super-veteran claiming a record-extending sixth SAS Autoparts MSC NZ F5000 Tasman Cup Revival Series title with 12 wins from 15 starts, the final three, appropriately enough, at the Legends of Speed meeting at Hampton Downs this weekend.

The final 12-lap race for the event organiser HRC Events’ Alain Prost trophy, turned out to be quite an entertaining affair despite Smith again running away and winning it with apparent ease. The season’s Class A standout, Tony Roberts (McLaren M10B) livened up the opening lap with a spin exiting the first turn but was able to continue without the need for the Safety Car to be deployed.

A sign of just how strong the series’ mid-field battle-pack is this year came in the lap times, with Smith doing a best time of 1:01.170 but the next five race finishers – Brett Willis, David Banks, Glenn Richards (LolaT400), Aaron Burson and Kevin Ingram, all lapping in either the 1:02s or 1:03s.

Not surprisingly Ken Smith also won the other two SAS Autoparts MSC NZ F5000 Tasman Cup Revival Series races in similarly emphatic style. Earlier on Sunday morning he crossed the finish line in the second race of the weekend just over 14-and-a-half seconds ahead of David Banks who in turn had a margin of almost 6 seconds on third placed Glenn Richards and just over 7 on fast-finishing duo Brett Willis (Lola T330) and Aaron Burson (McRae GM1).

Former New Zealand Formula Ford champion Kevin Ingram (Lola T332) was the big mover on the first lap on that race, but paid for the late-braking prowess which saw him up to third place, with a severe front end vibration caused by the tyres he flat-spotted for a second time in two races.

He still managed to finish the race, albeit at a pace which saw Glenn Richards, Brett Willis and Aaron Burson quickly able to work their way back past, leaving Ingram back in 6th ahead of Frank Karl in the first of the Class A (for older model cars) McLaren M10Bs, then Peter Burson who enjoyed his first full distance race run in his ex-Larry Perkins 1977 model BRM P207 F1 car.

Unfortunately category stalwart Tony Roberts was forced to retire with what turned out to be a clogged fuel filter in the other McLaren M10B. A fuel issue also saw Tim Rush in his McLaren M10B retire after just two laps.

David Banks also followed Smith home in the first series’ race on Saturday afternoon, after setting a personal best lap time of 1:01.911 in qualifying and crossing the finish line just 2.260 seconds behind Smith in a race which saw the Safety Car deployed when Peter Burson’s BRM P207 F1 car slowed and stopped out on the track.

Though  the track went green with just one lap to go Smith again got the jump on the close running David Banks, Glenn Richards and Brett Willis trio who in turn edged ahead of Aaron Burson and Kevin Ingram but Ingram getting a better run off the final turn and beating Burson to the flag by a margin of just 0.024 of a second!