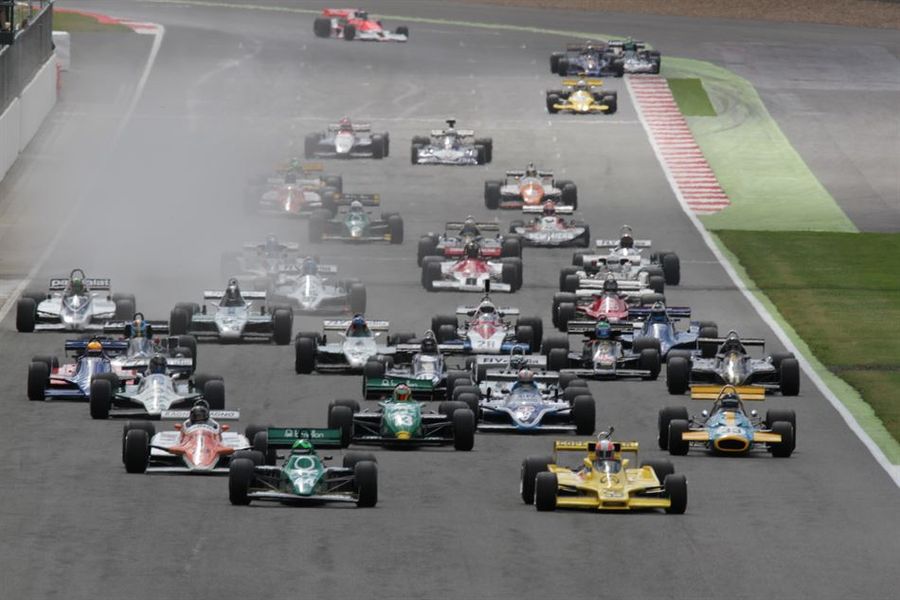 Masters Historic Racing has announced its 2017 European race calendar with an eight-event programme, including two new venues, themed around the major historic festivals.
Starting in April, Masters Historic Racing will mark a return to the Espiritu de Montjuic in Barcelona on April 8th and 9th after a year’s absence from the popular sunny season-starter. The home of the Spanish Grand Prix has always been a superb venue for historic single-seaters and sports cars and will be the ideal venue for the start of the 2017 season.
A month later, May 27th and 28th, Masters heads to its spiritual home as the Brands Hatch Grand Prix circuit once again welcomes its major historic racing weekend. With the circuit barely changed from the days when the period cars raced there, Brands Hatch has retained a special charm and the iconic Grand Prix circuit will be a popular venue for a magical trip down memory lane. For 2017 the Masters Historic Festival will be celebrating the 50th Anniversary of the DFV engine.
At the end of June, Masters will make a welcome return to France for the Grand Prix de France Historique at Magny-Cours (June 30th, July 1st and 2nd.) It has been many seasons since Masters last raced at the former French Grand Prix venue and will be a real challenge for many drivers. The event will be ably run by HVM Racing and has the full support of the FFSA. The French circuit with its mixture of fast corners and tight sections will be a great test for man and machine.
The Silverstone Classic will be mark the midway point on the Masters Historic Racing European Tour, the event moving forward a weekend to July 21st to the 23rd. Masters races starred at the 2016 edition with the FIA Masters Historic Formula One Championship being hailed as the races of the weekend and Masters categories will again headline the 2017 event.
The Oldtimer Grand Prix, Europe’s original historic festival, is the next stop for Masters Historic Racing on August 11th to the 13th. The Nürburgring has always attracted big entries and tempts out cars that don’t often race at other Masters events, so the entry is likely to be a fabulous one and generate some excellent racing.
The next event of the season will be the ever-popular annual Zandvoort Historic Grand Prix, September 1st to the 3rd. The Dutch seaside circuit’s event has grown over the last few years into a must-do race weekend and will play host to a wide variety of memory-evoking cars in front of what is traditionally a bumper crowd.
The next stop is the Spa Six Hours event, always a highlight of the historic racing season and it will mark a crucial junction in the championship hopes of drivers as the season climax approaches.
For 2017, the season will end at another of Europe’s major historic race weekends, the Estoril Historic Festival on October 20th to the 22nd. The former home of the Portuguese Grand Prix is a circuit that many drivers will not have races at before, and hence its challenge will make it the perfect venue to settle the 2017 Masters Historic Racing championships.
Masters Event Director Rachel Bailey said: “We have listened to our competitors and tried to focus our calendar on their desires. We know which events are popular and hence we have ensured that we are part of the major events, and also tried to add something different into the calendar with a return to Barcelona and new events at Magny-Cours and Estoril. Every venue that we go to is either a current or previous Formula One venue, which offer great facilities, and superb venues for our cars to race at. It promises to be our best season yet.”
2017 Schedule:
8th and 9th April Espiritu de Montjuic, Barcelona, Spain
27th and 28th May Masters Historic Festival, Brands Hatch GP Circuit, UK
30th June - 1st and 2nd July Magny Cours, France, Grand Prix de France Historique
21st, 22nd and 23rd July Silverstone Classic Silverstone GP Circuit, UK
11thm 12th and 13th August Oldtimer Grand Prix, Nürburgring, Germany
1st, 2nd, 3rd September Historic Grand Prix Zandvoort, Holland
22nd, 23rd, and 24th September Spa Six Hours Spa, Belgium
20th, 21st and 22nd October   Estoril Historic Festival, Estoril, Portugal
Masters Historic Racing Masters Champions