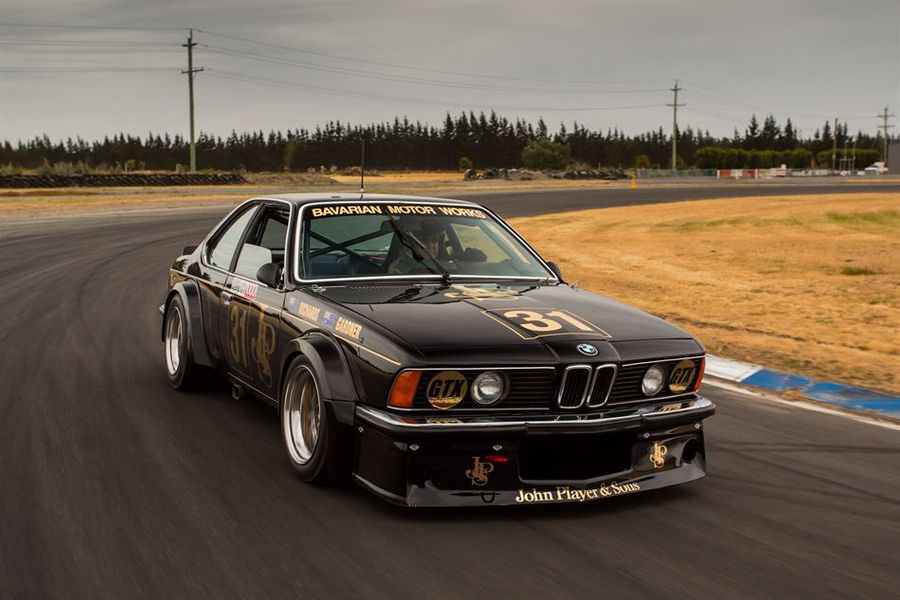 Touring Car racing has long appealed to Kiwi motor racing fans. And this weekend those attending the big 4 Guys Autobarn Legends of Bathurst meeting at the Hampton Downs circuit in the north Waikato are in for a special treat, the first North Island round of the Historic Touring Car (NZ) Association’s new Archibalds-backed series.
The Association was set up in 2015 to promote the purchase and active use of Touring Cars from the various categories which were run through the 1980s and 1990s, and with over 50 active car-owning members there is now enough ‘critical mass’ to sustain a new, standalone series.
Key car and driver combinations at the Legends meeting will be the Peter Sturgeon-owned, ex-Frank Gardner1983 Group C-spec BMW 635i to be driven by expat Kiwi Jim Richards, the similar but Group A-spec 1986 BMW 635i of top Kiwi Trevor Crowe, an ex-Gianfranco Brancatelli/Johnny Cecotto 1987 BMW E30 M3 (also owned by Peter Sturgeon) which will be driven by Jim Richard’s son Steven Richards, and a Mark Petch-owned 1986 Volvo 240T to be driven by Australian ace John Bowe.
The late 1980s and early 1990s were very much a golden era for Touring Car racing all over the world, with Kiwis in the box seat thanks to the Nissan Mobil 500 meetings at Wellington and Pukekohe, and free-to-air TV coverage of the annual Bathurst 1000 race across the Tasman, and both the British (BTCC) and German (DTM) Touring Car Championships.
A Volvo 240T like the one John Bowe is driving this weekend won the inaugural Nissan Mobil 500 street race event in Wellington while subsequent events were dominated by BMW 3-series models like the ex-Emmanuelle Pirro/Paul Morris DTM/ATCC E30 M3 being driven this weekend by Auckland owner Conrad Timms, the ex-Gianfranco Brancatelli/Johnny Cecotto E30 M3 being driven by Steven Richards, and the Zakspeed DTM E30 M3 of Auckland driver Graeme Cameron.
Also in the field this weekend will be the ex Kevin Waldock Ford Sierra Cosworth in the hands of long-time local owner, Brett Stevens from Nelson, the ex-Alan Prince/Michael Hourigan Group A Jaguar XJS recently rebuilt and to be driven by Angus Fogg, and the 1994 Ford Mondeo raced in period by Kiwi BTCC race winner and two-time World Touring Car Cup winner Paul Radisich, and now owned and driven by Invercargill’s Scott O’Donnell.
Christchurch man Steven Kelly, meanwhile, will be driving his International Motorsport (Auckland) NZ 2 Litre Touring Car Series-spec BMW 320i, while Christchurch pair Lindsay O’Donnell and Phil Mauger, and Australian ace Charlie O’Brien, will race some of the last (and most hi-tech) 2-litre BTCC/ETCC models, O’Donnell an ex Rickard Rydell/Kelvin Burt 1997 BTCC Volvo S40, and Mauger and O’Brien a pair of Nissan Primeras.
The Mauger Primera is an ex Team Dynamics/Matt Neal (BTCC) car, while O’Brien’s is a 1996 model owned by Association chairman Murray Sinclair.
With interest in buying, where necessary restoring, then race preparing these well-loved and remembered racing cars at an all-time high, Sinclair says that the category is a timely addition to the Legends’ programme.
“We have been very specific in outlining the categories so that we can use period FIA regulations to ensure authenticity across the various categories, i.e. Groups 2 and 5, Group A and Super Touring. Group C was peculiar to Australia but we included it so we had some commonality with the Australian Heritage Touring Group.”
“Our strong focus is on maintaining and racing these historically significant racing cars without attempting to embellish the originals or encourage the production of replicas. And, as a semi-formal Association we hope to be able to bring a field of Historic Touring Cars to events which mirror our philosophy and provide event organisers with a “made to measure” category they can promote.”
“It really was a fantastic era where companies were building cars on a cost-no-object basis. And we are very fortunate that many of the cars that were raced in period are still available for us to buy, bring back here and demonstrate in a competitive manner.”
The Archibalds Historic Touring Car Series cars will be on track from Friday with qualifying and a six-lap race on Saturday then two more six lap races on Sunday. Several class drivers will also be contesting the 4 Guys Autobarn Legends of Bathurst Invitational races over the two days.