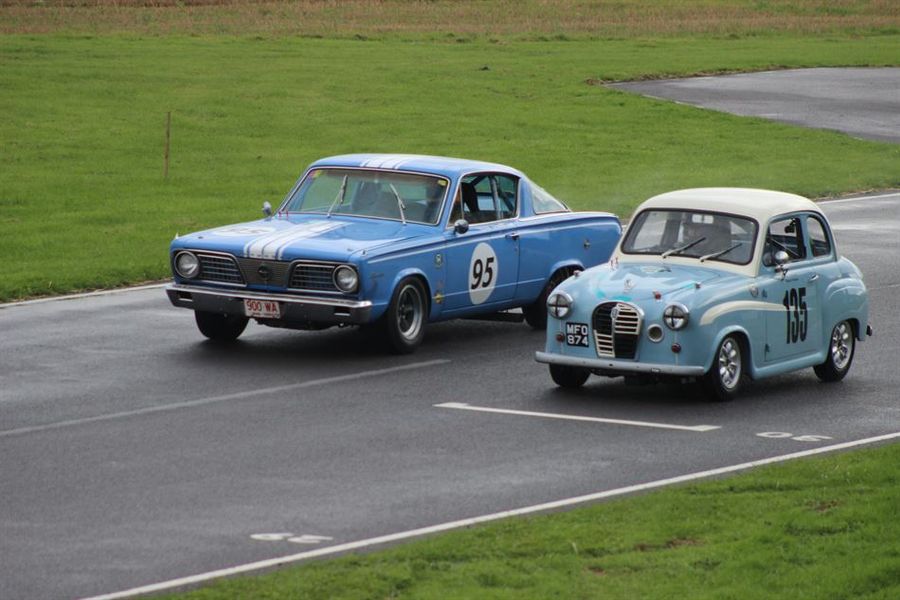 The weather was major factor in the fifth running of Castle Combe’s always entertaining Autumn Classic race meeting, heavy rain showers often lubricating the track only to be followed by sunny periods when the fine collection of cars racing or in the main parades entertained the impressive crowd. Nonetheless, the wet track provided some cracking race action, even with rather more spins than usual, to provide a great late-season historic day out.
Star guest was David Brabham, former Formula One driver, Le Mans winner and son of legendary triple world champion, Sir Jack. He demonstrated one of his late father’s cars from 1965, a Brabham BT11 single seater in the midday parade. Julian Bronson from Bristol drove his Scarab F1 car, fresh from its win in the Richmond Trophy race at the Goodwood Revival for front-engined Grand Prix cars.
The wet weather would have suited the four-wheel drive Ferguson P99 driven by Nick Adams, who was disappointed he could not show the car’s true capabilities in wet conditions in the parade.  Mark Hales showed off the almost priceless Ferrari 250 GTO of local Comb resident Nick Mason, complete with its 250 GTO registration number.
A safety car period and torrential rain greeted the first visit to the ‘Classic’ of the HRDC’s 'Coys Trophy' race for Touring Cars built between 1958 and 1966. The Minis were the cars to have in the treacherous conditions, with a number of drivers unable to see due to misted up windscreens.
Peter Crewes in his Cooper S led for most of the 45-minute race until retiring with a broken alternator, allowing the pole team of James and Richard Dorlin to take the victory from Paul Inch in another Cooper S. John Spiers in the Lotus Cortina brought the first rear wheel drive car home, with the rather unsuitable 4.7 litre Ford Falcon Sprint driven by Chris Clarkson in sixth.
Former ITV F1 pundit, Tony Jardine, drove his Mini Cooper S to seventh whilst 1998 Le Mans winner Andy Wallace was 11th in a  MkII Jaguar.
The 'Silverline' Historic Formula Junior championship race was won comprehensively by Peter De La Roche in his BMC Mk 2. Another winner by a mile was Sam Stretton, taking the Vintage Sports Car Club’s race for Pre-war sports cars by some 23s.
The Allan Cameron Healey Drivers Club Invitation Challenge for 3000’s, 100’s and special bodied Sprites comprised two 20 minute races, with the usual contingent of drivers from the Bristol area featuring strongly. The front row for race one was occupied by youngsters, with 19-year-old Jack Rawles on pole in his dad’s 3000 MKIIa and Jack Chatham alongside in the 3000 shared with his brother Oliver. Mike Thorne, was third fastest in his MkI 3000, with event sponsor Julian Bronson qualifying Steve Bicknell’s Healey 3000 fifth overall.
It was Chatham who made the best start, but as rain began to fall heavily, Rawles made an audacious pass at Camp, going on to win by 1.5s from Chatham. Thorne retired after going straight on into the barriers at Quarry, having made a slow start, whilst Bronson made a great start and finally took fourth.
Race two and the decider saw David Grace, the man who has won four Healey Autumn Classic races, make a flying start from 3rd on the grid, leading into Quarry, but hounded by Oliver Chatham with Rawles lying in wait. In the next three laps, Grace had dropped back to 3rd, with Rawles finding a way back through to the front and taking a narrow win from Chatham by 0.596s. Grace was a lonely third with Bronson retiring after a wire came loose, denying him all power.
The FiSCaR 'Inter-marque' race was again won by Steve Boultbee-Brooks in his Aston Martin DB3S who also took the Jon Gross Memorial Trophy race for Historic Aston Martins.
The Jaguar Enthusiast’s Club’s Norman Dewis Trophy race for pre '66 Jaguars was watched enthusiastically by Dewis himself, the 96-year-old legendary Jaguar test and development driver recalling his last race at Castle Combe in 1950 or 1951 (he couldn’t remember exactly!) in his home built 500cc race car known as a DNC. Winner was Kevin Zwolinski in his XK120.
The Bristol Aeroplane Company Motor Sports Club Challenge Trophy race for 500cc Formula 3 cars was another where rain played a part. As rain fell heavily, pole man Brian Joliffe, aged 79, spun out at Camp, the red flag bringing proceedings to an end on lap 8. Richard de la Roche, who led from the start in his Cooper Mk V, was declared the winner.
Club.
Castle Combe Autumn Classic