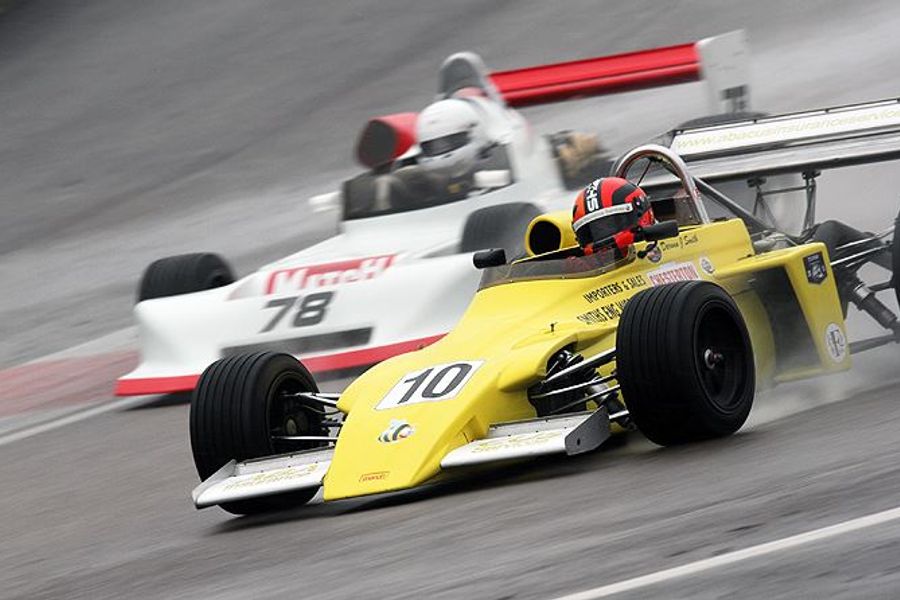 Frenchman Robert Simac secured the Historic Formula 2 FIA International Series for a third year running as races from the Historic Sports Car Club featured at both Dijon-Prenois and Castle Combe over the weekend (3rd and 4th of October).

Simac sealed the title in the penultimate race of the season at his home track of Dijon during the annual Motors Cup meeting and then won the 1600cc class again on Sunday to make it 10 class wins from 10 rounds in his March 712M.

Northern Irishman Darwin Smith (March 722) won the opening race as light rain made conditions tricky, but had Matthew Watts (March 772P) chasing hard and only six-tenths of a second split them at the flag. Mark Piercy (Lola T360) completed the overall podium.

In the dry second race, Smith jumped into his F2 car straight from an impressive Historic F1 debut in the Ensign of James Hagan, and led until forced into the pits with a throttle linkage problem. Instead, a close battle between Watts, Hans Peter (Ralt RT1) and Piercy became for the lead and just over two seconds covered them at the flag. Peter did well to race from the back of the grid after retiring from the first race due to lack of visibility.

Simac again took the 1600cc F2 class form Martin Bullock (Chevron B17C) while a wonderful battle raged for third between Paul Bason (March 712) and Roger Bevan (Lotus 69), who was going better than ever.

Also on the Dijon programme was the final event of the season for the new Pre ’80 Endurance Series, which is run by the HSCC in partnership with Flavien and Vanessa Marcais.

After winning two races earlier in the season, Italian racer Michele Liguori (Lola T292) added a third victory in the opening race with some rain providing a big challenge. John Burton (Chevron B26) and Kevin Cooke (Royale RP17) shared the podium but it was only after a mighty effort that Cooke scored such an impressive result.

On his first trip to Dijon, Cooke’s car hit problems in testing on Friday. Undeterred, they sourced replacement parts in Switzerland and managed to get the car ready in time for the race.

In the second race, the Lola T70 Mk3B of Simon Hadfield headed Burton by just half a second after 40 minutes of racing, while Liguori took third from the stunning Porsche 935 of Manfredo Rossi.

In Wiltshire, the annual Castle Combe Autumn Classic on Saturday included the penultimate round of the Silverline Historic Formula Junior Championship. A tremendous race delivered a unique double for the Woodhouse family. While Jack won overall in his Lotus 20/22, his father Mark won the front-engined battle in his Elva 100.

Jack got an early break when Westie Mitchell got the De Tomaso crossed up at the Esses. Once into second, Sam Wilson (Lotus 20/22) hunted the leader down and went ahead on the run past the pits. However, there was a final twist when Wilson caught a backmarker at Camp heading into the final lap and Woodhouse swept back ahead. “It was just an opportunity that came up,” said Woodhouse. “I thought I’d got it in the bag, but that’s how it goes,” said Wilson after his first race at Castle Combe. Typically, he was the first to congratulate Woodhouse on his win.

A little way back, another wonderful contest raged as Mitchell fought his way back to third ahead of Andrew Hibberd (Lotus 22), Peter Morton (Lightning Envoyette) and Stuart Roach (Alexis Mk4).

Bullen wriggled through to third behind Clarkson, but was then penalised five seconds for exceeding track limits and dropped back to fourth. Simon Benoy (Hillman Imp) was the best of the under 1300cc cars but only after a fine battle with the Mini of Chris Inch.