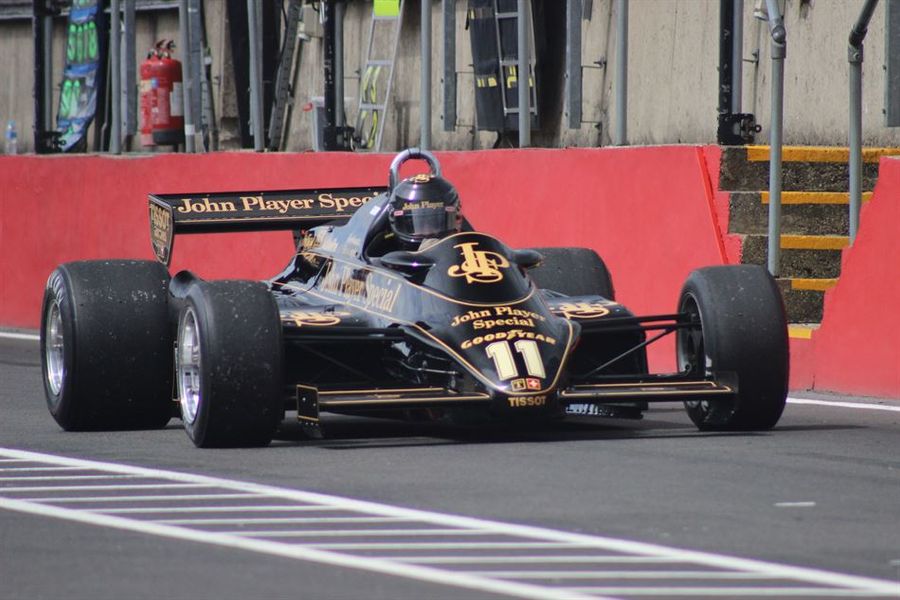 Picture: Lotus 91/5
The Goodwood 74th Members’ Meeting this spring will feature demonstration runs the ‘ground effects’ generation of Formula One cars, and Classic Team Lotus will be bringing along or looking after for proud owners seven of these high-downforce F1 cars. The West Sussex circuit will see two Lotus 78s, and examples of the Lotus 80, 81, 86, 88B and 91 on track in what promises to be a great weekend.
A number of teams and designers had got to close to a working ground effects car in the late 1960s and into the 1970s, in some cases without realising quite what they had stumbled upon, but it was Colin Chapman’s Lotus 78 that was the first effective solution. The principle involves controlling the air flow under the car and accelerating it to produce a low pressure zone, effectively sucking the car down on the track, and in Formula One in particular this airflow was controlled in a number of ways including the use of ‘skirts’ along the sides of the car preventing air from spilling out between the sides of the car and the road surface.
The use of ground effects also had the advantage of not adding to the drag of the car, so straight-line speed was not reduced, and after some experimentation Chapman settled on the use of flexible rubber skirts on the 78. The car was very effective and Mario Andretti took four wins and team-mate Gunnar Nilsson one in the 1977 season, and the other teas know they had to react in kind although Lotus went to some lengths to hide the true secret of their pace.
Having won the driver’s title with the Lotus 79, for 1979 the team wanted to go further and the Lotus 80 was designed fully around the ground effects theory, with the underside aerodynamics running the nose section to beyond the rear wheels. The concept was ambitious, and proved hard to tame, the centre of pressure under the car moving under acceleration and braking resulting in varying levels of downforce. Carlos Reuteman refused to race the car and used a Lotus 79, while Andretti only raced the car three times, taking a third at the Spanish GP, before also opting for a 79.
Under pressure from other teams who now fully understood the principles involved, Chapman reacted gain by looking for his characteristic innovation. The Lotus 86 had been designed as a skirted ground effects car but only one prototype was built and used in testing through 1980. From that car the team developed the Lotus 88, which uniquely featured what were essentially two chassis, one inside the other.
The outer chassis was effectively wingless and acted as one large ground effect device generating downforce from nose to the rear axle, while the inner was independently sprung and held the cockpit, Cosworth DFV engine etc. This time team drivers Nigel Mansell and Elio de Angelis were happy with the handling and behaviour of the car, which also featured extensive use of carbon fibre for the first time.
While the team and drivers were pleased their rivals were not, and protested to the FIA that the twin chassis were effectively moving aerodynamic devices and thus illegal. Despite the numerous prostrations of Chapman this was ultimately upheld and the innovative car never raced in period, the team having to use updates of the more standard 78.
While not strictly a ground effects car, the Lotus 91 was a typical innovative Lotus reply to the change on regulations for 1982 and was fitted with an early form of active suspension to control ride height and pitch. The car gave de Angelis a win at the Austrian GP at a time when the turbo-engined cars had a power advantage over the Cosworth powered Lotus, the final win for the team while under Chapman’s control.
The FIA banned ground effects for the 1983 Formula One season by making a flat bottom compulsory on cars.
Lotus 91/5The Goodwood 74th Members’ Meeting Classic Team Lotus Picture