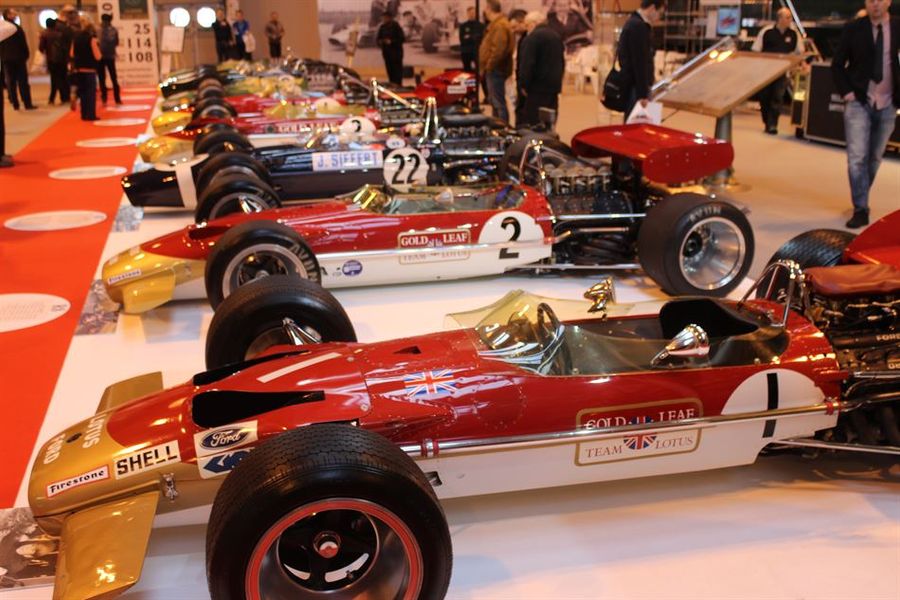 A highlight of Autosport International this year was the Classic Team Lotus area adjacent to the main stage which featured a stunning display of all seven surviving Lotus 49s - out of the nine that were built. We took the opportunity to speak to Clive Chapman about how the display came together.
“Autosport International were generous enough to give us a big area, so as it was 50-years of the Lotus 49 we contacted all the owners and asked if they would be interested in participating,” explained Clive. “We are pretty sure all seven surviving 49s have not been in one place at the same time, and when everyone said ‘yes’ we just had the challenge of getting them all physically together.
“The owners have ben extremely generous, they all own their cars for the right reasons and and are proud of being responsible for them, and seem to get a kick out of the team effort of getting them all here.
“You can really see the evolution of the 49. We have R2 and R3 in the original green and yellow colours and they are very much the early-spec cars, then you see the Gold Leaf livery appearing and going through into the later cars.
“The performance of the 49, compared to the giant leap it represented when it appeared, wasn’t that great over the next four years, maybe a second or so a lap as the engine got more powerful, aerodynamics were developed - but didn’t give that much downforce - and the tyres got grippier. The cars never ran on slicks but it was the big step change in performance they represented in 1967 that was the key to their success.”
A feature of the Classic Team Lotus stand at last year’s Autosport International was the unveiling of a new - and unique - restoration project, the Lotus 56 turbine-powered car, and we asked Clive how that project was progressing:
“The turbine engine for the 56 has at least turned up! It was very frustrating last year that it got delayed en-route and we have done some preliminary work on the transmission and on creating se new bodywork that we can preserve the old. In terms of getting the car into the bodywork it needs a slot, and we decided the only way is it build a bigger workshop! Work on that started last Monday and hopefully by the end of the year we will be in a much bigger building next door to where we are now, and that will give us a chance to finish that project.
“Time is also an issue, we were really busy last season and did 25-race meetings, 114-race starts and 108-finishes - which is a great record with classic race cars, our drivers don’t hang around and tend to be flat-out! This year we may be doing around 20-meetings, but it will till be busy we have a lot of restoration projects in particular the Lotus 33 which has featured the media recently - it’s a privilege to have that car in the workshop and exactly the sort of thing we love doing at Classic team Lotus.
“The owner of the 33 is not in a hurry , before we do anything on it we will have the car at Race Retro in February, and it will take its natural time - so maybe compete by the end of the year.”
Autopsort International Chapman Lotus 49 Clive Chapman

Sticker of the Day No.2: Vaillant-Porsche-Kremer-Racing Team