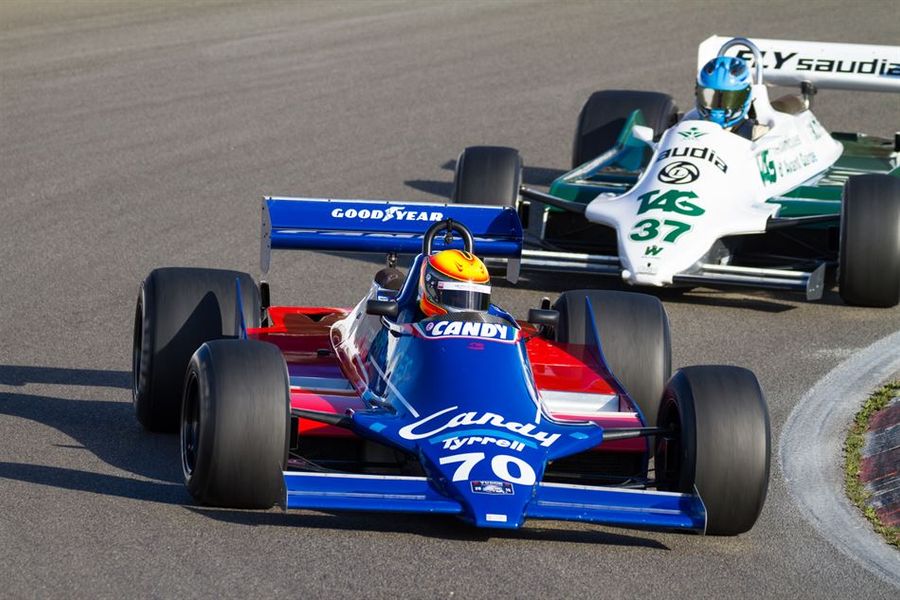 Michael Lyons was the star at the Historic GP meeting at Zandvoort, leading most of the first race and winning the second race of the FIA Masters Historic Formula One Championship double-header on the classic Dutch track. Only brake problems in the first race prevented him from a clean sweep, gifting Saturday’s win to championship leader Loic Deman.
Michael Lyons beat front-row man Deman (Tyrrell 010) and Rob Hall (Ligier-Matra JS17) into the first corner after a blinding start in the opening race, but after leading much of the race was forced to drop back when his Hesketh 308E encountered severe rear-brake problems. This gifted Deman his sixth win of the season. The Belgian headed home Hall and Andy Wolfe (Tyrrell 011). Lyons hung on to finish fourth and took pre-78 honours ahead of Nick Padmore (Surtees TS9B) and Jamie Constable (Shadow DN8).
On Sunday, Hall got the jump on poleman Deman and led the Belgian with Lyons in third. The Hesketh was soon leading, though, after two decisive early-race moves within the space of one lap, Lyons using a clever switchback manoeuvre to pass Hallís Ligier. This time, Lyons ran out the race comfortably ahead of Hall and Wolfe, while Deman ran into trouble and fell back to fifth. Nick Padmore (fourth overall in his Surtees TS9B) and James Hagan (Ensign N177) completed the pre-78 podium.
Saturday's Pre-66 Touring Car fixture proved very much a two-horse race, as both the Leo Voyazides/Simon Hadfield Ford Falcon and the Alex Furiani/Frank Stippler Alfa Romeo GTA lapped the entire field. The Falcon made the early running but it was the GTA that scored the race win once Stippler had taken over from Furiani. Armand Adriaans added a bit of local colour by finishing a distant third in his Ford Mustang.
The Gentlemen Drivers Pre-66 GT race included lots of local interest, as Dutch historic racers David Hart and Hans Hugenholtz added international stars Giedo van der Garde and Tom Coronel to their two-car AC Cobra line-up. It was Simon Hadfield, however, who snatched pole from Van der Garde in a last-gasp attempt, and the Cobra Daytona CoupÈ he shared with Leo Voyazides duly took the lead in the 90-minute enduro.
In the end they scored a comfortable win after the Hart/Van der Garde threat evaporated. This was due to a 15-second stop-and-go penalty for the Dutch pair as the driver change was cone one lap short of the pit window opening but Hadfieldís lead already looked secure when Van der Garde had to serve his penalty. The forced stop allowed Julian Thomas/Nigel Greensall (Jaguar E-type) to take second, while Van der Garde charged back from sixth to claim the final podium position for the two Dutchmen.
For the locals, Hart was again the focal point in Sunday's FIA Masters Historic Sports Car Championship race. He was running second to Jon Minshawís similar Lola-Chevrolet T70 Mk3B when he challenged for the lead at quarter distance. Contact ensued, leaving Hart's Lola with damage and missing its right-hand door. While the Dutchman was forced to retire, Minshaw continued and handed his car to Phil Keen for a dominant win.
Not having set a time in practice, Leo Voyazides/Simon Hadfield put in a storming drive through the entire field to take second place in their T70 Mk3B while Michael Gans/Andy Wolfe rounded out the top-three in their Lola T290. Mark Bates (Porsche 911 RSR) and Keith Ahlers/Billy Bellinger (Cooper Monaco ëKing Cobraí) took class honours. The race was red-flagged right at the end after Michael Lyons (guesting in Manfredo Rossiís Osella-Abarth) had to abandon his car on the track, beached after having lost a rear wheel.
The next stop for Masters Historic Racing is the annual Spa 6-Hours on September 18th to 20th.