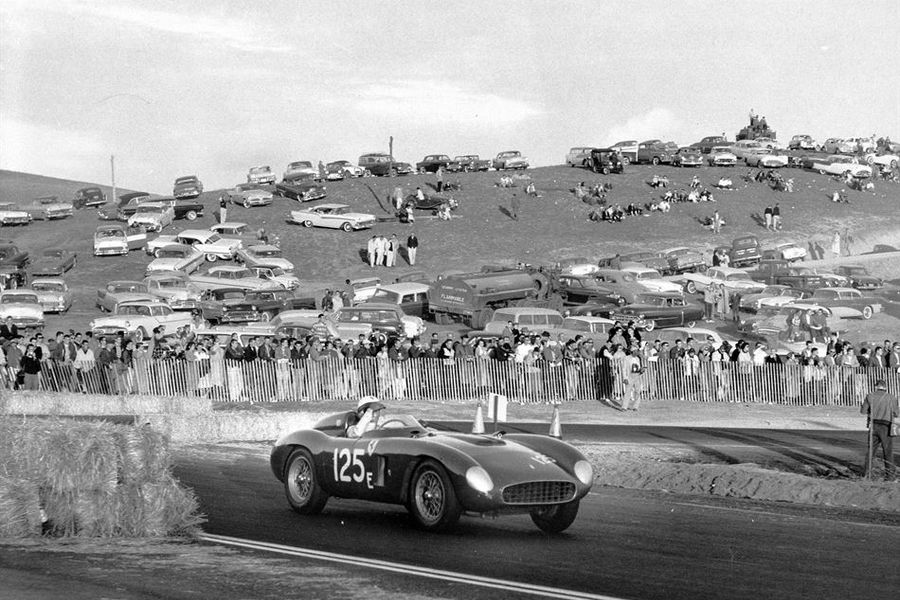 Picture: Pete Lovely, Ferrari 500 Testa Rossa
Rolex Monterey Motorsports Reunion attendees will have the chance to gaze upon 60-years of Mazda Raceway Laguna Seca racing history in the paddock on August 17th-20th. A special Racing Through the Decades feature display will showcase 12 prominent racing vehicles with history at the iconic circuit.
The contrast will be prevalent with the first and most recent winners at Mazda Raceway Laguna Seca being displayed across from one another. The 1956 Ferrari 500 Testa Rossa that Pete Lovely drove to victory at the inaugural Laguna Seca event, the Pebble Beach Road Races in 1957, and the 2016 K-PAX Racing McLaren 650S GT3 that Alvaro Parente won the Pirelli World Challenge event in last October will bookend a dozen chapters of motorsports in the Monterey Peninsula under one tent.
The display will include a 1956 Porsche 356A Carrera that competed in the last Pebble Beach race, a 1963 Shelby King Cobra, a 1971 Ford Mustang Boss 302, a 1973 Porsche 917/30, a 1983 March Indy Car (the first to win at Mazda Raceway Laguna Seca), a 1985 Porsche 962, a 1993 AAR Toyota Eagle, a 1999 BMW V12 LMR, and a 2005 Audi R8, all with unique ties to the 2.238-mile circuit. Fans will also be able to get up close and personal with Wayne Rainey’s 1989 Yamaha YZR500 that he rode to a win at the 1989 U.S. Grand Prix, his first of three consecutive victories in Monterey.
Located in the paddock, fans will have a chance to see the race cars that helped make Mazda Raceway Laguna Seca famous (and vice versa) during the prestigious event where 550 race cars of historic provenance will do what they were designed to do – race – throughout the weekend during a hallmark of the acclaimed Monterey Classic Car Week.
“The yearlong celebration of Mazda Raceway Laguna Seca’s 60th anniversary is brought to life in the Racing Through the Decades feature display that we are thrilled to share at the Rolex Monterey Motorsports Reunion,” said Gill Campbell, Senior Vice President of Event Operations of Mazda Raceway Laguna Seca. “The visual element illustrates the history and importance of the race track and the privilege we have had in hosting some of the greatest cars and drivers in all of motorsports.”
Rolex is an avid supporter of the internationally acclaimed Monterey Classic Car Week and has been title sponsor of the Rolex Monterey Motorsports Reunion since it was renamed in 2010. Every year a driver from each group is selected for their overall excellence in the race and receives a Rolex Award of Excellence. The event’s top honor of a specially engraved 18-karat yellow gold and stainless steel Oyster Perpetual Cosmograph Daytona is awarded to the driver who excels in the Spirit of the Weekend. Rolex’s involvement with motorsports runs deep, having been associated with the famed Goodwood Revival since 2004 and, most recently, as a Global Partner and Official Timepiece of Formula 1.