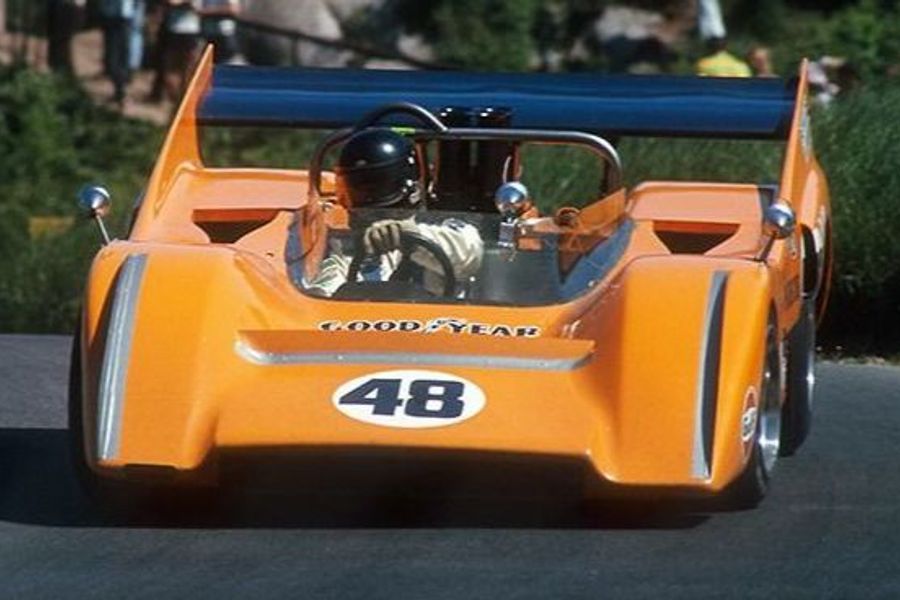 Twenty years after earning his second consecutive Formula One drivers’ championship, Mika Häkkinen will demonstrate his driving talents behind the wheel of the 1970 McLaren M8D/3 “Batmobile” at the Rolex Monterey Motorsports Reunion on August 15-18 at WeatherTech Raceway Laguna Seca.

American racing legend Dan Gurney and British Formula One driver Peter Gethin each raced the “Batmobile” during the 1970 Can-Am season as teammates to Denny Hulme following the tragic loss of Bruce McLaren. Gurney drove it during the first three races of the season, winning twice from the pole position at Mosport and Mont-Tremblant. Gethin raced the car seven times, scoring a victory at Road America along with two other podiums. The car was used as a spare for Bruce McLaren Motor Racing drivers Peter Revson and Denny Hulme in 1971 and was in privateer hands from 1972 to 1974.

The vivid papaya-colored race car is powered by a roaring 7.6-liter Chevrolet engine. The high strut-mounted rear wing of its predecessor – the M8B – had been banned by Can-Am, so the M8D's rear wing was mounted low on fins, earning the car’s "Batmobile" nickname.

The McLaren team dominated the 1970 season with nine wins in the 10-round championship. McLaren drivers Bruce McLaren, Denny Hulme and Peter Revson had won five straight Can-Am championships from 1967 to 1971.

This will mark the third consecutive year that Häkkinen, who had not previously driven at WeatherTech Raceway Laguna Seca, will make demonstration laps at Rolex Monterey Motorsports Reunion. He drove the 1974 McLaren M23 in 2017 and the 1995 McLaren F1 GTR in 2018.

"This track is fun, really enjoyable," said Häkkinen. "The track goes up and down, and some of the corners have great camber. It looks tighter than it is from a distance, so you need a lot of guts to brake later and take the right line."

Häkkinen will make spirited exhibition laps in the M8D/3 in the noon hour during the first three days of the four-day event. The Rolex Monterey Motorsports Reunion takes place August 15-18 and will honor the 50th anniversary of the International Motor Sports Association (IMSA).