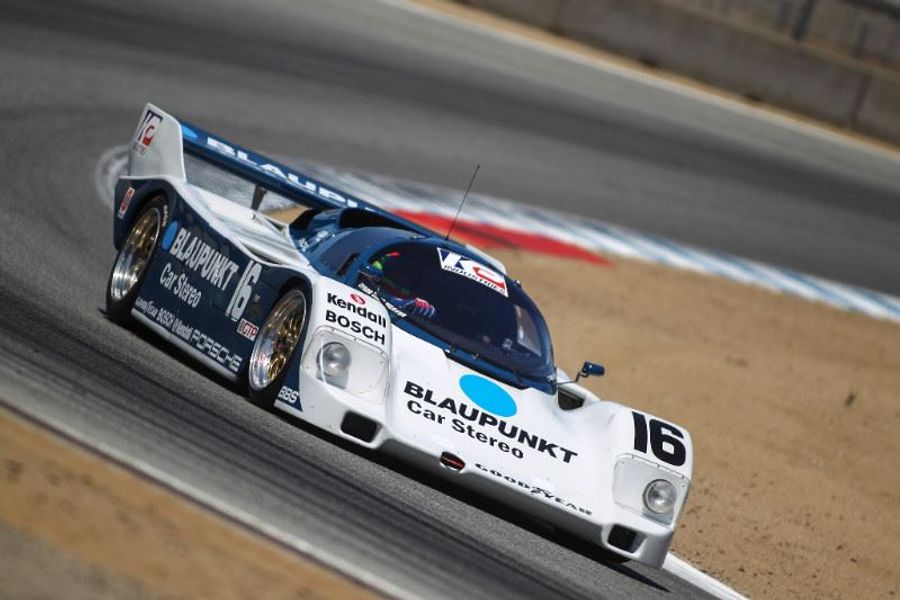 United Autosports made its fourth appearance at the annual Rolex Monterey Motorsports Pre- and Reunion events in California (12th to the 21st of  August) and came away with three podiums including a victory at the prestigious historic racing events. Zak Brown scored his second consecutive triumph in the 962 when he won the 11-lap race from pole-position around the 11-turn, 2.238-mile Mazda Raceway Laguna Seca during the Pre-Reunion event.
Brown, having swept the ex-Dyson Racing 1986 Porsche to victory at the Le Mans Classic recently, repeated the feat in California to replicate his 2014 Monterey win – Stefan Johansson having also won in the same car in the corresponding event in 2012. It looked as though United Autosports would have two cars on the podium in the race, Richard Dean a solid third until he pitted the Mustang on the last lap with a broken third gear. In the Pre-Reunion’s second race, Brown started the 962 from pole on the 28-car grid but had to be content with second place at the chequered flag. Unfortunately Zak missed the Reunion’s 962 Sunday races due to business meetings at Pebble Beach.
The 1982 IMSA Camel GT Championship winning Porsche 935 began Saturday’s Reunion weekend race from an excellent sixth on the 49-car grid with Brown sweeping into fourth after the first corner. However, Zak was forced into retirement with a gearbox problem – an issue that caused the “JLP-3”, the ex-John Paul Sr/Jr Porsche, to scratch from the second race later that day.
“The Rolex Monterey Reunion was another fantastic experience,” said Brown. “A great variety of cars in every class and a superb opportunity to see lots of friends in the paddock that included one of United’s ex-racers Stefan Johansson and Dario Franchitti who I drove with on the ‘Highland Tour of Scotland’ last year. I absolutely adore the 962 and I was so happy to add another win with the Porsche after my recent Le Mans success. I was disappointed I was prevented from racing today but I wasn’t feeling 100% and I needed to be at a couple of business meetings. I’d love to bring over the Audi 200 quattro Trans-Am that we’ve just purchased for next year’s Reunion but whatever United will be back.”
Dean started the Scott Pruett 1986 IMSA GTO Championship winning Roush Protofab Mustang from the fifth row of the 1981-91 FIA/IMSA GTO/GTP grid for its first race today, made up two places on the opening lap and was fifth by lap two. Richard took the chequered flag fifth after nine-laps, his was the highest-placed Mustang in the 43-car field – finishing less than 25 seconds behind the race-winning Porsche 962C. Dean started the second race fifth but had the audacity to challenge the more modern machinery for third place at the first turn, Richard having to settle for fourth at the end of the opening lap. Ultimately Dean brought the Mustang home a fantastic third after a titanic battle over the last two laps to earn United Autosports a praiseworthy third podium finish of the double-header meeting.
“It’s been another memorable trip to Monterey and to this unique event,” said Dean. “Our team has worked very hard over here for over two weeks prepping our four cars, our Pre-Reunion victory and additional rostrum was as much down to their hard work. I thoroughly enjoyed my races in the Mustang – the rear wheels are spinning in every gear – and that’s in the dry – and I was pleased with a rostrum in our last race."
Unfortunately due to Brown’s track absence on Sunday, the 1980 Williams FW07B did not get to race – Zak having qualified the previous day on the 1967-84 Formula One car grid which included former four-time Grand Prix motorcycle racing World Champion Eddie Lawson.
Laguna Seca 962 Rolex Monterey Motorsports Reunion United Autosports ex-Dyson Racing 1986 Porsche Le Mans Classic Zak Brown