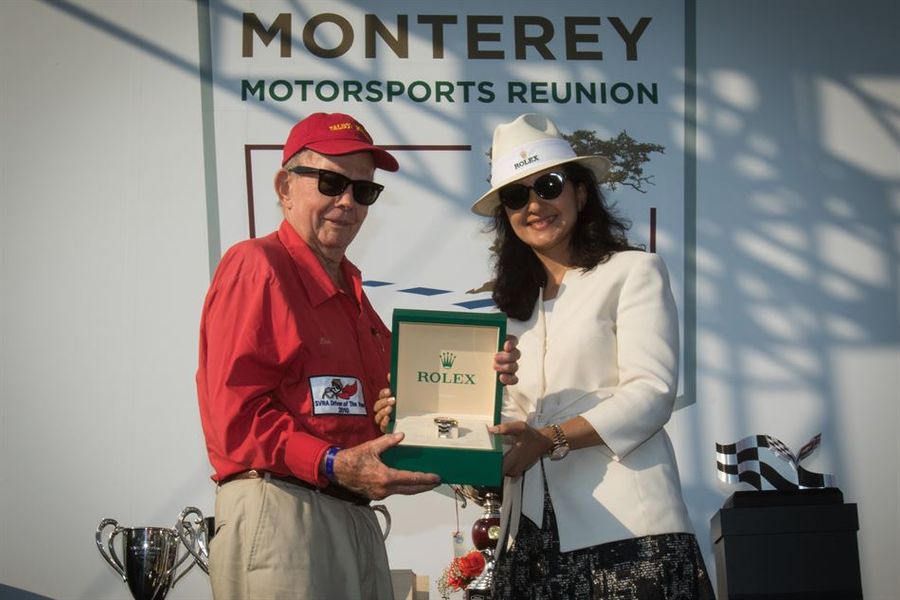 Automotive and motorsports enthusiasts from around the globe flocked to the scenic Monterey Peninsula to see some of the most historically prominent automobiles in the world gathered for Monterey Classic Car Week. The Rolex Monterey Motorsports Reunion is the only event during the week where vintage race cars do what they were originally designed to do – race!

Monterey Classic Car Week officially kicked off on Friday, August 11th, when 27-vintage race cars drove from Mazda Raceway Laguna Seca to Alvarado Street in Downtown Monterey for a full and festive celebration. That weekend’s Monterey Pre-Reunion attracted over 300 participants over two days, and the extravaganza that is the Rolex Monterey Motorsports Reunion lived up to its sterling reputation as the largest gathering of historic road-racing vehicles in North America with over 500 such classic racing machines on August 17th-20th.

The final day of racing that decided Rolex Race winners in the seven B run groups concluded with a special ceremony that crowned several award winners including one participant who earned The Spirit of Monterey Award with a specially-engraved Rolex stainless steel 18k Gold Daytona Cosmograph and a portrait of the race-winning Ferrari from the 1957 event by artist Bill Patterson. The award, given to the driver or entrant who excels in the spirit of the weekend, was fittingly given to a driver that had participated in the first event at the iconic track in 1957 during a Rolex Monterey Motorsports Reunion that celebrates the 60th anniversary of Mazda Raceway Laguna Seca.

Dr. Lee Talbot, Ph.D, was bestowed with the honor. Competing in his 1967 Ginetta G4 sports car at age 87 with the same spry enthusiasm he had for motorsports six decades earlier, the accomplished racer and scholar in the field of environmental science from McLean, Va., demonstrated the passion, prestige, and history that was tangible throughout the paddock and marketplace throughout an outstanding event.

The Formula Junior group continued its Diamond Jubilee World Tour with a huge outing of 64 Formula Junior entries across two separate run groups. Elsewhere in the paddock, 12 race cars pertinent to the history of Mazda Raceway Laguna Seca including the Ferrari Testa Rossa that Pete Lovely drove to the overall victory at the track's inaugural event in November 1957 were showcased in the Racing Through the Decades feature display.

“What a wonderful weekend of spirited racing,” said Mazda Raceway Laguna Seca’s Gill Campbell. “Congratulations to Dr. Talbot and all of the race and award winners. A heartfelt thank you goes out to all the participants who brought their fabulous cars, the Formula Junior groups, the Governing Committee, HMSA, SCCA, SCRAMP, the entire staff of Mazda Raceway Laguna Seca, our hard-working volunteers, our incredible fans, and the support from these companies: Rolex, Mazda, Michelin, WeatherTech, Mothers Polish, and Bonhams. We appreciate all the efforts that go into making this such a special event, and we are already planning for next year.”

A television special of this event put together by The Enthusiast Network will air on CBS Sports Network on August 24th at 10 a.m.

For those making plans for next year’s Rolex Monterey Motorsports Reunion, remember that the event takes place on August 23rd-26th, 2018. The Rolex Monterey Motorsports Reunion, along with all other major Monterey Classic Car Week activities, has been moved one week later from their traditional spots on the calendar to accommodate the U.S. Amateur Golf Championship at Pebble Beach Golf Links August 13th-19th.