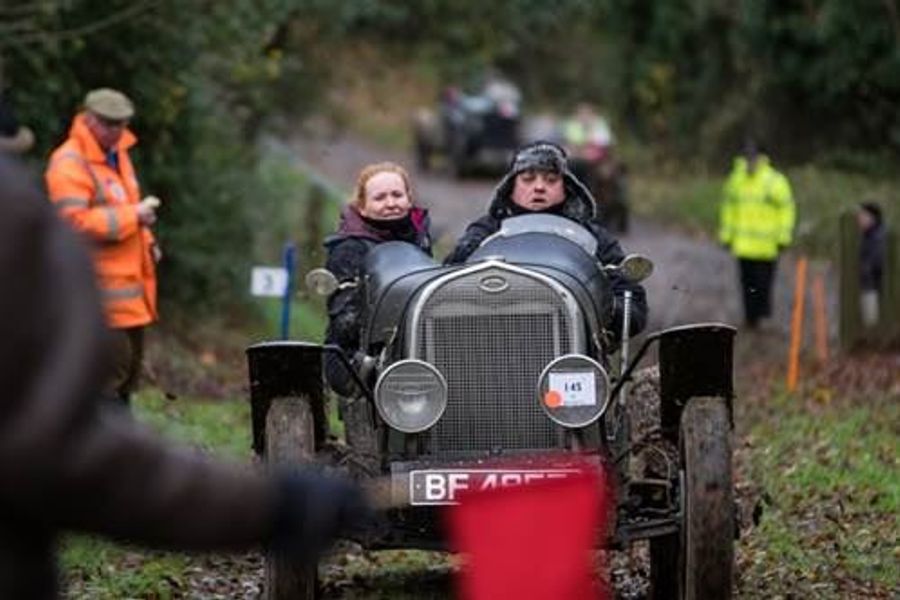 Picture: Simon Price and Karen Davies  in the 1930 Ford Model A Trial Special (John Hallett)
An expert display saw Simon Price score a perfect round to take the Harold Powell Plate for overall victory at the Vintage Sports-Car Club’s annual Cotswold Trial, based at the Prescott Speed Hill Climb in Gloucestershire on Saturday 19th of November.
Powys-based Price and ‘bouncer’ Karen Davies were the undoubted standout crew of a capacity entry of over 100 pre-war cars, scoring the maximum total of 385 in their 1930 Ford Model A Trials Special across the day’s fourteen off-road sections located at Prescott, home of the Bugatti Owners’ Club, and on private estates in the neighbouring Gloucestershire countryside.
Heavy rainfall across the preceding couple of days ensured sections would provide a slippery, muddy challenge for Competitors – although thankfully the day itself proved a cold, crisp but mainly dry backdrop for proceedings. And it was Price that led the way, powering to the top of each and every Hill, including a number of tricky sections that were catching out many of his nearest challengers in the early goings. The familiar trio of Johnston, Skelton (both Austin 7) and Golightly (Ford) were closely matched throughout but ultimately could not match the Welshman’s dominant performance.
Unsurprisingly the long wheelbase cars were finding the going difficult with John Higgs delivering a surprise class victory in his Morris Cowley, whilst Ben Collings gave perhaps the day’s other top performance as he piloted the mighty 1903 Mercedes 60hp – the oldest competing car of the event – to an incredible fourth place amongst the larger cars.
Those cars classified as ‘Standard’ by the Club also enjoyed a demanding competition as Mike Littlewood topped a Ford Model A-dominated long wheelbase class in his 1930 example ahead of perennial leader, Dennis Bingham in his similar model. Matthew Blake was a worthy winner amongst short wheelbase entrants in his 1922 GN Vitesse, claiming the Inderwick Cup as top Standard Pre-1931 Vintage performer.
A unique feature of the VSCC Cotswold Trial is the inclusion of a Novice Class, which saw a popular Cotswold Cup victory for 21-year old Hughie Walker, enjoying a debut Trial for his 1930 Austin VAT 69 – a vintage trials Special based on an Austin 7 chassis, powered by a 1923 ABC Scorpion 1200cc Flat Twin engine.
A fantastic turnout of spectators was on hand to watch the action at Prescott throughout the afternoon, where competitors put on an exciting display as they completed the final four sections before the day’s results were announced in front of a packed gathering in the welcoming surroundings of the clubhouse.
The Vintage Sports-Car Club would like to thank the organising team for a fantastic Trial, led by Clerk of the Course, Derek Howard-Orchard, as well as the army of volunteer Marshals, who braved the wintry conditions to oversee the successful competition.
VSCC Cotswold Trial Trials VSCC Trials