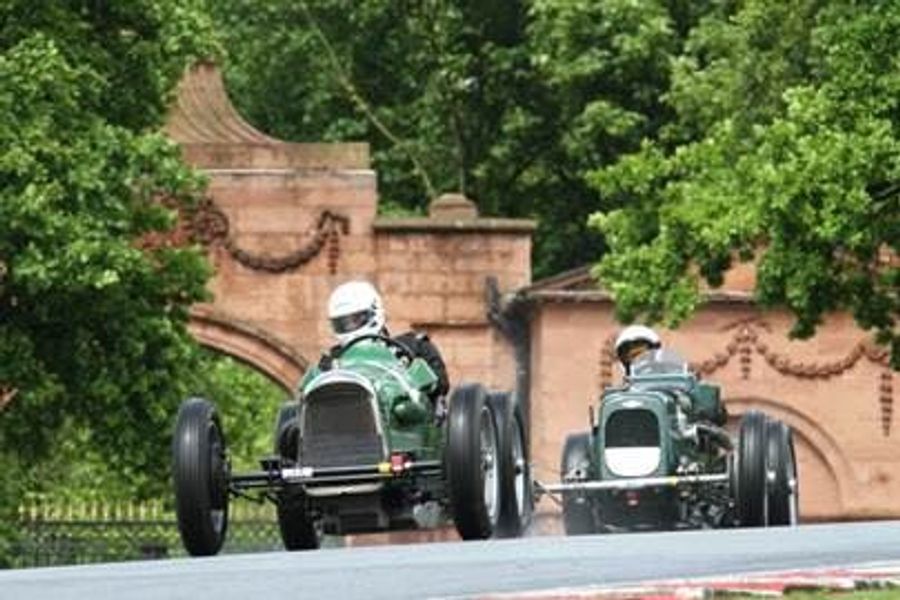 Following their successful opening event at Silverstone last month,the VSCC now look forward to round two of our Formula Vintage race season at Oulton Park on Saturday 10th of June.
The VSCC has enjoyed a long and celebrated history at the venue, dating back to the acclaimed events of the 1950s and 60s, and the club are once again bringing their unique brand of racing to the full ‘International’ configuration of the Cheshire circuit. The day will see the Club’s historic Hawthorn Memorial Trophies featured, with the usual prestigious Trophy Races in honour of one of the great British racing drivers.
An undoubted highlight at Oulton Park through the years, the Boulogne Trophy Race for Pre-1931 Vintage Racing Cars will be a headline act again with thrilling wheel-to-wheel action assured. Can anyone challenge the leading pair over the past couple seasons, in Tom Walker’s Hispano-Amilcar or Tony Lees, winner last year in the AC/GN ‘Cognac’?
The day’s title feature is named in honour of Mike Hawthorn, Britain’s first Formula One World Champion in 1958 for Ferrari, the golden era represented by the Pre-1961 Racing Cars.  As ever the Pre-war challenge will be led by three ERAs, including Nicholas Topliss in R4A, one of several previous winners of the club’s illustrious Motor Sport Brooklands Memorial Trophy on the grid, the very same silverware won by Mike Hawthorn in 1951.
Look to the Club’s celebrated Standard and Modified Pre-war Sports-Cars to set the standard once more with another capacity grid of original road-going machinery taking part. Having won last time out at Silverstone, Andrew Mitchell heads the entry in his HRG, alongside perennial podium challengers in Mark Brett’s Ballamy-Ford, the battling Frazer Nashes of husband/wife duo Simon and Jo Blakeney-Edwards and ‘ODM’ ambassador, John Guyatt in his Talbot-Lago.
Scheduled to open the afternoon’s racing programme, the Oulton Park Trophy pits the fastest of the club’s Pre-war Sports-Cars head-to-head. Having lost out at Silverstone, Dougal Cawley is sure to have the bit between his teeth to return to the top of the Special Pre-war Sports-Cars standings in the all-action GN/Ford ‘Piglet’ but will face a stern test from the traditionally strong Riley entry.
Ever-popular All-Comers Scratch and Handicap formats will complete the exciting pre-war programme whilst, to complement the day’s VSCC content, we also look forward to hosting special invited grids for Classic Ferrari, the Fifties Sports Cars (FISCAR) Blaster Bates Trophy Race, F3 (500)s and another round of the AR Motorsport Morgan Challenge Series.
Aside from the exciting action on track, Formula Vintage will again offer the Spectator all that is great about attending a VSCC Race Meeting, with open access to the paddock, where you can get up-close to the cars and drivers, onsite catering facilities – including a traditional afternoon tea style menu, trade stands, classic and vintage car displays and much more ‘vintage’ entertainment for the whole family.
The VSCC hosts another AutoSolo in the Paddock, the simple ‘Driving Tests’ competition for pre-war cars sure to provide plenty of entertainment during the morning, finishing ahead of the afternoon’s racing action, whilst the day also features the prestigious Cheshire Life Concours.
A stunning Spitfire replica will be at the heart of a military display, with the opportunity to sit inside the aircraft for a small charitable donation, and a fantastic assortment of period live music at the bandstand throughout the day, led by eight-piece band Max Debon & the Debonaires and the Backstep Boogie Club.
Our younger visitors will also enjoy Oulton Park’s motorsport-themed Adventure Playground with equipment for children of all ages from toddler to 14.