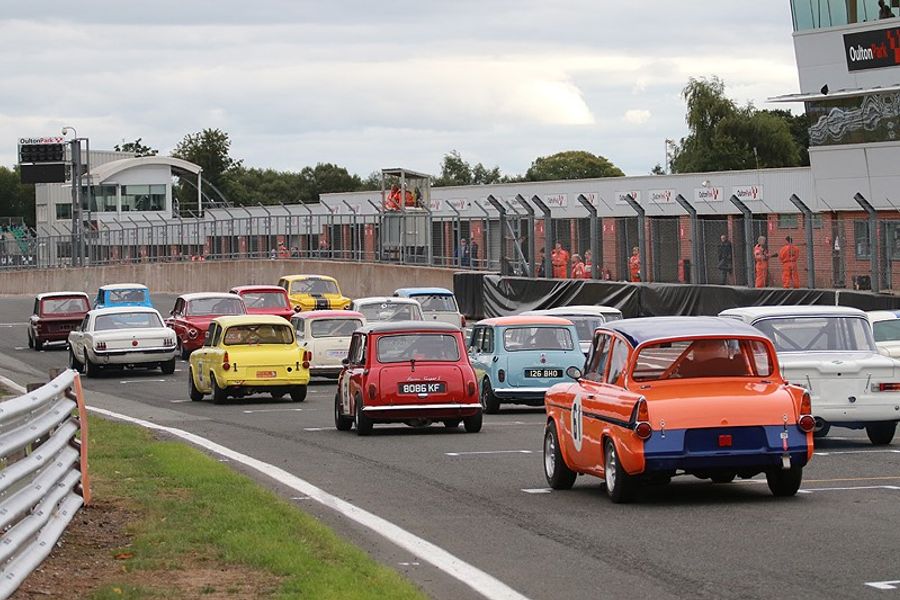 Some of the most spectacular single-seaters of a generation will contest two races for the HSCCs XL Aurora Series. 2019 marks the 50th anniversary of the first European Formula 5000 race at Oulton Park at Easter 1969 and the winner that day was Peter Gethin in his McLaren M10 while back in sixth place was the Lola T142 of US racer Horst Kroll. That Lola will be on the grid in the hands of Adam Simmonds. Other Formula 5000s include the glorious Gurney Eagle of Frank Lyons.

Australian racer Marty Bullock will race his wonderful ex-Alan Jones Williams FW06. This is one of two ex- Jones cars on the grid as Richard Ellingworths March 74B was used by Jones in Formula Atlantic in 1974. Other quick 2-litre cars include the Chevrons of James Murray, Mike Bletsoe-Brown and Clive Wood.

One of the first major championships of 2019 could be settled this weekend as Cameron Jackson is favourite to retain his Historic Formula Ford Championship title. However the Speedsport Merlyn squad has been a constant threat and newcomer Pierre Livingston is leading the chase of Jackson.

Making a welcome return to the championship for the first time since an accident at Cadwell Park more than a year ago is Nelson Rowe and he will surely be right back at the head of the action. Just as hard fought as the overall title race is the Over 50s competition where Rob Smith heads the way against drivers like Ted Pearson and Clive Richards.

The HSCCs Dunlop Saloon Car Cup has drawn an encouraging and varied field of cars. The Super Tourers should set the pace, topped by Stewart Whyte (Honda Accord) and local ace Mark Jones in his rapid Renault Laguna. For the GM marques are the Vauxhall Cavaliers of Darren Fielding and Tony Absolom and the Opel Vectra of German racer Steffan Irmler.

At least two Ford Sierra RS5000 Cosworths are due, headed by race winner Mark Wright while another local ace Paul Hogarth joins Mark Smith in BMW M3s. However, much of the attention will focus on Oulton expert Ric Wood in his latest creation, a fabulous Nissan Skyline R32 with twin turbos and four-wheel drive.

Kevin Kivlochan (AC Cobra) is steadily tightening his grip on the Road Sports Championship after an unbeaten run that started at Snetterton in round two. Kivlochan will be out to make it 10 out of 10 as he moves closer to the title.

However, it is not yet a done deal and a lack of class rivals in some races has stopped Kivlochan taking maximum scores. That will change with the arrival of possibly his biggest threat yet as Will Plant returns in his fathers Morgan Plus 8. The key title rivals come from the Lotus camp in the shape of Jonathan Rose (Lotus Elan) and Roger Lee (Lotus Seven), while Tony Davis (Austin Healey Sebring Sprite) and Ian Ross (Ginetta G15) are key players in the other classes.

The Gold Cup marks round 10 of the 70s Road Sports Championship which is now a straight contest between Adam Bagnall (Jaguar E-type) and Jeremy Clark (Lotus Elan). Bagnall is one of the few competitors who still drives his car to and from race meetings and that earns him extra points every time out.

Meanwhile, defending champion Clark is battling back into contention after missing the season opener at Donington due to a last minute oil leak. Key class rivals to Clark are father and son Mark and Will Leverett (Lotus Elan and Europa respectively). Meanwhile, former champion Charles Barter is hoping for a better weekend after a torrid time recently with his Datsun 240Z.

Heading the Guards Trophy points is Ross Hyett who is having a great season in his Lotus Elan. However, chasing hard in the GT section is the TVR Griffith of Mike Gardiner, which is likely to set the GT pace.

In the sports-racing division, it is nip-and-tuck between the Lotus 23s of Benn Tilley and father and son combo Michael and Andrew Hibberd. They will line-up against the Chevrons of Philip Nelson, Charles Allison and Chris Lillingston-Price as well as the Elva Mk7S of Nick Pancisi and local racer Peter de la Roche in another Lotus.

Sunday's programme includes a double-header for the FJHRA/HSCC Silverline Historic Formula Junior Championship. Andrew Taylor in his Cooper T56 currently heads the championship while Peter de la Roche (Lola Mk2) is well in contention despite a couple of non-scores.

In terms of overall pace, Robin Longdon (Lola Mk5a) will be right up there taking on a Lotus pack that includes Laine Martin and Andrew Hayden. In a competitive front-engined division, contenders include Alex Morton (Condor), Michael Hibberd (Lola Mk2) and Nick Taylor (Elva 100).

Multiple Historic Formula Ford 2000 champion Andrew Park has been the category benchmark for several seasons in his Reynard SF79 and has won four times in six starts to date.

Closest challenger to Park is the consistently quick Andrew Storer while Paul Allen and Jason Redding are presently level in third. Double winner at Anglesey was Ian Pearson, who pits his Royale RP30 against the Reynard hordes and is very capable of giving Park a tough time. The same can be said of Benn Simms, another former champion.

Simon Armer came good in the Historic Formula 3 Championship to win twice at Anglesey in his March 703 and, despite a non-finish in the second race at Croft, takes a 22-point lead to the Gold Cup. Closest challenger to Armer is Swede Leif Bosson in his Brabham BT28.

An influx of quick racers could influence the title contest, with welcome visitors Enrico Spaggiari (Lotus 41X), Christoph Widmer (Brabham BT18A) and Francois Derossi (Chevron B17) all having podium potential. However, Andrew Hibberd (Brabham BT18), Jason Timms (Brabham BT21B) and Peter Thompson (Brabham BT21) could be fastest of all.

Another strong field has been assembled for the combined races for the Classic Formula 3 Championship and URS Classic Formula Ford 2000 Series. In the Classic F3 pack Adrian Langridge in his fathers March 803 has a handy 32-point lead following two high-profile races at the Silverstone Classic.

No less than six Ralt RT3s will try and gang up on the March, headed by 2018 champion Gaius Ghinn, David Thorburn in the ex-Martin Brundle car and Paul Smith. However, due back after a lengthy rebuild is the three-time championship winning March 803B of Benn Simms. In the Formula Ford 2000 division, Ben Stiles is getting quicker and quicker but has Anthony Hancock and series leader Steve Collier as key rivals.

Monday is a busy day for contenders in the Historic Touring Car Championship with a qualifying session and two races in the space of seven hours for an excellent 25-car field.

Despite a dramatic weekend at Cadwell Park, when he bounced back from a first race accident, and missing last months Anglesey races, Bob Bullen tops the title race in his Ford Anglia. Fortunately, his leading rival Roger Stanford (Lotus Cortina) also forsook the trip to North Wales, so Bullen remains just three points ahead going to Oulton Park.

Richard Belcher in his Class B Lotus Cortina invariably sets the pace, but a lack of class rivals has seriously impeded his points score. Meanwhile, a gaggle of Ford Mustangs, Minis and Hillman Imps pack out this good-looking grid.

Sunday includes two rounds of the Classic Clubmans Championship, home to the incredibly rapid front-engined sports-racing cars. The man to beat is Mark Charteris in his Class A Mallock Mk20/21 and he now has one hand on retaining his title. His class opponents include Clive Wood and Alan Cook.

It could scarcely be closer in Class B for the Formula Ford 1600-engined cars, however, as one point splits three drivers with four rounds left to run. Barry Webb sits only one point behind Stephen Littler (Mallock Mk18B) and is level with Adam Paterson (Mallock Mk20/21).