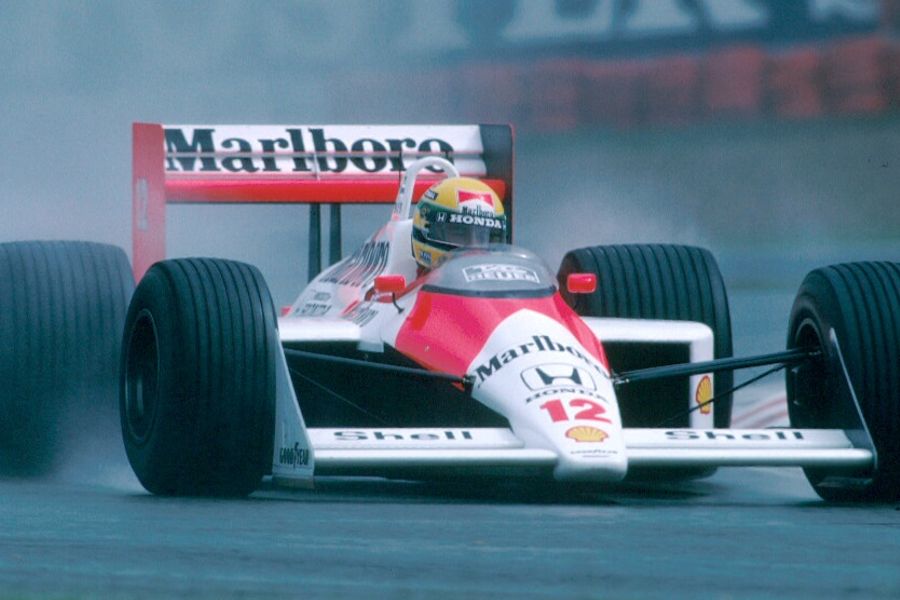 Triple Formula One World Champion Ayrton Senna was born this day in 1960, a hugely talented and emotionally complex driver who raced at a time when a number of ‘greats’ were at their peak and competition in Formula One was possibly at the highest level ever.

His rise to Formula One success followed the usual path of progression of the time, success in karting right up to World level – he was twice runner-up in the World Championship  - before moving to race in Europe, and in particular in Britain where the national single-seater championships were fiercely contested and attracted young drivers from across the world. A season in British Formula Ford 1600 saw him take the RAC and Townsend-Thoreson titles in his Van Diemen – and that was almost the end of his career.

His family wanted him to take up a role in the family business back in Brazil, and the young racer dutifully returned to his native county, but before he left the UK he had an offer to race in Formula Ford 2000 – the usually next step up at the time form FF1600 and an induction into racing single seaters with slicks and wings – and that was large in his thoughts. He ultimately elected to continue his race career, and also to change his name. Up to that point he had raced as Ayrton da Silva, but from then on, he chose to use his mother’s maiden name Senna.

His FF200 season saw him dominant, winning 21 times from 27 starts, and adding the British and European title to his growing list of championships. The logical next step was the British Formula Three Championship, for many years the national premier F3 series, and he joined West Surrey Racing, where after a season that particularly in later races saw him battling hard with Martin Brundle, he took that title too.

His Formula Three performances drew the attention of Formula One teams, and Senna tested for Williams and McLaren, before electing to make his Grand Prix debut with the Toleman team. His debut was in his home Brazilian Grand Prix in the opening race of the 1984 season, when the turbocharged Hart engine in the back of his TG 183B expired after just eight laps.

Senna scored points in his next two races, finishing sixth at Kyalami and Spa, but it was the sixth race of the season – the Monaco Grand Prix – that saw him really announce his arrival on the Formula One stage.

In a wet race Senna had forced his way through to second and was closing on Alain Prost’s McLaren, the Frenchman struggling to get heat into his brakes in the conditions. With Prost gesticulating to race officials every lap about the conditions, the race was halted after 31-laps and the result declared, a very controversial result.

Theories abounded that the clerk of the course, Jacky Ickx, had halted the race to ensure a Porsche engine car won (at the time he was driving for Porsche in sportscar racing), and he was indeed fined by the FIA for stopping the race without consulting the official stewards. However…sources within Toleman also said that Senna’s attacking style over the kerbs and some earlier contact in the race meant his rear suspension was on the point of collapse and unlikely to last more than a few laps more. Add to that the fact that in third place Stefan Bellof in the Tyrrell was closing on both cars ahead (although Tyrrell later had all their results for 1984 wiped from the record for technical infringements) and you have a race that has prompted debate for many years.

Senna backed up his Monaco promise with podiums in the British and Portuguese Grand Prix, but was aware that the Toleman was not a car to let him truly challenge at the front, and he engineered his way out of that contract and into a drive with Lotus.

That paid off right away, Senna winning the second race of the year at a wet Estoril, having also taken pole position and setting the race’s fastest lap. His race hopes were often blunted by the unreliability of the Lotus and its Renault V6 engine, 16-pole positions over his three seasons with the team only yielding six wins.

For 1988 he moved to McLaren to race their Honda-powered MP4/4, confident in his ability to not only match but outpace team-mate Alain Prost who already had two world titles to his name. The combination of the two star drivers and the MP4/4 proved dominant that year, only one Grand Prix not falling to the pair, with Senna winning eight races to Prost’s seven and taking his maiden World Championship.

Tensions between the pair came to the fore the next season, a clash at Suzuka’s chicane proving a key factor in Prost taking the title, the Frenchman with nothing to lose having already agreed a move to Ferrari.

Having felt unsupported by the FIA after the Suzuka incident, who he felt had favoured his French rival in their deliberations, Senna was not one to let a slight lie, leading to one of the less auspicious moments of his career.

At Suzuka in 1990 the title was again set to be a duel between Prost and Senna, the Brazilian holding an advantage in the points and Prost needing to score well to stay in the hunt. The two rivals were on the front row of the grid and at the first corner the McLaren went into the back of the Ferrari, both cars firing off into the gravel and out the race – giving the title to Senna.

While more than one track side observer was willing to confirm that Senna’s engine sounded like it was at full throttle even after the two cars had touched, as ever with the Brazilian, things were more complex than they appeared at first glance.

Prior to qualifying Senna had approached circuit officials to have pole position moved to the left-hand side of the circuit, the ‘clean’ side on the normal racing line, where he felt he could make a better getaway. After Senna took pole, autocratic FIA head Jean-Marie Balestre denied Senna’s request, putting Prost on the left of the circuit at the start, and in addition it was suggested that the pole-man crossing the circuit markings indicating the pit lane exit to gain a better line into the first corner would be frowned upon.

For most people, and for most race drivers in fact, none of that would be grounds for deliberately taking a rival out a race, and in fact Senna had started from pole position on the right-hand side of the circuit the two years previously. Senna felt he was fighting with not only Prost and Ferrari but the FIA as well, but in hindsight that does not justify his actions and for many that second World Championship was a tarnished victory.

He reminded the world what he could truly do the next season, becoming the youngest driver to that point to take three World Championships, and while the McLaren MP4/5 and its V10 Honda were not always the best package, Senna used it to great effect starting the 1991 season in style with four wins. He took seven wins in all, and could have won the penultimate race at Suzuka only to let team-mate Gerhard Berger past for the win once title rival Nigel Mansell was out the race and the title was his.

Williams were dominant over the next two years, Senna still managing to take three wins in each season including some mighty drives in 1993 when the McLaren had a Ford engine – his opening lap at the European Grand Prix at Donington Park having long passed into Formula One legend.

Ever the pragmatist, Senna knew he needed a Williams to win, and duly replaced Prost at the team for 1994. He was pushed hard by the vanguard of the new generation of drivers in the early races and the Williams FW16 was not as reliable as its predecessor, and heading into the third race of the season, the San Marino Grand Prix at Imola, Senna was yet to finish a race.

That he fatally crashed on lap seven at that fateful meeting is well known, but his legacy as one of the quickest and most competitive drivers in Formula One has long continued. In this brief overview we have not even had the opportunity to mention moments like his stunning qualifying at Monaco in 1988, his growth into a senior driver on the grid and the obligations he felt for the other driver’s safety-wise with that role – or his growing rivalry with young gun Michael Schumacher that included at least one physical confrontation.

If you have not seen it already, track down Alex Kapadia’s documentary, simply called ‘Senna’, for an insight into the Brazilian ace, and in particular his fractious relationship with authority and Balestre in particular.

On This Day Ayrton Senna McLaren

Sticker of the Day No.1: Saudia Williams Leyland, World Champions 1980

Sticker of the Day No.2: Vaillant-Porsche-Kremer-Racing Team

Sticker of the Day No.4: Jody Scheckter's Helmet