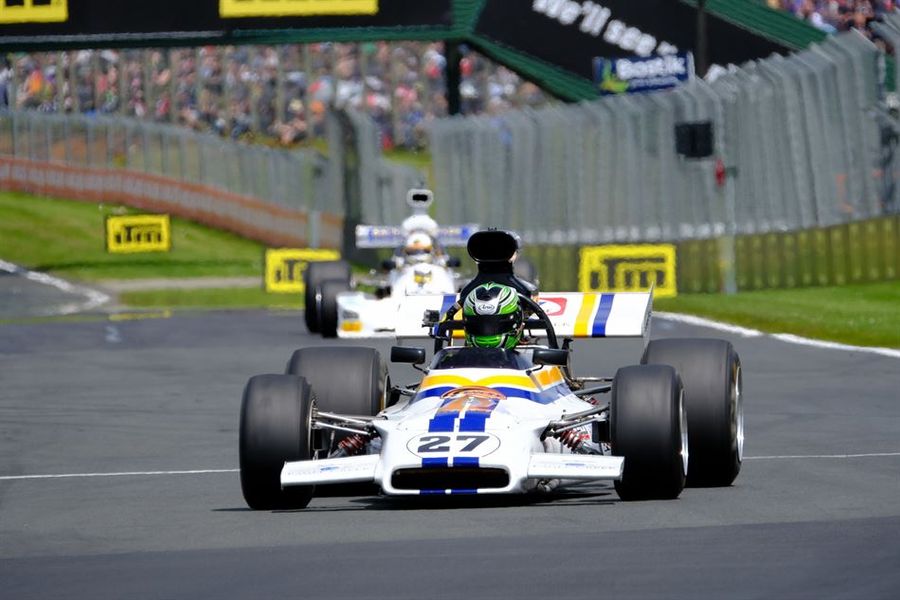 Photo: Fast Company/Jeff Ridder
There will be new look to the SAS Autoparts MSC NZ F5000 Tasman Cup Revival Series grid as the popular historic single-seater category heads to Manfeild this weekend for the second round of the 2017/18 series at the annual MG Classic meeting.
Series newcomer Michel Collins, driving the Alistair Hey-owned McRae GM1, made  a big impression in his debut drive in the series at the opening round at the big ITM SuperSprint Virgin Australia Supercars meeting at Pukekohe and the 21-year-old, three-time South Island Formula Ford class champion is expected to be just as smooth and fast at the second round.
“Michael was a pleasure to race with last weekend,” said series regular Clark Proctor (March 73A1) who spent both races swapping the lead back and forth with Collins. “To come into the class and do such a great job first up is not easy. But he did it and I will be watching with interest how he goes this weekend.”
Business commitments mean Proctor is not making the trip to Manfeild. Nor is fellow series regular Ken Smith. Smith had a wretched weekend at the opening series round, running a bearing in the engine of his own car in practice on Friday, then crashing heavily in Ian Riley’s similar Lola T332 when the rear wing stay broke on the front straight on the second lap of the first race on Sunday.
The 75-year-old now contesting his 60th consecutive season at a national level admitted to being ‘a bit sore’ after the accident (in which the out-of-control car also collected the Talon MR1 of Codie Banks with both cars severely damaged) but remains 100% committed to the SAS Autoparts MSC Series and says he will be back in his own car with rebuilt engine in the New Year.
Codie Banks, the son of series regular David Banks, was also quick to shake off any ill-effects of the accident in what was his debut in the SAS Autoparts MSC series. Both his father David, and Codie, have confirmed they will be running again this weekend, Banks Snr in his new ex Johnny Walker Lola T332, Codie in his Formula Ford in the Historic Formula Ford class.
Despite the absence of Proctor, Smith, Codie Banks and Ian Riley this weekend the SAS Autoparts MSC grid remains 14-strong with the addition of local F5000 class stalwart Tim Rush driving the Rush family-owned McLaren M22, and Lola drivers Russell Greer from Blenheim (Lola T332) and Shayne Windelburn from Auckland (Lola T400).
Returning to the series in a new car this season, too, is former class champion Andy Higgins, now driving the Stu Lush-owned Lola T332. Mix in fellow Aucklanders Grant Martin (Talon MR1A), Glen Richards (Lola T400) and father and son pair Peter (McRae GM1) and Aaron (Talon MR1A) Burson, as well as defending series title-holder Brett Willis (Lola T330) and series new-face Lyall Zohs (Chevron B32) both from Rotorua, and Class A (for older cars) front runners Tony Roberts now from Napier (McLaren M10A) and David Arrowsmith frim Christchurch (Lotus 70) and you have an excellent mix which guarantees the close and exciting V8 stock block historic single-seater racing the local series is known for.