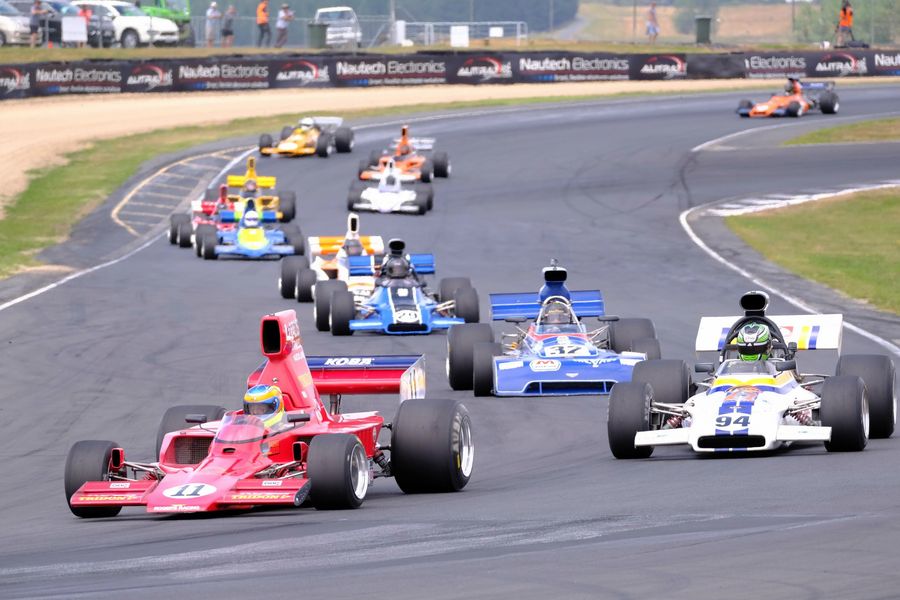 From humble – albeit solid in terms both of numbers of cars and the ambition of their owners to see them used as they were originally intended – beginnings, the series has grown to the point where it is the envy of F5000 category enthusiasts and historic single-seater event organisers the world over.

After trips in successive years to Australia – then last year – to the United States for the official US celebrations of the 50th anniversary of the category at the Laguna Seca circuit in Northern California, the coming summer season is the second in which the management committee has decided to keep dates and venues a little closer to home.

One of the main reasons is cost – because the majority of the series regulars pay all their own car, maintenance and travel bills and as Richards says, ‘it all adds up, particularly of you are away from your home base and/business for more than a week or two at a time.’

Another reason is that because they are now all over 40-years-old, the cars not only require regular maintenance, they also need the occasional major strip down and rebuild, something which can be accomplished between summer seasons but not when they have to be packed up and shipped overseas during the traditional winter ‘off-season’ here.

As it is the demand from race meeting organisers here is stronger than ever, with five rounds between November this year and March already sorted and a sixth – in April next year – a distinct possibility.

The 2019/20 season starts with the category’s biennial return to the MG Classic meeting at Circuit Chris Amon – Manfeild in November this year, then after a break over the Christmas/New Year period, heads north to Taupo’s Bruce McLaren Motorsport Park for the now annual Historic Grand Prix meeting in late January then south to Mike Pero Motorsport Park in Christchurch for the always popular Skope Classic meeting in early February.

A fortnight after that the category and series makes a long-awaited return to Invercargill’s Teretonga Park for an appearance at the revamped Classic Speedfest at Teretonga Park, before returning to the North Island for one – or at the most – two more meetings.

“With no big classic meeting planned at Hampton Down in January,” says Richards. “we’ve again accepted an invite to run at the HRC’s big Legends of Speed meeting there in March. That makes five meetings which will be enough to make an interesting series, though we are still negotiating for a sixth round at another circuit in April, but I probably won’t be able to confirm that either way until the New Year.”

Like a number of cars imported by enthusiast owners like Richards the Lola, T400 HU9, he has now owned for nine years was never a famous race or series winner, but – despite only being raced in period 14 times - has a fascinating back story.

It’s first owner was  Dutch-born Canadian Egbert (Eppie) Wietzes who contested 10 races in it in 1975 and one in 1976 before relegating it to show car status for sponsor, Canadian Tire, then finally selling it in 1985 to another recent European immigrant (from East Germany this time) Horst Kroll.

Kroll followed the then popular path of converting the car to full-body ‘Can-Am’ spec to contest the revived Canadian-American sports car series but does not appear to have raced it himself. Instead it was driven by other Canadians, including Bill Adam, future Champ Car and IndyCar star Paul Tracy, and Jacques Villeneuve Snr, brother of the late Gilles, and uncle of namesake and Indianapolis 500 winner and 1997 Formula 1 world champion Jacques Villeneuve.

Like most of the current owner/drivers who are the backbone of the SAS Autoparts MSC series Richards remembers the impact the raw, V8-powered slicks-and-wings single seater racing cars had on him when he would go to rounds of the Tasman motor racing series in his early teenaged years, vowing that ‘one day’ – if he ever had the wherewithal – he would own and race one of his own.

That time did come - in 2010 – and after a global search for a car he could call ‘his’ Richards found HU9, still in Kroll’s ownership, in Canada. A deal was done, the car shipped here and a rebuild back to race-ready order was started by Richards’ Clevedon neighbour, NZ motor racing identity, Reg Cook.

Because it was not only his first F5000, but also his first single-seater race car period, Richards also asked Cook – who had raced an earlier model Lola T300 in period – to do the Lion’s share of the driving for the first season and mentor him through the myriad set-up and race craft issues he was sure he would face.

Since 2013, however Richards has contested every SAS Autopart MSC series to date and now says that he wonders why it took him so long to get behind the wheel:

“While they’re not what anyone could call easy to drive, or to set-up, run and keep on top of in terms of maintenance, the feeling of satisfaction you get when you string a half decent lap or even better a race, together makes it totally worthwhile. I’m hooked, and can see myself racing ‘Eppie’s car’ for many more years to come.”

There will also be interest in how the man behind series’ sponsor SAS Autoparts, David Banks, goes in his now completely rebuilt and re-liveried (in the 1975 Interstate colours of original driver Jon Woodner) Talon MR1.