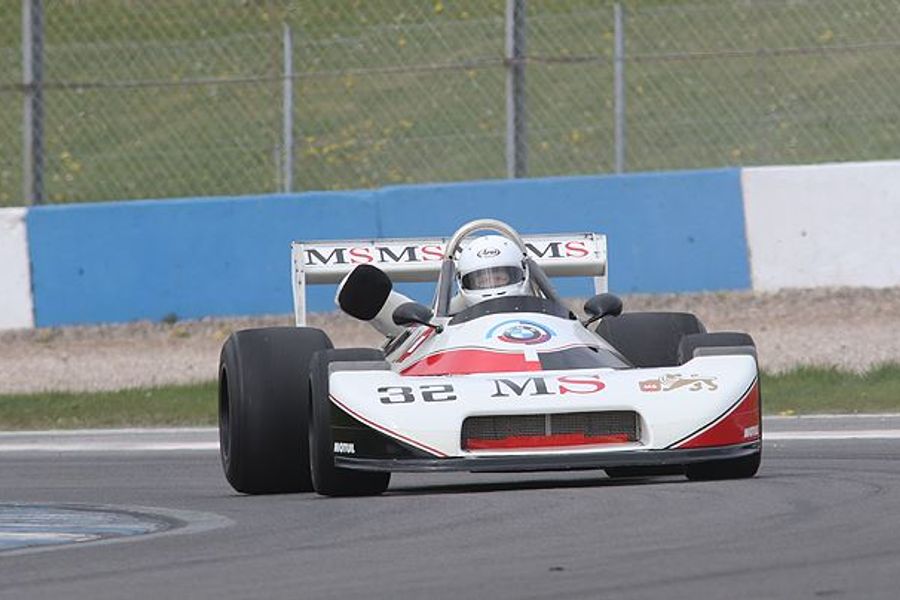 Picture: Steve Seaman’s ex-Eddie Cheever Ralt RT1 (Paul Lawrence)
A superb field of 26-cars will contest the opening two races in the HSCC Historic Formula 2 FIA-sanctioned International Series at the high-profile Donington Historic Festival this weekend (28th-30th April).
Drivers from across Europe as well as a strong UK-contingent will get the Historic Formula 2 season off to a great start as Donington Park celebrates 40 years since the track re-opened in May 1977. At the end of October that year, Donington hosted the 13th and final round of the European Formula 2 Championship when Bruno Giacomelli won in his works March 782 with a clear victory over the Chevron B40 of Keke Rosberg.
Pre-race favourite for this weekend is prolific F2 winner Richard Evans in his March 742, but he faces plenty of rivals in the Bruno Giacomelli Trophy Class C for 2-litre F2 cars from up to 1978. Notable are the cars of Jamie Brashaw (Chevron B25), Frazer Gibney (March 782) and series newcomer Daniel Gibson in the ex-Hugh Price Chevron B42. Rapid Ralt RT1s are handled by Dan Daly, Steve Seaman and Matthew Wrigley, while more series newcomers include John Lord in another Ralt RT1, Chris Willie (Chevron B29) and Julian Maynard in his March 742.
Packing out the 2-litre class in the ex-works Surtees TS15 of Jeremy Wheatley, the Chevron B29 of Gwyn Pollard, who steps up from the Formula Atlantic class, Mike Bletsoe-Brown (Chevron B27) and Richard Ellingworth (March 782).
The Jochen Rindt Trophy Class A for 1600cc F2 cars from 1967 to 1971 has a typically strong field including reigning four-time champion Robert Simac (March 712M). His rivals include Luciano Arnold (Brabham BT36), Alain Lagache (March 712M) and Klaus Bergs (Brabham BT36) as well as Australian commuter Martin Bullock in his 1970 Chevron B17C, local racer Paul Bason (March 712) and Lincoln Small in the ex-Derek Bell Brabham BT30. Another F2 newcomer in this class is Julian Stokes in his Tecno.
Contenders in Class B for 1600cc Formula B and Formula Atlantic cars will contest the Gilles Villeneuve Trophy and the leading cars are the March 79B of seasoned racer Mike Wrigley, the March 722 of Frenchman Olivier Huez and Formula Ford expert Peter Alexander in the ex-Wheatcroft Racing Chevron B29 of Chris Sharples.
Finally, in the Jim Clark Trophy Class D for the early non-winged F2, Formula B and Formula Atlantic cars will be the rare Elfin 600B of Stephen Weller.
The Formula 2 cars have prime slot within the timetable for the Donington Historic Festival. After qualifying at 2.25pm on Friday, the races will start at 12.10pm on Saturday and 2.35pm on Sunday.
The Historic Formula 2 International Series is open to single-seater racing cars built to the appropriate Formula 2, Formula B and Formula Atlantic regulations between 1st January 1967 and 31st December 1978, running to their original specification and using components of a type used in period.