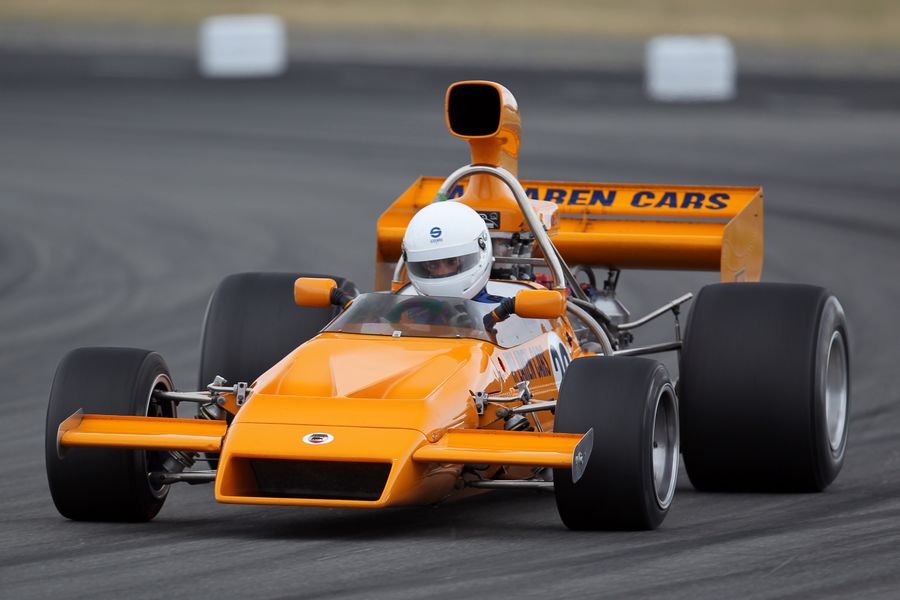 Local fans of New Zealand’s SAS Autoparts MSC NZ F5000 Tasman Cup Revival Series have two of their own to cheer on at the opening round of the 2019/20 series at Feilding’s Circuit Chris Amon Manfeild this weekend.

One – Tim Rush – is a series regular who drives one of the rarest cars in the field, a 1972 McLaren M22 (pictured above). The other is a more recent arrival, Kevin Ingram, who made his series’ debut last season behind the wheel of the ex-Ian Clements’ Lola T332. The Rush McLaren (M22-3-72) enjoys the distinction of being both the last McLaren built by the company’s early production partner Trojan, and the last McLaren customer car to be built.

Though it was the earlier McLaren M10A and M10B models (on which the M22 was based) which will be more familiar to SAS Autoparts series’ fans today, top British driver at the time, David Hobbs, used the 1972 Tasman Series to race-test the prototype M22.

In his first race in the car, in early January, he finished third behind race winner Frank Gardner in the works Lola T300, and motorcycle champion-turned-racing driver Mike Hailwood in his works Surtees TS8A, in the New Zealand Grand Prix at Pukekohe. Then six weeks later he again finished third, this time in the Australian Grand Prix at Sandown in Melbourne, behind series’ champion-elect Graham McRae (Leda GM1) who won the race, and then UK-based Aussie Gardner who was second.

Hobbs also won the series-ending final race at the then all-new Adelaide International Raceway in South Australia, the prototype McLaren’s reliability trumping the greater speed of pole-setter Frank Matich, in his Repco-engined Matich A50, and Graham McRae in his Leda GM1.

The Tim Rush car was originally bought from Trojan by Texan amateur racer Tom C. Jones in 1972 for use in US events series in 1973. Jones in turn sold it to another keen amateur driver, Vic Topia, who raced it in the L&M F5000 series as well as in other SCCA series races.

The car spent many of its subsequent years in a collection of McLaren racing cars in the US before being acquired by SAS Autoparts MSC NZ series regular Tony Roberts and shipped back to New Zealand where it was stripped, rebuilt and returned to track-ready condition by Auckland-based McLaren restorer Duncan Fox. Roberts raced it for a couple of seasons here before on-selling it to the Rush family for Tim to drive in the SAS Autoparts MSC series during the season and display in their private museum when not in active use.

Less is known, surprisingly given the large number of similar models sold, about the Lola T332 of fellow Feilding resident Kevin Ingram. According to the oldracingcars.com website (widely regarded as THE source of accurate information on the provenance of historic racing cars) the Ingram T332 is based on a Frissbee Can-Am car acquired by Clements from the US in 2007. 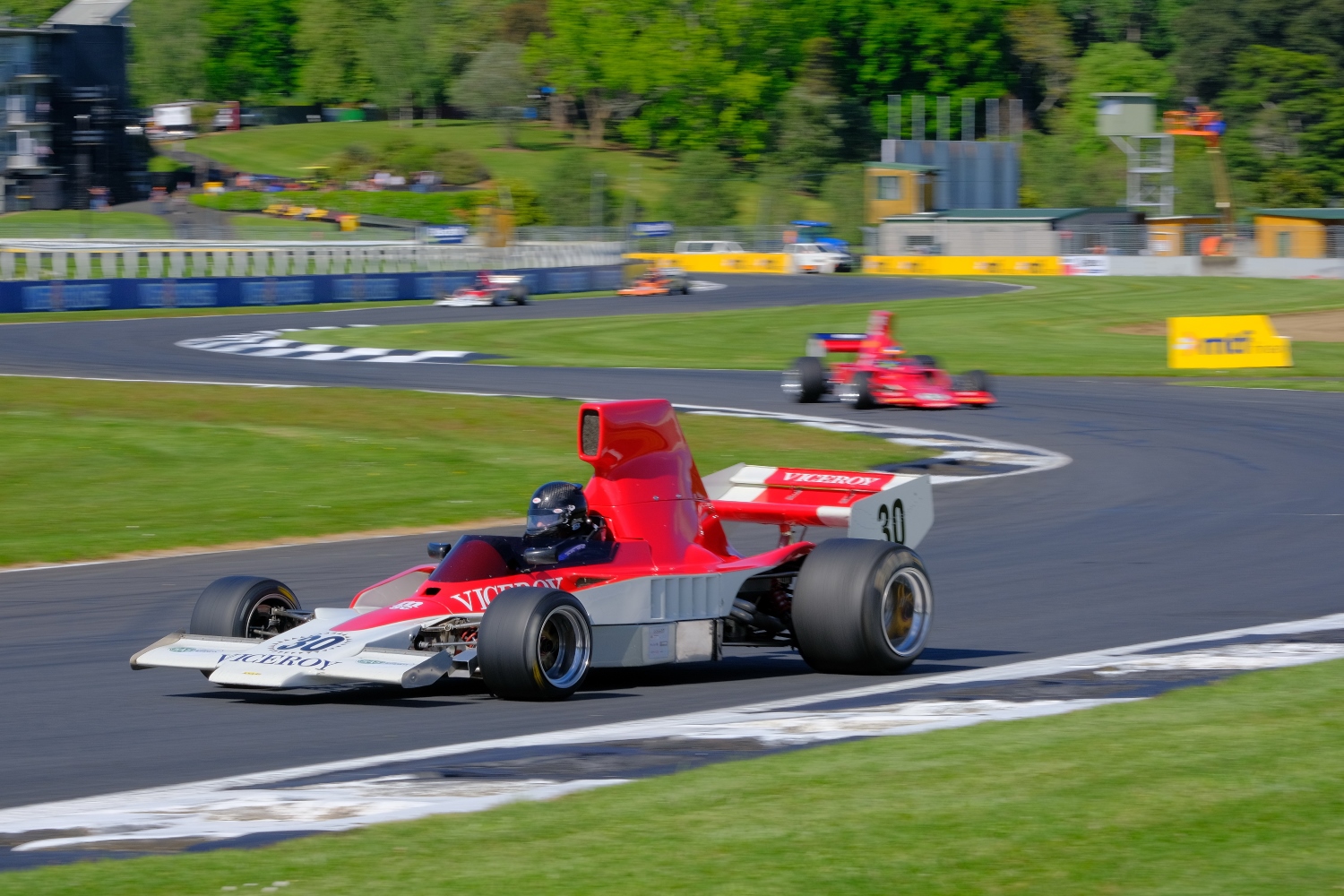 Frissbees were full-bodied sportscar-style racing cars built on donor F5000 chassis for the revived Can-Am series which ran (using F5000 cars as a base) between 1977 and 1987.

Shortly after its arrival here Clements had the car stripped of its Frissbee bodywork and returned to original F5000 category spec by Christchurch-based category specialists Motorsport Solutions NZ Ltd. He then raced it in Australia and here in New Zealand for the next eight seasons before selling it to Ingram in 2018.

Few contemporary fans of the category were aware of Ingram’s own competition CV when he turned up at his first SAS Autoparts MSC NZ F5000 Tasman Cup Revival Series round last season. Even now not that many know that before he hung up his crash helmet the first time he had won the New Zealand Formula Ford championship (in 1983) in a car – a Keram – he literally built and engineered himself.

Those who are aware of his ability – both behind the wheel and the spanners – are in no doubt that Ingram has what it takes to run at the front of the SAS Autoparts MSC field. However as he told local motoring writer Richard Bosselman last month he might as well have started from scratch.

“I’ve never driven anything so fast before and I haven’t driven competitively for 25 years. I’ve learned this car is easy to drive, just not always easy to drive flat out. You arrive at corners very quickly, so stopping it is one issue. The other is with accelerating out. I’m still cautious because I’m still coming to terms with how much power I can exactly use (before it loses traction).”

Because the SAS Autoparts MSC series only has a round at the annual The Sound MG Classic meeting at the Manfeild circuit every two years, this weekend will be the first time Ingram has had a chance to actually race the car on his ‘home’ circuit, something he is understandably looking forward to.

That said, the circuit’s association with the class is well-cemented. The very first international at the venue, back in 1974, was a F5000 event. While the link with the MG Classic is almost as enduring – this year’s is the 34th at the venue.

The SAS Autoparts MSC series cars are always amongst the favourites with the large crowds that have traditionally been drawn to the meeting. This year should be no different with local aces Rush and Ingram being joined by a full grid of series regulars.

Heading the pack – and back for his 62nd consecutive season competing at a national level here in New Zealand, is 78-year-old living legend Ken Smith (Lola T332). Smith claimed a record fifth SAS Autoparts MSC series title last season and is back to defend it this season.

Set to again take the battle to Smith is series’ young gun, Michael Collins from Christchurch in his family-owned Motorsport Solutions-rebuilt and run McRae GM1. Former series title-holder Brett Willis (Lola T330) from Rotorua is also back and rearing to go, as are Aaron Burson (McRae GM1), Shayne Windelburn and Glenn Richards (both Lola T400s), Grant Martin (Talon MR1/A) and father and son David and Codie Banks, all from Auckland.

This weekend sees something of a changing of the guards for the Banks, with David – the man behind SAS Autoparts – handing over his Lola T332, and returning to the car he originally got his start in the series in, the Talon MR1 which Codie made his series debut in two years ago.

No round of the SAS Autoparts MSC series would be complete without at least one of the category’s original Class A cars, either, and this weekend’s opening 2019/20 series round is no exception. Two beautifully rebuilt McLarens will be in the grid this weekend, the ‘high-wing’ McLaren M10A of series original Tony Roberts, now from Napier, and the ‘low-wing’ McLaren M10B of Aucklander Frank Karl.