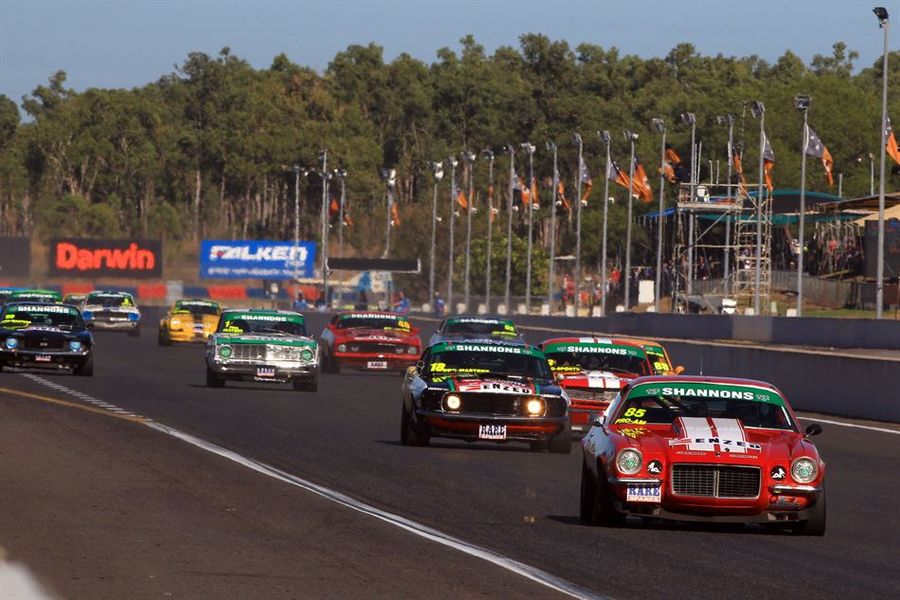 Darwin has been a very happy hunting ground for the ENZED Touring Car Masters since the series’ first visited the venue in 2008. The long straight plays to the cars with plenty of ponies under the bonnet, but the technical, flowing nature of the remainder of the lap allows the smaller capacity, lighter cars to stay right in the game. Over the years there has been some giant-killing performances at the venue: notably Michael Almond qualifying a 350hp Porsche third in 2013, and Cameron Mason storming his five-litre Mustang to the front of the pack last year.

And yet there’s no substitute for cubic inches in Darwin – which is why Brad Tilley’s enormous GTHO Falcon always seems to go well in the top end.

The talk of the TCM world heading into Darwin is the re-uniting of the Johnson – Bowe racing ‘family’ this weekend – but there’s another family that will do battle on track this weekend. The Mason clan, from the NSW Central Coast, will have plenty to cheer for as Steve Mason re-joins son Cameron on the TCM Grid. Mason Sr, the 2007 Touring Car Masters series champion, will race his 1969 Chevrolet Camaro against son Cameron’s ’66 Ford Shelby Mustang this weekend.

Cam Mason was the undoubted star of the 2014 Hidden Valley round as he qualified seventh and stormed to fifth in the first race. He then was challenging for the race lead in the second race, battling with Mark King and Adam Bressington for the lead before running wide at turn one as he attempted to overtake – ultimately finishing eighth.

Steve Mason has a strong record in the top end: he qualified fifth there in 2008 and fourth in 2011 and has a best finish of fourth at the venue, scored in the final race of the 2008 round.

The Longest running streak of pole positions in ENZED TCM history ended at the series’ most recent round at Winton – sort of. Mustang ‘Sally’, driven by John Bowe and Steven Johnson, had dominated qualifying for the last two years with John Bowe scoring nine consecutive pole positions between the Phillip Island, 2013 grand finale’ and Round two in Tasmania this year.

Though Bowe missed Symmons Plains, his replacement – V8 ace Steven Johnson – carried on his form and put the No. 18 Mustang on the top spot. With ‘Sally’ sitting out Winton, the streak came to an end though it was a familiar face at the top of the grid: John Bowe instead driving a Holden Torana to the top spot for the first time in TCM history.

So perhaps the stat should now read ‘John Bowe or John Bowe’s car hasn’t been beaten for pole since 2013..’

With Steven Johnson back in the Mustang this weekend, and a one-for-one record in qualifying, there’s every chance it will continue in Darwin – especially given Bowe has been on pole in Darwin for the last five straight years. For the record, the last person to be on pole position not driving Mustang Sally or not named John Bowe was another Ford Legend: Glenn Seton took pole for the Bathurst round in 2013 driving an XY GTHO Ford Falcon.

Entering the half-way point of the season this weekend, the ENZED Touring Car Masters title fight is wide open and has the potential to be the most competitive yet. With 180 points up for grabs this weekend, the top eight drivers are covered by just 145 points heading into the fourth of eight rounds.

Consistency has seen Gavin Bullas jump to the top following Winton’s most recent round – he holds a narrow 12-point lead over the similarly consistent Greg Crick.

The first driver in the standings to have won a round this year is Andrew Miedecke, who’s Clipsal 500 victory sees him just two markers further back in third. There have been three winners from three rounds to date, Miedecke, Johnson and Bowe having shared the outright / ProMaster class honours so far. Just 68 points – little more than one race victory – cover first placed Bullas to sixth placed Mark King, with Crick, Miedecke, Jim Richards and Glenn Seton in between.

In the ProAm class Cameron Tilley holds a narrow 42-point lead over Brett Youlden, while Leo Tobin has a strong lead in the ProSports class.