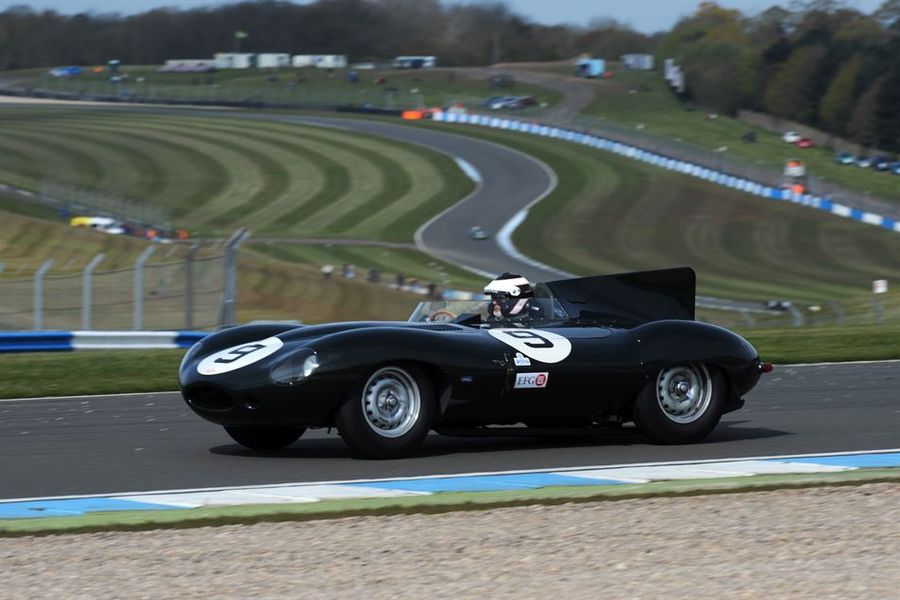 Motor Racing legends start their 2018 season at this weekend’s Donington Historic Festival (4th-6th May) with some impressive grid line-ups.

Historic Touring Car Challenge taking in the Tony Dron Trophy
The HTCC and Tony Dron Trophy will kick start the year, with qualifying at 10.20am on Friday morning.  Highlights of the grid include the return of Chris Ward and Steve Soper in the Rover Bastos Vitesse in what is sure to be another superb battle alongside Andrew Strachan and James Hanson in a 3.5 litre Rover SD1.

Ric Wood will co-drive a Ford Capri with current BTCC star Adam Morgan in the  Group 2 over 2.5 litre class, and they’ll be taking on regular Motor Racing Legends podium visitors Patrick Blakeney-Edwards and Frederic Wakeman out for the first time in Fred’s newly-acquired Rover SD1. (The duo now have a car for every one of MRL’s race series!)

BMWs feature heavily on the HTCC grid this weekend, with six BMW M3s entered in the hands of Mark Smith, Paul Hogarth, Tom Andrew and Steve Jones all driving solo - alongside father and son pairings Nick and Harry Whale and Roger and Jack Stanford all of which should make for a great race.

Four BMW 635 CSis join the grid, including the debut race for an original BMW 635 CSi team car driven by Nick Padmore, a car that previously raced at the Donington 500 in 1983.

In the Tony Dron Trophy, the Clarke family will be busy swapping Dolomites at half time, as Ken and son Tim attempt to drive two cars for the entire race.

Royal Automobile Club Woodcote Trophy
The Royal Automobile Club Woodcote Trophy supported by EFG Private Banking will be next up on Friday with qualifying at 12.15pm.This year will feature five Jaguar D-Types leading the field, which should be an impressive sight. Carlos Monteverde co-drives with Gary Pearson. who is also co-driving with brother John in the family owned car. Ben Eastick will be joined by Karl Jones, Rod Barrett drives with Jay Shepherd and Steve Brooks brings out his Jaguar D-type for its debut race after a long restoration at home. Mixing it with the D-types will be the rapid Cooper T38 of Frederic Wakeman and Patrick Blakeney-Edwards.
In the under 2000 Litre with drum brakes class, sit the highly competitive and wonderful cycle-winged Cooper Bristol T24/T25 and Frazer Nash Le Mans models with familiar faces at the wheel: current Woodcote Trophy title-holders John Ure and Nick Wigley (in the Cooper), and Martyn Corfield and Eddie Williams in the Frazer Nash. This year, a Ferrari 500 TRC joins the class entered by David and James Cottingham and Kevin Kivlochan brings an AC Ace Bristol to the line-up.
Further down the grid, no less than eight Austin-Healey 100s will be jostling for position in the under 3 litre disc braked class, but they will all need to dig deep to find a way past the serial class winner - the Lotus Mk X of Rick Bourne and Malcolm Paul!

‘Mad-Jack’ Pre-War Sports Cars
The ‘Mad Jack’ race for Pre-War sports cars qualifies at 15.10pm, when you can of course expect to see a full compliment of Bentley racers, the Morley family (James, Clive and Stuart) spread themselves across three Bentley 3/41Ž2s with Stuart co-driving with Richard Hudson. Guy Northam completes the big Bentley line-up in his 41Ž2. In the Vintage under 3000cc class we are delighted to see Andrew and Richard Frankel driving together in the Bentley TT, the oldest car at the meeting, and Jock Mackinnon racing against MRL chief Duncan Wiltshire in their 3 Litre Bentleys.
Whilst in the Vintage under 1500cc class -Frazer Nash SuperSports rule the chain-driven roost. Fred Wakeman and Patrick Blakeney-Edwards have winning form here, and they are joined by Charles Gillett, co-driving with Eddie Williams. And Philip Champion drives solo to complete the Supersports line-up. Chris Chilcott brings a SuperTourer to the class and Sue Darbyshire adds a Mogan Super Aero three –wheeler.  All of which should make for a great battle.
Other grid highlights, include the Aston Martin Speed ‘Red Dragon’ driven by Alan Middleton joined in the under 2001cc Post Vintage class by the Alta Sport of Gareth Burnett – having just returned from winning the Flying Scotsman rally and the Maserati 8C 3000 driven by Rebeca Rettenmaier from Germany (Invitation class) should also be pretty spectacular.

Stirling Moss Trophy
The Stirling Moss Trophy completes the day’s qualifying on Friday at 16.45pm.
We are expecting a serious battle of the Lister Knobblies with Chris Ward driving solo in the JD Classics Knobbly, Jon Minshaw drives with Phil Keen, and Tony Woods with Will Nuthall. The Lister Chevrolet of Marc Gibbon joins the battle driven by James Cottingham and Andrew R Smith.
The under 2000cc disc braked class should be another exciting battle, with five Cooper Monacos all looking for a class award, but they will all have to look out for the Lotus 15 of Oliver and Grahame Bryant always a highly competitive entry.
Six Lotus XIs make up the under 1500cc disc braked class, with drivers coming from far and wide to join us: Guy Peeters (Belgium) driving solo, Andrea Stortoni (Italy) drives with Brit Richard Postins, and Harindra and Timothy de Silva come all the way from the USA. Just the Rejo Mk IV of Gregory De Prins (Belgium) joins this Lotus dominated line-up.
In the smaller engined classes, three Lola Mk1s compete in the under 2000cc drum braked class: Marc Valvekens, (Belgium) and Jürg Tobler (Swiss) drive solo, alongside Keith Ahlers and Billy Bellinger in the shiny paint-free Mk1 Prototype.  And finally don’t forget to look out for the always smiling duo Patrick Watts and Malcolm Harrison in the under 1100cc class sharing the drive in Malcolm’s 1958 Rejo Mk3.