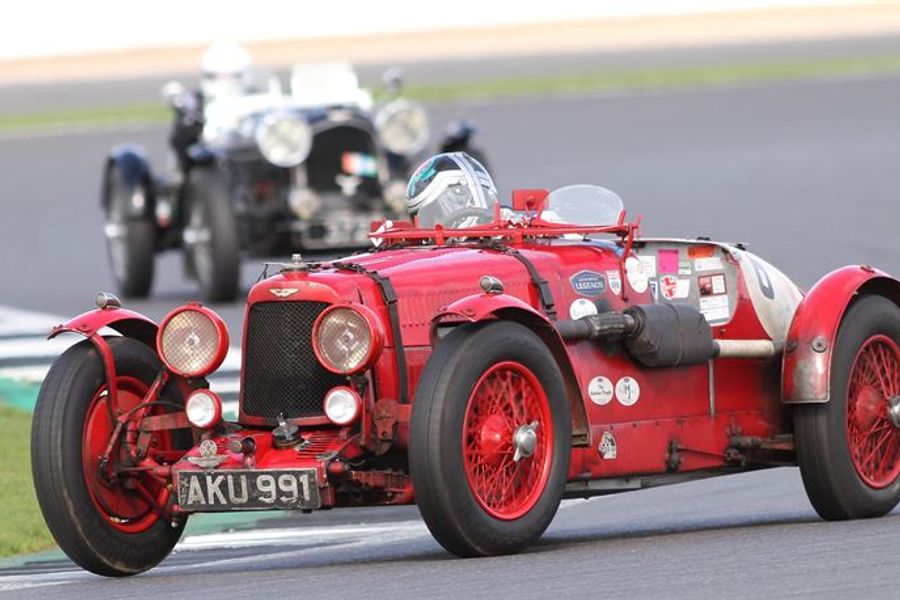 Photo: Peter French
A popular feature of AMOC Racing’s meetings is the Pre-War Team Challenge, which are run as handicap events and attract a host of classic cars – and at Silverstone last week also a successful current driver in Richard Bradley, out in an Aston Martin Ulster just a week after winning the European Le Mans Series race at Spa-Francorchamps in an LMP2 ORECA-Gibson.
A former LMP2 category winner at Le Mans, Richard continued that theme with a win in the Silverstone race, and we caught up with him after qualifying at the circuit to talk about his love for historic racing, and just how different it is to go quick in the Aston Martin.
“I’m racing a 1935 Aston Martin Ulster today, very much a contrast with the prototype I was racing at Spa last weekend but at the end of the day it has four wheels, a steering wheel, and you just drive it as fast as you can. I much prefer a car like this, if something goes wrong with the prototype here isn’t much you can do about it as a driver, it isn’t actually that skilful when you press a see a red light and press a button to change gear.
“The Aston has no syncromesh, and the throttle is the middle pedal, so you have to double de-clutch on the up-shifts, and when you are braking, with the middle peddle and the size of my feet I have to go flat out, put my right foot on the right pedal (the brake) my left foot on the clutch, put it into neutral, then take my right foot off the brake halfway through the braking zone and accelerate as hard to get as many revs as I can, then drop the clutch and use it as engine braking. To be honest, these car cable operated drum brakes so coming off them in the braking zone doesn’t do much as they are pretty ineffective anyway!
“In a prototype you just hold on and the computers take care of everything for you, but in the Aston Martin you are an integral part of everything that is happening.  Your every action has a direct effect on what is happening, we have leaf springs on the car so the more you lean over, the more grip you have, just like a motorbike, and I love it!
“I have never done a handicap race before, but this is my fourth time out in this car and it is going well, we were on pole at Snetterton a few weeks ago but had a problem in the race. I feel that racing this keeps me sharp for my other racing, you are so involved in racing this car that you have to be technically aware of what is going on, and you have to have a lot of feeling for what is going on.
“I’d love to take this car round Spa, I think Eau Rouge would be flat, though with leaf springs I would avoid some of the kerbs! Pre-War racing seems to be getting more popular, we had 45-cars out at the Silverstone Classic, and my dad and I are looking to do more races on the Continent next year.
“I’d love to see a pre-war endure, a six-hours or something. These cars were designed to do long races, there were 20 Aston Martin Ulsters built and the factory had a team at Le Mans, in their time they were the equivalent of the GT Pro cars we have today. They look like old cars, but they were the prototypes of their time, and yes, they slide round corners but that is what they were designed to do – they slide perfectly, I can slide the Aston Martin much more easily than an LMP2!
“I try to drive the Aston whenever I can, I love driving it and fortunately my dad doesn’t mind me using it when I am around instead of him. I love historic racing, we have just bought a Brabham BT2 in the United States and we are going to leave that over there next year to go and race at places like Watkins Glen, Road Atlanta etc., there are loads of races, we may even be out at COTA this November. Then we will ship the car over here in time for the Silverstone Classic.”