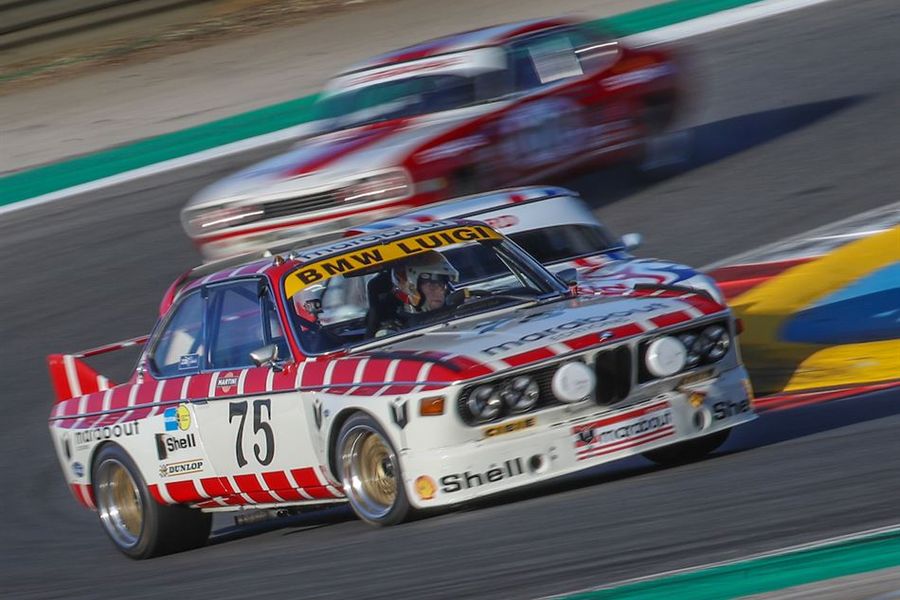 The Algarve Classic Festival last weekend wrapped up the 2017 season for Motor Racing Legends and the event was a huge success not least because the sun shone throughout the weekend, the racing was superb, and the social side - as always - was a lot of fun.
In the inaugural two-hour Historic Touring Car Challenge, it was the Belgium crewed BMW 3.0 CSL who stole top step honours finishing a clear minute ahead of the JD Classics Bastos Rover. No one could match the pace of Eric Mestdagh and Pierre-Alain Thibaut (who co-incidently drove a Bastos Rover with Steve Soper in his heyday!).  Chris Ward and Steve Soper had to settle for second despite taking the lead just after the start of the race. The Ford Capri solo-piloted by Steve Dance drove superbly for the whole two hours, consistently keeping up with the lead pack to finish third. Greg Caton’s newly-completed Ford Escort finished in fourth with the Ford Capri of James Hanson and Paul Pochciol completing the top five.
As you can expect, lots of drama unfolded throughout the two-hours, the front-running Ford Capri of Ric Wood and Adam Morgan was forced to retire due to the throttle cable sticking open half way through the race, but not before several attempts to fix it and some scary laps along the way. The MG Metro Turbo of Till Bechtolscheimer and Damien Faulkner broke a rear shock absorber and rejoined to finish ninth overall. The Ford Capri of John Spiers and Graham Pattle had to retire due to clutch failure, and the Ford Escort Zakspeed of Malcolm Harding and Tony Paxman parked up after they ran out of brakes.
First home for the Tony Dron Trophy competitors was the Golf GTi of Jim Morris and Tom Shephard finishing eighth overall. A pair of Ford Capris were chasing them down; finishing next on the road but a lap behind were George Pochciol and Jason Minshaw in second and the Capri of Paul Chase-Gardener and Simon Jones in third.
In Saturday’s 50s Sports Car race it was the JD Classics Lister Costin driven by Chris Ward and John Young who were first to the flag. But problems for the Lister started early when they couldn't get maximum revs, and it was the stunning Tojeiro Jaguar of James Cottingham and Andrew Smith who led for much of the race. A late safety car closing up the field and a fuel supply issue for co-driver Smith saw him take to the grass on the pit straight just as Chris Ward was closing in on the final laps, allowing both Ward and the little Lola Mk1 of Keith Ahlers and Billy Bellinger to nip through and steal the top two steps of the podium in the closing laps, relegating the Tojeiro to third.
This year's race was a true test for man and machine as we witnessed some fast engineering genius as the dramas unfolded. The Jaguar D-Type of Chris and Nick Ball was forced to start from the pit lane after having to pump out fuel due to water contamination. Ralf Emmerling was straight in after the warm-up lap due to overheating issues. The JD Classics crew did plug changes, coil, condenser and more to try and cure their lack of revs during the pit stops and the Cooper Monaco crew of Justin Maeers and Charlie Martin rebuilt the top end of their gearbox during the race after losing all gears.
Fourth home was the Willment Climax of Steve Smith and Charles Gillett, and fifth was Fred Wakeman and Patrick Blakeney-Edwards in the T38 Cooper. Sixth place was a fantastic come back for the Jaguar D-Type of Chris and Nick Ball, after starting dead last from the pit lane.