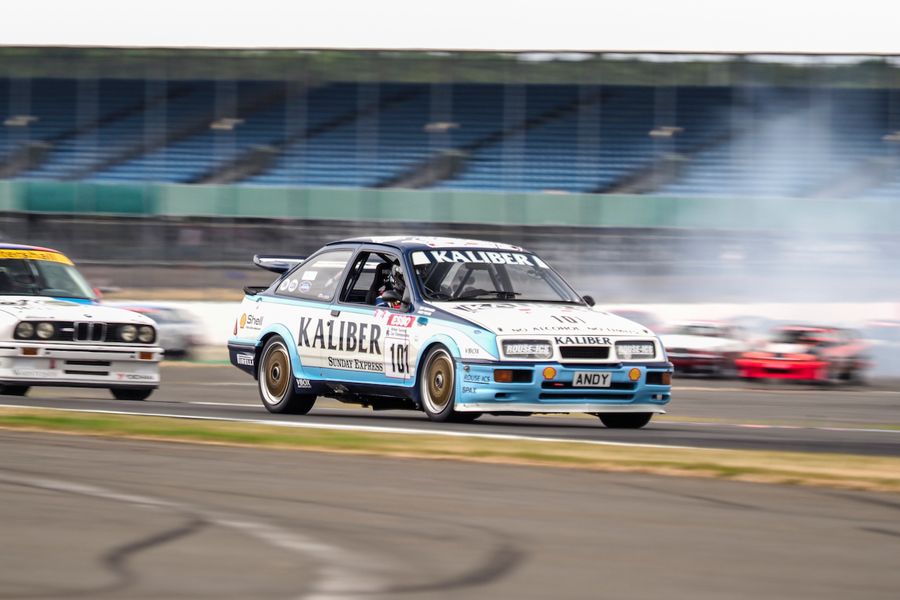 With the mighty Silverstone Classic at the end of this week (July 26th-28th), we look at the races on the bill organised by Motor Racing Legends where multiple celebrations have resulted in a fabulous entry line-up across four packed grids.

Amongst the feature races of the three-day event they are responsible for a number of key grids:

The combined grid of the Stirling Moss Trophy and Royal Automobile Club Woodcote Trophy (for pre 61 sports racers and pre 56 sports cars) enjoys a fantastic entry list, one of the most valuable grids of the weekend.

In last year’s Stirling Moss Trophy, we witnessed a superb battle between the Lotus 15 of Roger Wills and Chris Ward’s Lister Knobbly. It was Ward who took the honours in the end. In this year’s race the Lister vs Lotus battle continues: four Lotus 15s join the grid, including the striking orange and white car of Philip Walker and Miles Griffiths. US driver Michael Gans - who finished fourth overall last year, Bernardo Hartogs sharing with Will Nuthall and another regular podium visitor, Olly Bryant, drives solo.

In the Lister corner, are Knobbly entries from Gary Pearson, Tony Wood driving with Will Nuthall, and Peter Ratcliff driving with Luke Stevens. Costin-bodied Lister entries are Dutchman David Hart driving solo, and Richard Kent sharing with Joe Osbourne. This Stirling Moss race-leading pack are joined by the Cooper Jaguar T38 of Fred Wakeman and Patrick Blakeney-Edwards who have recently installed a 3.8 litre engine propelling the Cooper into the Stirling Moss Trophy front-runners.

In last year’s Woodcote Trophy battle, it was the Jaguar D-type of Gary Pearson who took the flag with the Cooper T38 (then in its 3.4 litre engine guise) of Fred Wakeman and Patrick Blakeney-Edwards hot on his heels and the deep red Maserati 250S of Martin Stretton and Richard Wilson finishing in third.

In this year’s line-up we look forward to a feast of ’50s Jaguars. Three D-types will head up the grid, with the Pearson brothers (Gary and John) highly likely to be the pacesetters. Ben Eastick drives with Karl Jones, and Richard Guy drives solo. Four C-types join the fun including James Hanson and Paul Pochciol who enjoyed podium success at Thruxton in June. Rudi Friedrichs drives solo, Fred Wakeman and Patrick Blakeney Edwards need careful pit stop co-ordination to campaign Fred’s C-type and Nigel Webb and John Young are also in with a good chance. Chris Ward co-drives the rather more serene Jaguar-powered Ecurie Ecosse XK120 with Josh Ward. Marc Gordon completes the Jaguar model line-up in his XK140.

Reviving the great battles of the early 60s, with an impressive selection of GT cars is the Royal Automobile Club Tourist Trophy for Historic Cars (Pre 63’ GT series). Earlier this year at the Donington Historic Festival the honours were taken by the Jaguar E-type of Jon and Jack Minshaw who converted their pole position into a confident win ahead of the Aston Martin DB4GT of Wolfgang Friedrichs driving with Simon Hadfield and the Jaguar E-type of Chris Milner and Nigel Greensall.

This weekend, Martin Hunt returns driving the Cobra solo, one snake against 14 big cats in the form of the Jaguar E-types. Jon and Jack Minshaw will be looking to add their name to the list of TT winners after their Donington result. James Cottingham and Harvey Stanley return, alongside Gregor Fisken driving this weekend with Patrick Blakeney-Edwards. More E-type solo drivers include John Young, John Clark and Tony Wood – all very capable drivers. The Jaguars are joined by two Aston Martin DB4s; the GT of Wolfgang Friedrichs, and DB4 of Alan Middleton plus a blue Tojerio GT EE driven by Till Bechtolscheimer.

Behind the front running pack in Class C for cars up to 3000cc, you’ll find seven Austin-Healey 3000s, amongst them Alex Bell driving with Julian Thomas; Mike Thorne driving with John Todd and Mark Holme driving with Nigel Greensall. In the same class Chris Woodgate contests the Aston Martin DB MkIII, and the Halusa brothers bring out the family Ferrari 250GT Breadvan. 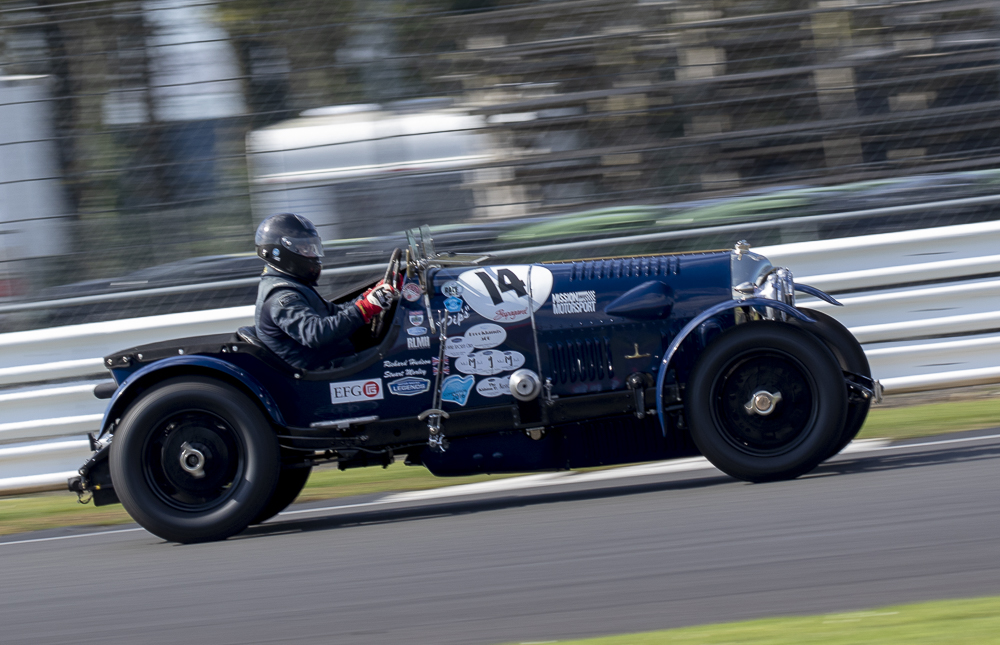 The Motor Racing Legends Kidston Trophy for Pre-War Sports Cars is one of the feature races of Silverstone Classic this year, thanks to a special award - the ‘Bentley Centenary Trophy’ which will be presented to the first Bentley home, marking the 100th anniversary of WO Bentley founding the company that carries his name.

As you would expect there is an impressive line-up of pre-War Bentleys, dominating the over 3 litre class. Many of them have been in family ownership for several generations. Look out for Martin Overington with his 4.5 Bentley Blower, regular podium visitors are Bentley racers Clive Morley racing with his son James, and Richard Hudson racing with James’ brother Stuart Morley both in Bentley 3/41Ž2 models. Katarina Kyvalova brings out her Bentley Six Speed driving solo.

The Bentley 3/41Ž2 of Ewen Getley raced at Brooklands in 1933 and has been in his family ownership since 1956 and the similar car of Neil Sandwith was built by the owner’s grandfather, Hugh Haben - a former president of the Bentley Drivers Club. In fact the only non-Bentley runner in this class is Gregor Fisken driving his fabulous Vauxhall Hughes Special co-driving with Jeremy Brewster. In the under 3-litre category, Motor Racing Legends chairman and current President of the Bentley Drivers Club, Duncan Wiltshire, brings out his blue Bentley 3 litre alongside Jock MacKinnon in a similar car.

In previous Kidston Trophy races we have seen the honours taken by the lighter, quicker and more nimble cars such as the Talbot 105 Team car of Gareth Burnett who won in 2017 after a fearsome battle with the chain-driven Frazer Nash of Patrick Blakeney-Edwards and Fred Wakeman.

The pre-War sports car race this year will be preceded by some pomp and ceremony, including half a parade lap, as cars transit from the National Paddock to the Wing building for the start.

Another feature race of the event is the Historic Touring Car Challenge celebrating the anniversary of the Ford Capri, with a special one-off award named after, and presented by, racing legend Gordon Spice.

As expected, a number of Ford Capris will be out contesting this special award. Ric Wood and Adam Morgan will surely be the pace setters, but 50 minutes is a long time to wrestle with 3.0 litres of heavy metal. Steve Dance recently led the race for some time at Thruxton in his 3.4 litre Capri until the diff gave up in the final laps. Miles Griffiths and Gordon Shedden also join this battle in an original Ford Capri RS2600 converted to 1973 racing specification.

Last year’s HTCC race was won by the father and son team of Nick and Harry Whale who finished on the top step of the podium after a hard-fought battle again fellow BMW M3 competitors Mark Smith driving with his son Arran. Both BMW M3s are back this year, ready for a new battle, this year Mark Smith is driving two M3s – one with son Arran and the second with Colin Turkington. But this year they are joined by no less than eight Ford Sierra Cosworths RS500s now racing for overall position having previously been invitation entries. Calum Lockie and Julian Thomas took the honours to this race at May’s Donington Historic Festival in difficult conditions. Other RS500 runners include Craig Davies driving solo, Michael Lyons in New Zealander Peter Sturgeon’s car and Carey McMahon all the way from Australia in the striking original Benson & Hedges liveried car.

The Tony Dron Trophy , named after the ’70s Touring Car ace, runs within this grid, for which there is a separate podium after the race. Amongst these runners you will find another battle going on, and more importantly six more 3.0 Ford Capris all running to period specification including original Group 1 brakes, so you will see significant time differences to the more modern era cars. Here you’ll find Mike Whitaker’s red Ford Capri  - the actual Gordon Spice car from 1979 BTCC, and Andy Christopher and Costas Michael running an exact recreation of this car.

Other cars to look out for this weekend amongst the sea of fast Fords and big brightly coloured Rovers, is the bright blue and white MG Metro Turbo driven by former BTCC star Patrick Watts this time co-driving with ‘mini’ superstar Nick Swift.

All the action will start on Friday 26nd July with qualifying sessions for all races. 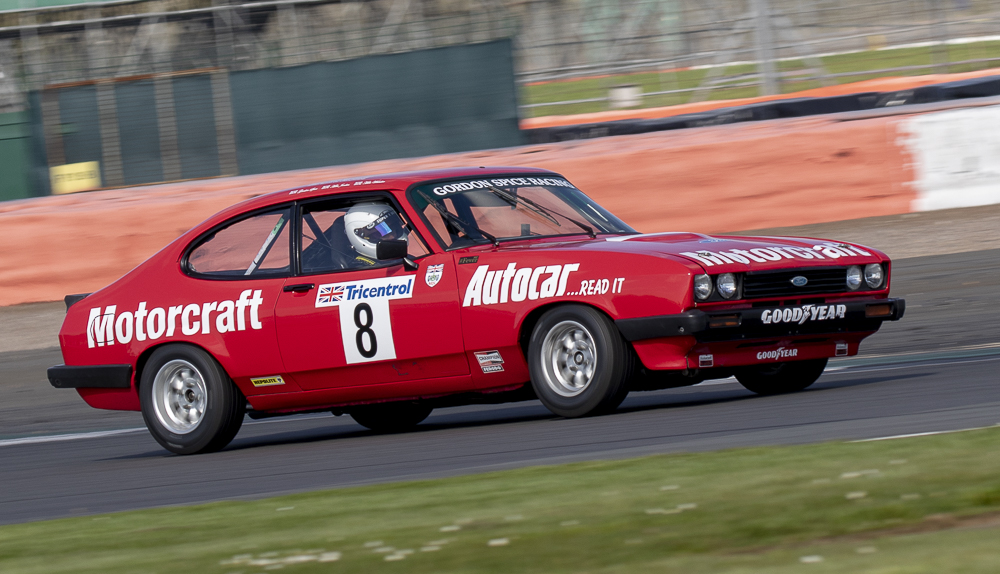