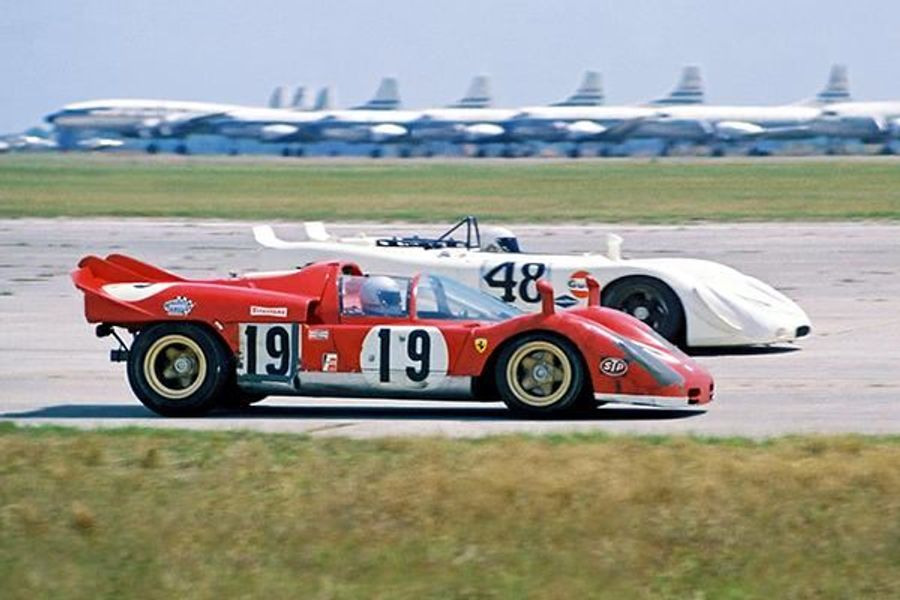 A new sponsor and event updates and details for the Historic Sportscar Racing (HSR) Alan Jay Automotive Network Classic 12 Hours of Sebring, Pistons and Props, at Sebring International Raceway, Florida, December 1st to the 4th, were announced this week by HSR officials.
The on-track and on-the-runways celebration of the legendary 12 Hours of Sebring endurance race and historic Hendricks Field, the military and civil aviation facility on which the race is run every year, will be among the first events of its kind in the United States, and perhaps the world.
The lasting connection between historic race cars and aviation will come to life with sports cars and classic airplanes parked next to each other on Sebring's hallowed ground. Still in part an active airport, the Classic 12 Hour, Pistons and Props, will see vintage aircraft land on one of the Sebring runways and taxi into the paddock to be displayed right alongside the historic race cars. A group of race car drivers will be asked to judge the planes for "best in show" title and much more.
"It is an honour for HSR to join with Sebring International Raceway in recreating seven decades of the 12 Hours of Sebring and to pay tribute to the iconic facility's rich aviation history," said HSR President David Hinton. "On the racing side, we will be able to showcase all generations of sports car racing in the United States with the iconic makes of the 1950s all the way up to modern Daytona Prototypes that will soon to be retired from IMSA."
Also announced were numerous event updates and details and the addition of Classic Motorsports Magazine as presenting sponsor for the Alan Jay Automotive Network Classic 12 Hours of Sebring.
Following the model of its successful HSR Classic Motorsports Magazine Mitty each April at Road Atlanta, the leading vintage and historic motorsports publication will support the Classic 12 Hours of Sebring with car club corrals, vendor areas, sponsor and spectator promotions and much more.
"This is such an exciting new event for HSR and we are thrilled to not only have the race track involved but also the Sebring Airport Authority, Alan Jay Automotive Network and Classic Motorsports Magazine," Hinton said. "I truly believe that this has all the ingredients to make this event a 'must attend' on the worldwide motorsports and aviation special events calendars."
The Sebring event weekend will also include the season-ending events for the 2016 HSR sprint and enduro series, including the year-end awards celebration.
A United States Army Air Force (UAAF) base, Hendricks Field officially operated from January 1942 until December 31st, 1945. During its operation the base trained hundreds of combat crews, primarily in B-17 "Flying Fortress" bombers.
Sebring International Raceway Pistons and Props Historic Sportscar Racing HSR Alan Jay Automotive Network Classic 12 Hours of Sebring