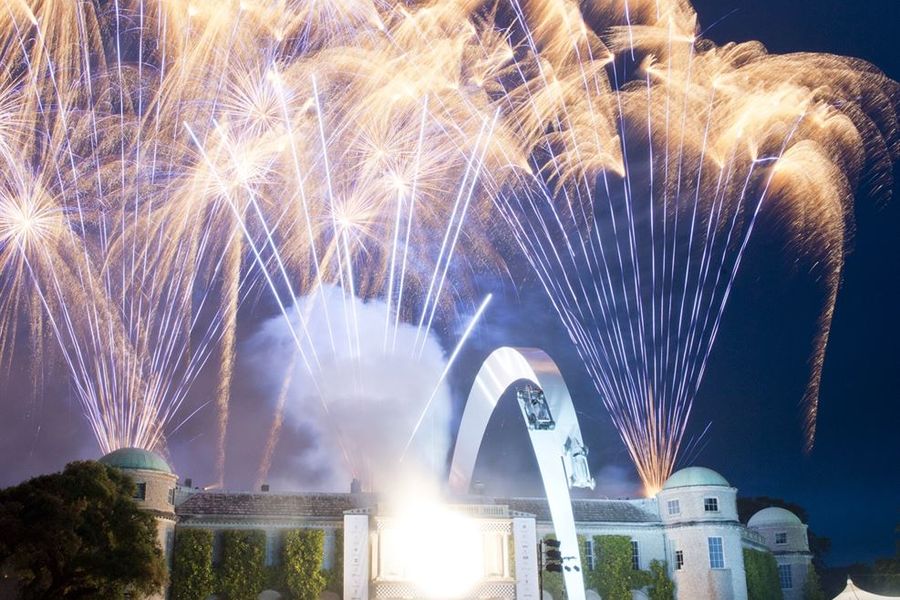 Every year the Goodwood Festival of Speed creates an impressive centrepiece for its Central Feature that celebrates the main sponsor at the Festival, and this year, the rule book has been re written with an enormous and impressive sculpture paying homage to Mercedes – Benz’s illustrious Motorsports history spanning 120 years. The sculpture soaring 26 metres over Goodwood House, weighing 160 tonnes and measuring 90 metres in length will be unveiled in spectacular style by Lord March and Michael Bock, Head of Mercedes-Benz Classic. Created by artistic genius Gerry Judah, the sculpture is the most complex and ambitious yet conceived at Goodwood and is a fitting celebration of 120 years of motorsport participation by Mercedes-Benz. Swooping over Goodwood House, the curve – which spans 45 metres – tested the artistic and engineering ingenuity of the team of specialists assigned to making Gerry Judah’s concept a reality. Two cars spanning 80 years form an integral part of the sculpture – a replica of the 1934 Mercedes-Benz W 25 Silver Arrow of the kind raced by Manfred von Brauchitsch to victory at the Nurburgring Nordschleife and a MERCEDES AMG PETRONAS F1 W04, the same chassis raced by Lewis Hamilton in 15 Grand Prix in 2013. The car forms a special part of recent racing history, having taken Lewis Hamilton to five pole positions and to victory at the Hungarian Grand Prix. Michael Bock commented: “The sculpture goes beyond my wildest expectations. It’s truly amazing and an apt focal point for what promises to be a vibrant celebration of the most thrilling, most charismatic and most beautiful racing machines ever created. Our support of the Festival of Speed is stronger than ever this year as we celebrate 120 years since Daimler-powered cars won the first motorsport events in 1894. These tentative first steps set us on a course that’s led us to where we are today – here’s to the next 120 years of thriving competition, both on and off the track.” In unveiling the sculpture, Lord March commented: “This year’s Central Feature is the most architecturally and artistically challenging sculpture that we’ve ever had at Goodwood and it’s a testament to the out-of-the-box thinking of Gerry Judah, which is very much aligned with our philosophy of constant innovation around the Festival of Speed. The result is a truly spectacular sight for all our Festival of Speed visitors to view” The unveiling will be accompanied by a spectacular evening fireworks show and a fleet of Mercedes-Benz road and race cars making a dramatic and unique run up the Goodwood Hill as the sun sets. A century-old Mercedes Grand Prix car, an SSK from 1928, the mighty W 196 R from 1955 and a fire-breathing Sauber-Mercedes C9 from 1989 all feature.