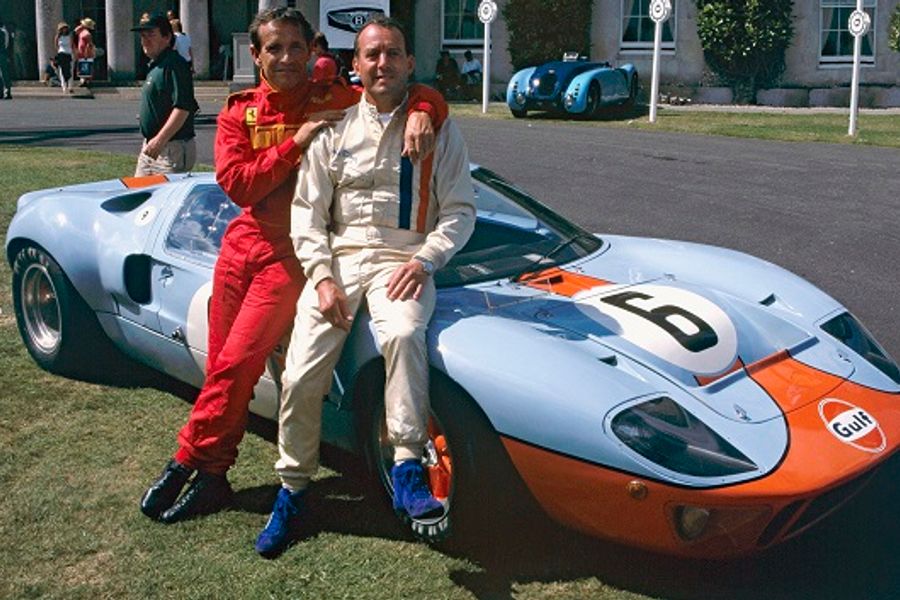 At this summer’s Festival of Speed Goodwood is turning the clock back 50-years to mark the 1969 Le Mans 24 Hours.

The winners that year – Jacky Ickx and Jackie Oliver, will both be at Goodwood on 4th-7th July this year to drive the winning Ford GT40 from 1969. The Festival of Speed will be one of the only opportunities this anniversary year to see the famous trio reunited.

The 1969 Le Mans 24 Hours was a remarkable race for many reasons. While it was the second Le Mans victory in a row for JW Automotive, it was the fourth for Ford’s GT40, sealing its place in history as one of the most successful sports cars of all time. Porsche had yet to win the 24 Hours, but the German manufacturer was firm favourite in 1969.

A year earlier, Willy Mairesse crashed and was serioulsy injured while trying to shut his door on the first lap of the race. The accident could have been avoided had it not been for race’s traditional Le Mans start, which saw drivers run across the circuit to their waiting cars. Jacky Ickx, having qualified down in 13th position, protested by walking slowly to his car at the start of the race. It was almost enough to lose him the 24 Hours – his first of six victories at La Sarthe.

Despite many of the works Porsches dropping out of contention, Ickx and Oliver only beat the second-placed 908 of Hans Hermann and Gérard Larrousse by roughly 100 metres after the 24 hours of racing. Indeed, the final laps were more akin to a Formula 1 race, with the GT40 making up ground on the corners, and Hermann’s 908 reeling it back on the straights. On the final lap alone, the two cars passed each other four or five times. Such was the crowd’s delight, it invaded the circuit when the race finished.

Ickx, of course, would go on to win the race a further five times, while Porsche would finally score its first victory with Hans Hermann and Richard Attwood the following year. Jackie Oliver wouldn’t win Le Mans again, nor would Ford’s GT40. Their place in history, however, had been sealed.

Jackie Oliver said: “Le Mans, the World Championship, Formula 1 and the Indy 500, back then it was the absolute crème-de-la-crème of drivers. It’s wonderful and I’m delighted to hear that the Duke of Richmond has decided to celebrate this anniversary with the original GT40. It wasn’t the quickest car in the race, but John Wyer put together a great strategy which ultimately gave us the win. I learned a lot from him when I founded my own team.”

Not only will Ickx and Oliver take to the Goodwood Hill in the race-winning car, but there will also be a selection of other machines and drivers from the 1969 Le Mans 24 Hours at the Festival of Speed.