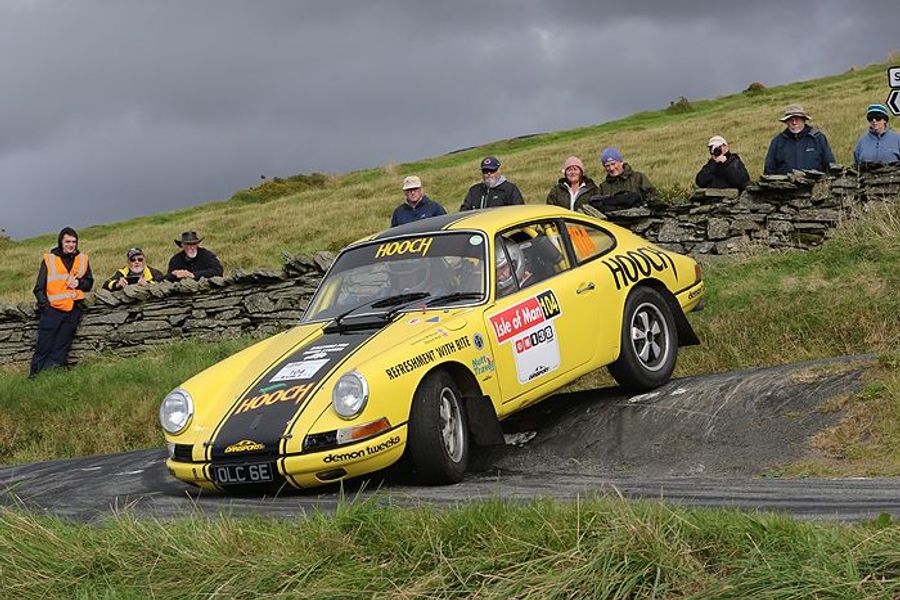 For the second time this season, the Mintex MSA British Historic Rally Championship and the Fuchs Lubricants R.A.C. Historic Asphalt Championship come together on the same event; this week’s Rally Isle of Man (14th-16th September).
The Fuchs Lubricants R.A.C. Historic Asphalt Rally Championship is organised by the Roger Albert Clark Rally Motor Club and is a dedicated asphalt championship for all categories of historic stage rally cars.
Rounds five and six of the asphalt championship will run to the same double-header format as the BHRC on the famous Isle of Man event and the overall title could be decided if island experts Dessie Nutt/Geraldine McBride (Porsche 911) take one more maximum score to add to the four they have taken across the opening four rounds. However, an event maximum on this event for Roger Moran (BMW M3) would also give him a perfect score, so it is possible that there will be joint champions at the end of the season.
Aiming for overall R.A.C. victory on the rally will be three crews in very rapid Ford Escort Mk2s. Neil Williams from West Wales in his Escort Mk2 is also registered for the BHRC, as is Rob Smith/Alun Cook and it was Smith who narrowly took top points last time out on Epynt. Meanwhile, Guy Woodcock is always rapid on the island and will want to make up for last year’s non-finish when major engine dramas sidelined him late in the rally.
More rapid Ford Escort Mk2 crews are Barry Stevenson-Wheeler/John Pickavance and brothers Simon and Alister Crook, while a second of the magnificent BMW M3s will be in hands of Paul Smith/Tudor Jenkins. This will be Smith’s first taste of closed road rallying after tackling two Epynt rallies earlier this summer.
Lyndon Barton and Simon Hunter are out in their Ford Escort while some wonderful variety is found in Category 1 as Nutt’s Porsche 911 is joined by the MG Midget of Bob Seager and the Saab 96 of Nick Pinkett/Hugh Myers. After this event, the Fuchs R.A.C. season concludes on the Jersey Rally in mid-October.
Rally Isle of Man will be based at the TT grandstands in Douglas. The first car will start at 3pm on Thursday (15th September) and arrive at the finish at around 2pm on Saturday after around 150-miles of competitive action.