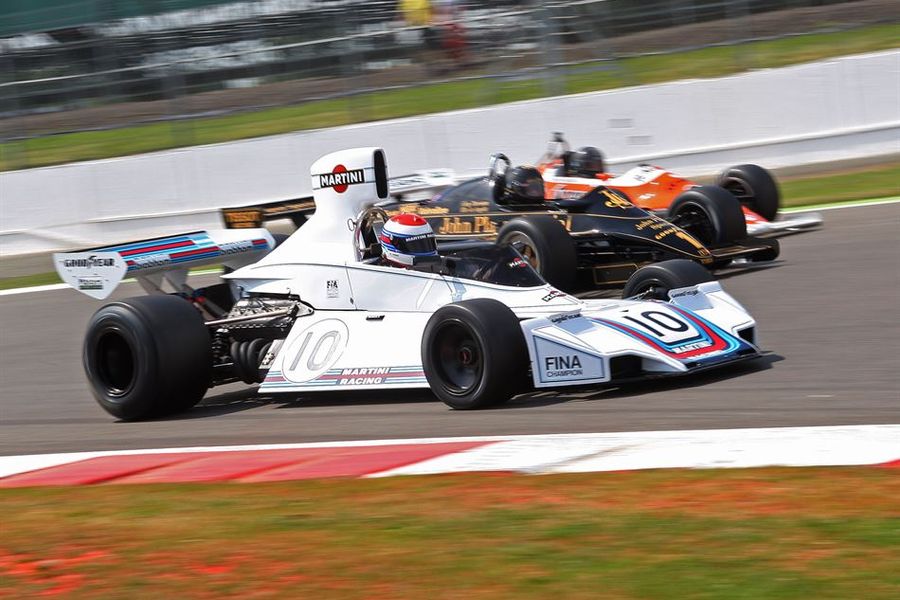 During 2014, from Silverstone to Spa and from Barcelona to Brno, Masters Historic Racing put on a spectacle at the most prestigious circuits in Europe. Big grids, evocative cars and fierce racing have been a hallmark of the Masters season, with fans across Europe being treated to a superb showcase during the 2014 season.

During the 2014 season, the Masters Championships had 590 drivers taking part, with 298 different drivers scoring points from 21 different countries. Masters is proud to crown its 2014 series champions after a hard-fought season.

The FIA Masters Historic Formula One Championship enjoyed a stunning season with Steve Hartley (Arrows A4) and Manfredo Rossi di Montelera (Brabham BT42) being crowned the champions from the Post and Pre-1978 division respectively. Hartley took five aggregate wins from the eight rounds in the Post-1978 division, chased by Simon Fish (Ensign N180) and Christophe D’Ansembourg (Williams FW07) who took a win each. In the Pre-1978 category, Rossi di Montelera took three wins to stave off the attack of Andrew Beaumont (Lotus 76/2) and Max Smith-Hilliard (Lotus 77).

Leo Voyazides and Simon Hadfield (Lola T70 Mk3B) were the FIA Masters Historic Sports Car Champions despite missing the Nürburgring round in August. They won the Rodriguez class on six occasions to secure the overall title from Andy Newall with class-winners Keith Ahlers/Billy Bellinger just two points adrift of the Gelscoe Motorsport boss. Jason Wright’s Lola T70 Mk3B tied on points with Ahlers/Bellinger, but lost the class title to Voyazides/Hadfield by 10 points.

Keith Ahlers/Billy Bellinger were the winners of the Gentlemen Drivers Pre-66 GT Championship, their class C2-winning Morgan SLR taking the outright crown by five points from Class C3 winners Leo Voyazides/Simon Hadfield (AC Cobra). Newcomer Mark Martin was third overall and also won of the CLP Class for the lightweight cars in his Lotus Elan, while father-and-son Mark and Simon Ashworth were the C1 class winners in their TVR Grantura.

Leo Voyazides took the Masters Pre-66 Touring Car title in his Ford Falcon Sprint, Leo electing to race solo at Brands Hatch and thus outscoring regular co-driver Simon Hadfield. The Lotus Cortina of Graham Wilson/Andy Wolfe won its class, while the best of the Mini pilots was Masters supremo Ron Maydon who enjoyed some fierce tussles on his way to class glory.

Masters Historic Racing Event manager Rachel Bailey said: “Congratulations to all our champions at the end of a superb season. We have enjoyed some wonderful venues, been treated to some excellent racing and taken the history of motor sport to audiences across Europe and let them see how the sport looked in earlier years. We are thrilled with the competitor support that we have and thank all our drivers as we look forward to seeing them on track again in 2015.”