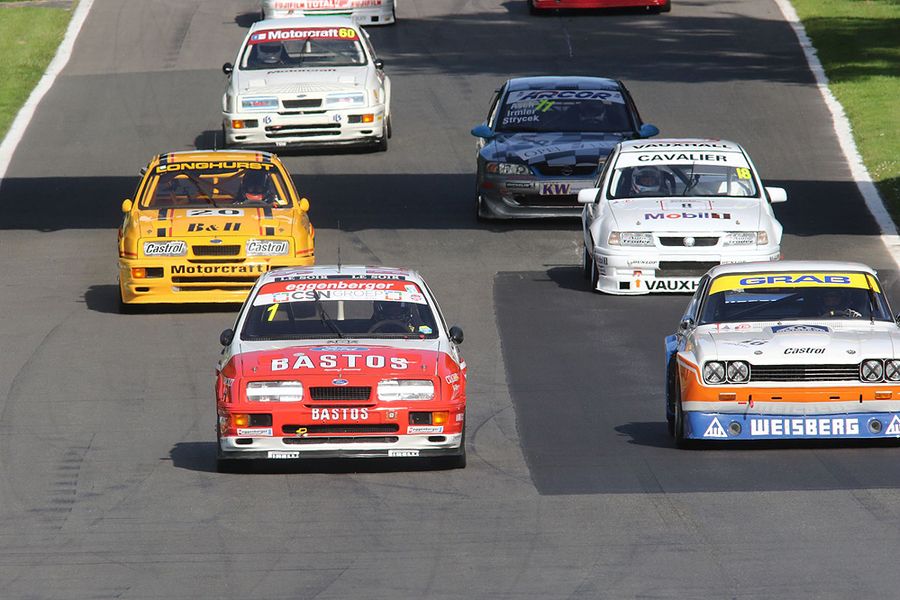 Soaring temperatures were a major feature of the Historic Sports Car Club’s Legends of Brands Hatch meeting over the weekend (29/30 June) as a busy 17-race schedule delivered some outstanding racing on the fabulous Grand Prix circuit.

With the temperature hitting 34 degrees on Saturday, overheating, fuel vapourisation and tyre conservation were all a challenge but strong grids and excellent racing were still very much the norm.

On behalf of the HSCC race organising team, a special word of thanks went to all the volunteer marshals who worked as professionally as ever despite the ferocious heat on Saturday. AS ever, everyone involve din motorpsort and especially the competitors are extremely grateful for their on-going support.

Two half-hour Thundersports races delivered a fine grid of glorious cars with John Burton taking a double win in his Chevron B26. However, Burton was quick to acknowledge that Dean Forward should have won the opener. Unfortunately the mighty McLaren M8F went out with engine problems in a race of attrition. An unfortunate contact with Burton pitched Tony Sinclair’s ex-Chris Craft Lola T292 into a spin and retirement in the gravel. Burton also spun and continued, but was confirmed as winner when the race was halted. James Schryver had to contend with clutch issues in his Chevron B26 but was just able to fend off Jonathan Mitchell (B19) for second.

Most of the cars were ready to go again in Sunday’s second part and even a late pre-race fuel scare failed to unseat Burton. Tony Sinclair led chase of Burton from a small distance while Ross Hyett again topped the Sports 2000 pack as other front-runners hit trouble.

Cameron Jackson’s winning run in Historic Formula Ford finally came to an end after a fine battle with Richard Tarling. Tarling’s return to Historic Formula Ford in his 2017 title-winning Jamun posed the biggest threat to date to Jackson’s dominance but with Tarling back in sixth on the grid and further handicapped by a first lap misfire, Jackson romped clear on Saturday. Spins for Ben Tusting and Pierre Livingstone cost them time and the charging Tarling blitzed through to second from Ed Thurston.

Tarling started second on the grid for Sunday’s race and had a titanic battle with Jackson. It was racing of the highest order and the lead changed constantly. However, into Paddock on the penultimate lap Tarling just squeezed ahead of two backmarkers and earned a small margin. Jackson responded but Tarling won round nine by just a second.

The Formula Juniors also turned in a cracking race on Saturday. Sam Wilson worked to the front of a tight leading quartet, which was reduced when Peter Morton had a rose-joint fail on the Lightning at Druids.

Instead, Wilson battled with Tim Da Silva and Andrew Hibberd until a backmarker delayed the leader and he was edged back to third. Running in the tow in the sweltering heat caused Wilson’s engine to run too hot and he eased back to avoid any damage. Meanwhile, Da Silva and Hibberd diced to the flag as the Californian took a win on his Brands debut. He was quick to thank team leader Hibberd for the assistance in learning the track.

Michael Lyons was in stunning form as he won four races, twice climbing straight out of his Lola T400 Formula 5000 into the Eggenberger Sierra RS500 Cosworth of Peter Sturgeon to dominate the Dunlop Saloon Car Cup. The bumper XL Aurora Trophy could not stay with Lyons but Tim Da Silva was a strong second in a recently rebuilt Chevron B35 while Andy Smith worked up to third from 14th on the grid after clutch problems in qualifying.

On Sunday, Lyons did it again and this time Smith led the chase after Da Silva posted an early retirement. Marc Mercer just fended off Steve Worrad to complete the overall podium. A little way back, a fabulous race-long contest between Frank Lyons (Lola T330) and Ben Stiles (Van Diemen RF82) narrowly went to the Formula 5000 despite a brave effort by Stiles.

The Dunlop Saloon Car Cup featured three mighty RS500s but it was the ‘Cologne’ Capri of Steve Dance that chased Lyons on Saturday. On Sunday, Australian Carey McMahon achieved a 50-year ambition by racing at Brands and finishing on the podium while Steffan Irmler made the journey from Germany worthwhile with a podium finish in his Opel Vectra.

Gary Pearson (E-type) went solo for an hour in Saturday’s high temperatures to win the Jaguar Classic Challenge despite a dogged chase by Ben Short and series newcomer Simon Orange. In the closing stages a slow rear puncture hampered the Orange car and helped the Simon Butler/Martin Rich E-type to take second. However, those places were later reversed when the Butler/Rich car picked up a five-second track limits penalty.

Running over an extended 30-minute duration in rather cooler conditions on Sunday afternoon, the two Road Sports classes delivered strong and varied grids. In the 70s division, it was a Lotus affair in the absence of a holidaying Charles Barter and Jim Dean set the early pace before retiring his Europa. Jeremy Clark (Lotus Elan) took over at the head of the field but could never relax in the face of a dogged pursuit by the Europa of Will Leverett as Will’s dad Mark completed the podium in his Elan. 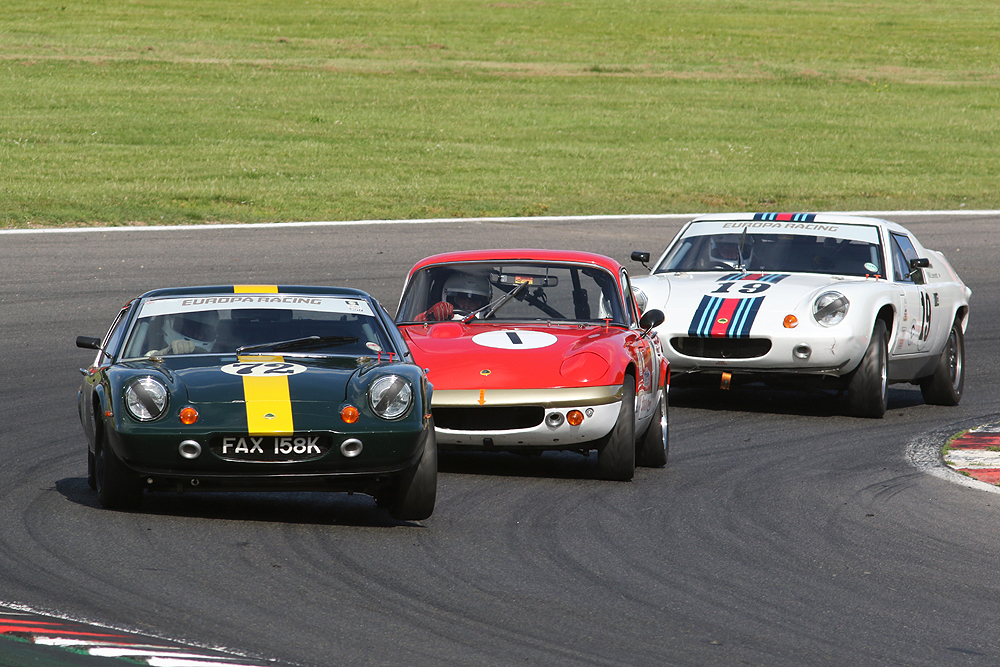 Kevin Kivlochan (AC Cobra) added another Historic Road Sports victory to his growing tally but the hard-charging Richard Plant (Morgan Plus 8) was always in contention and was just 1.6s adrift after more than half an hour of racing. A mid-distance safety car nearly caught Kivlochan out as, as the re-start, he went too deep into Druids and allowed Plant to get even closer. Jonathan Edwards brought his Morgan into the final podium position but lost his rival Shad Eddin when the Ginetta G4 cried enough on the final lap.

Charles Allison (Chevron B8) topped the Guards Trophy at the expense of the increasingly brakeless Elva Mk7 of Max Bartell and Callum Grant. Bartell set the early pace but Allison emerged from the pit stops in good shape as Grant began to run short of brakes. Allison duly moved ahead before a red flag after Andrew Hibberd’s Lotus 23 ran out of brakes completely and plunged into a gravel trap. A track limits penalty for the Bartell/Grant Elva further consolidated Allison’s margin, while John Spiers drove a strong race to take third overall and GT spoils.

However, Spiers could not relax as the James Schryver/Luke Stevens Chevron B8 and the fellow TVR Griffith of Mike Gardiner/Dan Cox were close behind when the results were taken back to the end of lap 16.

The guesting HGPCA races maintained the close racing theme with an excellent entry of Grand Prix cars. In the Pre ’61 division, Richard Wilson (Ferrari Dino) won on Saturday, but had to give best to the charging Rod Jolley in the Lister Jaguar ‘Monzanapolis’ on day two. In the Pre ’66 division, Barry Cannell (Brabham BT11A) won twice despite the challenge of the Cooper of Rudi Friedrichs on Saturday and Andrew Beaumont (Lotus 18) on Sunday. 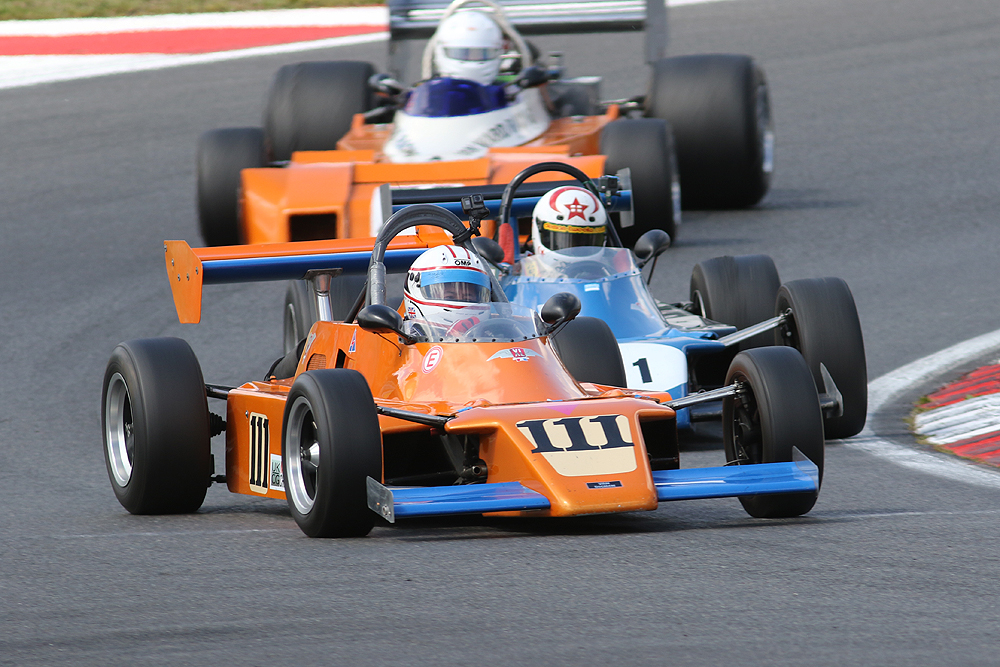