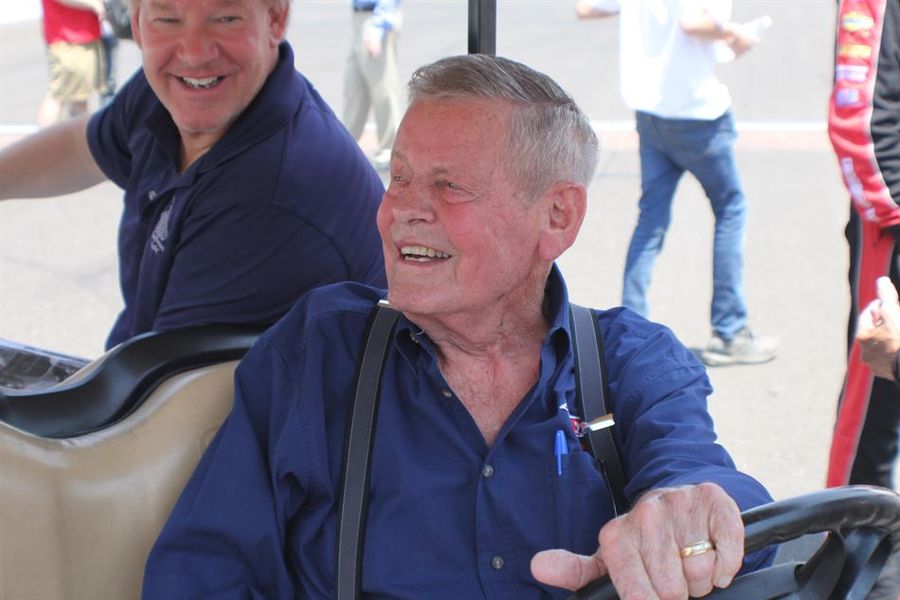 The Indianapolis 500 Mile Race is an American racing Memorial Day tradition.   Back before mobile phones, the Internet and instant information gratification, “Indy or “The 500”, was something magical brought into your home first via radio then delayed Television and finally live in the late 70s. It was a motorsports fantasy world dominated by men that the late, great, American motoring journalist Chris Economaki called the “knights of the roaring road.”  While those racing legends are no longer with us to tell their tales, the machines that carried them to racing immortality are.  And each year at the SVRA’s Brickyard Invitational you can relive those memories up close and personal.  A day spent in the “Pre-War Paddock” is a rare chance to drift back to a time when, yes, “the tires were skinny and the drivers were fat!”

This multi part series will focus on the cars that were the stars of the show at Indy amid an overload of motoring sites and sounds at this spectacular annual event.   So far we have looked at cars from National, Mercer (the Raceabout), E-M-F Model 30 and Locomobile #9. You can find those in the archive.

Part 5 of our series examines two cars that tie together two of America’s greatest racers, Dan Gurney and Bobby Unser.  Two cars that got a lot of fan attention at the Brickyard were two Gurney AAR Eagles that helped Bobby Unser build his name at Indianapolis, the Rislone Leader Card Eagle and the Olsonite Eagle #6.

For me personally my racing interest as has been chronicled on this site before came of age during an exciting time.  At the Speedway, “The 500” was growing even bigger in stature as technology and faster speeds coincided with a burgeoning interest in the American motorsports scene.

After the rear-engine revolution of the mid-sixties lead by Lotus an American icon brought his own cars to the Speedway.  Dan Gurney and his Eagles.

The #6 Rislone Leader Card Eagle is iconic not only for its driver but the team that fielded the entry.  Leader Card Racers founded by paper magnate Bob Wilke has been synonymous with the Indy 500 and Midwest dirt track racing for four generations starting back before World War II and continuing today.  During that time they won no less than 17 National Championships, the first in 1959, the most recent 2007!  Leader Card won the Indianapolis 500 3 times, twice with Roger Ward (1959 & ’62) and once with Bobby Unser in another Eagle in 1968.

While Wilke supplied the drive and backing, two other Indy legends supplied the mechanical know how behind the Leader Card success, A.J. Watson and Jud Phillips.  Phillips acquired the #6 for the 1967 season for Bobby Unser to drive.  The car was fitted with a Ford V8.  The car finished 9th at the 500 but carried the Leader Card team to the USAC Car Owner National Championship.  The car was retained for the ’68 season with its Ford engine and helped Unser win his 1st USAC National Championship along with a ’68 Eagle with an Offenhauser turbo.  Unser and the team used the car again in ’69 after switching the power plant to an Offy turbo.  It was described as his accustomed short-track car.  The car was heavily damaged at Phoenix at the end of the ’69 season it was repaired and raced again in 1970.  The car was transferred to the Watson half of the Leader Car team and was re-liveried in its ’67 colors.  The car was sold to and given a full mechanical restoration Australian Aaron Lewis.  Current owner Scott Borchetta the founder of Big Machine Records purchased the car in 2014.

The other car on hand at Indy this year was the famed #6 Olsonite Eagle that Unser used to take poll in 1972 at a stunning 195.94 miles per hour, shattering the old mark by over 17 miles per hour. It still ranks as the largest one year speed record increase in Indy 500 history.  Unser used that speed advantage to dominate the first 30 laps until he slowed and headed to the pits with a broken ignition rotor.

The car was also used in ’72 at Michigan, Pocono and Ontario.  Wally Dallenbach raced the car at Indy in 1973.  Jerry Grant ran the car as well as did the Pat Patrick’s racing team.  Grant qualified the car 2nd at Ontario in ’73 before crashing heavily.  The car remained in storage at Gurney’s All American Racers until Mike Lewis and John Weatherwax and John Mueller.