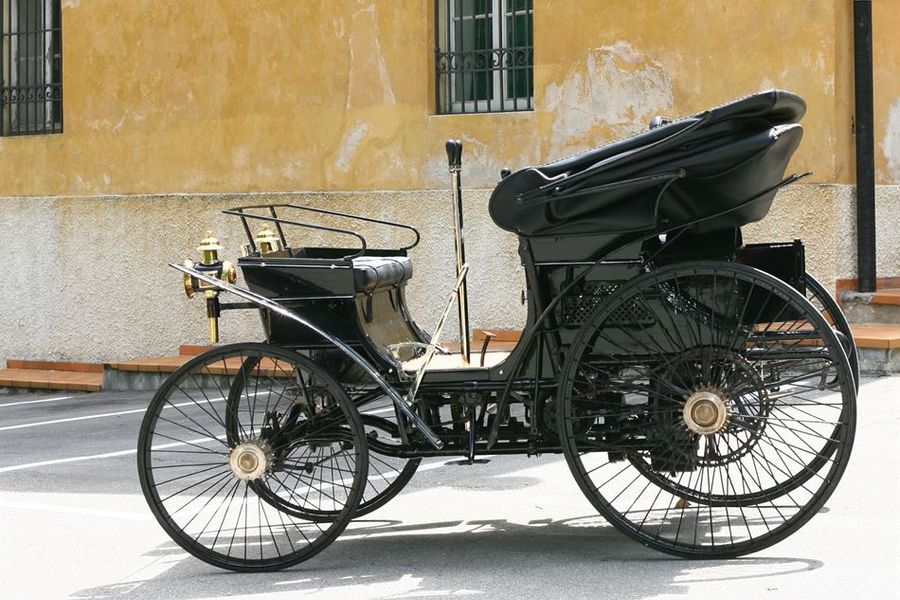 The very first car to have been driven on Italian roads is one of the special entries in this year’s Bonhams London to Brighton Veteran Car Run supported by Hiscox. It was owned by wealthy textile industrialist, Gaetano Rossi. He ordered the car in 1892 and it was delivered to his home in Schio, Vicenza, in the north of the country in January 1893.
However, the car was not Italian, but French, an early 2.5 hp twin-cylinder Peugeot Type 3 with chassis number 25. When Rossi, a friend of Armand Peugeot, purchased a second Peugeot in 1896, he gave the Type 3 to a friend, Guido Lazzari.
Lazzari lived in Aiello del Friuli, which was then part of the Austro-Hungarian empire but lost to Italy in the First World War.
When Italian troops entered Aiello del Friuli, parts of the car were taken and the pioneering Peugeot was laid up. The car lay forgotten for some years until, in 1955, the Lazzari family – Guido died in 1953 – offered it to the Turin Automobile Museum in exchange for a then-brand new Fiat 1100.
Partially restored in time for the museum opening in 1963, the Peugeot was initially thought to be a later model but its true provenance was uncovered in 1999 by Fabrizio Taiana of the Club Storico Peugeot Italia. Until his detective work revealed the truth, the honour of being the first car on Italian soil was held by a Panhard et Levassor, which was driven in Florence in 1894.
Since then, the Type 3 has undergone a further full bodywork restoration in 2007 and, this year, its engine and other mechanical parts were reconditioned in preparation for its debut on the world-famous London to Brighton Run.
With the 2017 Bonhams London to Brighton Veteran Car Run supported by Hiscox having a French theme, it is appropriate that the ‘Italian’ Peugeot will be taking a starring role: as the oldest car on this year’s Run. It has been given start number 1 and will be the first car away. It is officially entered by the Museo dell’Automobile di Torino but will be driven by Count Alessandro Rossi di Schio – a direct descendant of the car’s very first owner.
“This is a genuinely fascinating car. One of the earliest Peugeots in existence, it is also one of the most significant and will come to London in November with an intriguing back story. It is absolutely fitting that it will be driven to Brighton by a member of the original owner’s family,” said Peter Read, Chairman of the Royal Automobile Club’s Motoring Committee.
The 2017 Veteran Car Run will be held, as ever, on the first Sunday in November – this year, it falls on the 5th – and is organised by the Royal Automobile Club.
As dawn breaks, a red flag will be ceremoniously ripped up and the 400 entries will start their journey from capital to coast: the Run celebrates the passing into law of the Locomotives on the Highway Act in November 1896, also known as the Red Flag Act, and refers to a time when these new-fangled machines had to follow a man holding a red flag.
More than 400-veterans have entered this year among which are a large contingent of cars constructed in France. While Germany is generally considered to be the birthplace of the motor car, it was the French who accelerated the concept of the horseless carriage and was by far the biggest automobile producing nation as the 19th century turned into the 20th century. This year’s Run has adopted a French theme in honour of the country’s contribution to motoring.
The Run is just one element of the Royal Automobile Club’s London Motor Week. A full week crammed with motoring happenings, popular events include the free Regent Street Motor Show. Held on Saturday 4th November, it turns London’s premier shopping street into a motoring showcase that puts the spotlight on veterans, classics and moderns alike.