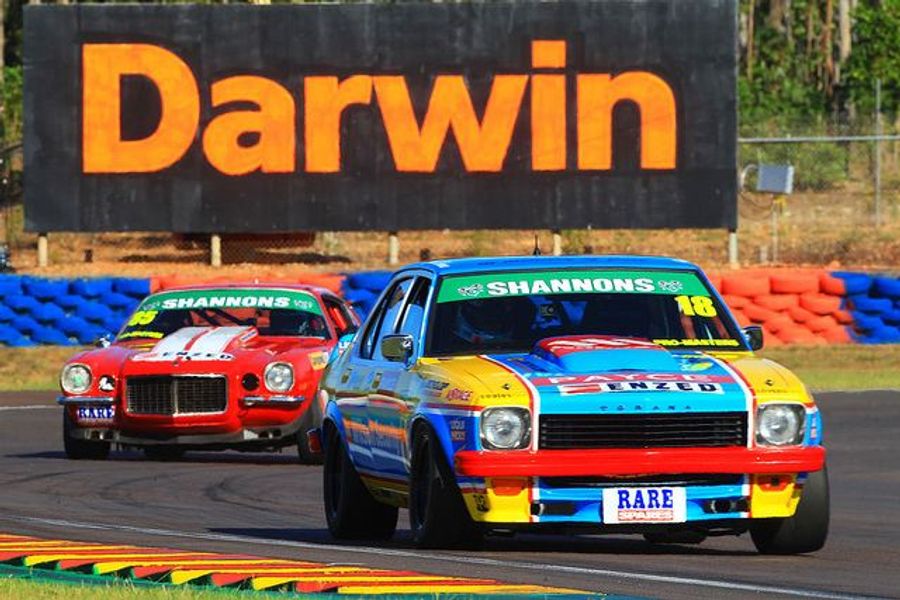 The reunion of the Bowe and Johnson racing families under the same banner has instantly delivered the tight competition expected, during practice for round four of the ENZED Touring Car Masters today in Darwin. John Bowe edged out Steven Johnson in today’s practice times, the Torana beating the Mustang by the tiny margin of 0.07s on a super-fast day at Hidden Valley Raceway.

The new track surface instantly delivered record lap times with Bowe’s fastest of 1m13.5842s a full 0.6s under the existing qualifying record and 1.1s under the old race lap record.

Jason Gomersall had a strong day in his iSeek Racing Holden Torana SL/R 5000, third fastest overall today at a circuit where he has traditionally performed well in the past. Gomersall qualified 4th at Hidden Valley in 2013 and fifth last year with Bowe’s record pace today proving the pace of the Torana product at the 2.87km circuit just outside of Darwin.

Jim Richards was a competitive fourth overall in the Shannons Insurance AMC Javelin, just a fraction ahead of former Touring Car rival Glenn Seton’s Thunder Road Racing Team Ford Mustang Coupe and series leader Gavin Bullas’ Ford Mustang. Seton, however, may be unlikely to continue this weekend after a serious engine knock was noted in his Mustang post practice one – ruling him out of the second session and potentially the remainder of the weekend. The team will assess the issue overnight.

The day was notable for drivers finding the limits of adhesion on the new surface, some pushing too hard in their pursuit of speed. Tony Karanfilovski brought the second session to a slightly premature close when he hit the tyre barriers at turn 10, kissing the tyre bundle in his Ford Mustang. The Sydneysider expects to be back on track ahead of qualifying tomorrow.

Teams have also worked hard to fine tune their vehicles to suit the surface, a rush of final-drive gear ratio changes being undertaken between sessions as drivers chased top end speed on the long Darwin straight. The fastest TCM cars hit 262km/hr before braking for turn one.