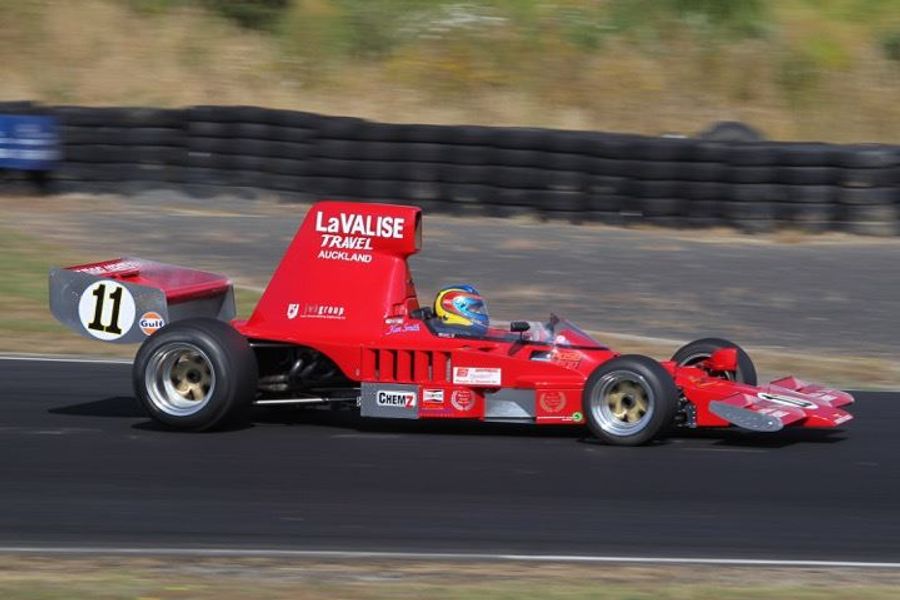 Long past the age when their contemporaries have hung up their helmets, New Zealand motor racing legend Ken Smith and his Australian counterpart, Alfie Costanzo, will resume their on-track rivalry at the 27th annual Phillip Island Classic Festival of Motorsport meeting this weekend (March 11th to the 13th). Both now 73-years of age, the pair will line up in five Formula 5000 races over the weekend – Smith in a 1976 Lola T332 and Costanzo in a 1970 McLaren M10B – amidst the huge 28-strong F5000 field.
With an unbroken career now spanning 58 consecutive national motor racing seasons at home in New Zealand, Smith, from Bombay south of Auckland, remains as quick and committed as ever and crosses the Tasman for the Phillip Island Classic meeting gunning for his fourth MSC NZ F5000 Tasman Cup Revival Series title. He is also a three-time winner both of the New Zealand Grand Prix and Lady Wigram Trophy race, as well as a two-time winner of the New Zealand Motor Cup.
Costanzo started later and ended his top-level career across the Tasman earlier than Smith. However in a career spanning 31 years he won the Australian Drivers' Championship title a record-equalling four-times (from 1980-1983) and - amongst a number of other achievements - finished second (with Alan Grice) in the Hardie-Ferodo 1000 at Bathurst in 1979.
Like Smith, Costanzo's career was at its peak in the transition between the big, booming stock-block 5-litre V8-powered Formula 5000s and the smaller, more nimble 2-litre 4-cylinder Formula Atlantic/Pacific single-seaters. That was also the time that Australia and New Zealand went their separate ways, replacing the combined 'Tasman' Series with independent series on either side of the Tasman.
As well as competing in the same categories, Smith and Costanzo also raced similar cars. Both enjoyed considerable success in Lola T332s and Lola T430s. In fact Smith made his F5000 category return in 2007 in HU1, the 1976 Lola T430 which Costanzo used to win the first of his four Australian Drivers Championship titles in 1980.
The McLaren M10B Costanzo is driving this weekend is equally storied, being only the second - 400-02 - M10B produced and having enjoyed a winning start to its life in Australia in the hands of local ace Neil Allen before being raced with further success by compatriot Kevin Bartlett.
Smith heads to Phillip Island as the man to beat in the ex Danny Ongais Lola T332 he owns with long-time crew chief Barry Miller. Young Australian driver Tom Tweedie (Chevron B24) gave the Kiwis a run for their money last time they crossed the Tasman for rounds of the MSC series. But Smith didn't make that trip and says that if Tweedie or anyone else thinks that he is an easy beat because of his age, they have another think coming.
Joking aside Smith not only continues to defy stereotypes about age and ageing, he also continues to raise the bar in terms of car preparation, pace and racecraft.
So, what keeps Smith going?
"First of all, I'm too young to retire…" he starts, "and second of all, I just love racing. You wouldn’t do it for 58 consecutive seasons if you didn't, would you?”
The F5000 races at this year’s ‘Classic’ are amongst the 60 events for a record 540 entries over the event’s three-day programme that commences with practice and qualifying on Friday morning and racing from 1.20pm that afternoon.
The Victorian Historic Racing Register is staging the 27th Phillip Island Classic Festival of Motorsport with continued support from Penrite, Shannons and CoolDrive and Repco.
Ken Smith Alfie Costanzo 27th annual Phillip Island Classic Festival of Motorsport Formula 5000 New Zealand