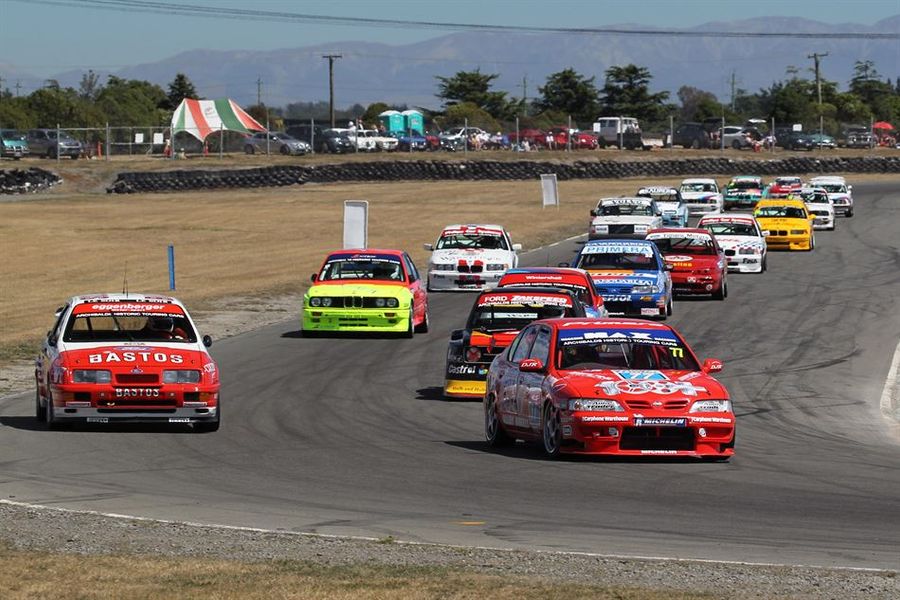 Photo credit: Fast Company/Alex Mitchell
Many Kiwi motor racing fans have fond memories of the televised British Touring Car Championship (BTCC) races beamed into their homes in the early 1990s. Drivers like Scot John Cleland, Frenchman Alain Menu, Italian Gabriele Tarquini, Brits Tim Harvey, Patrick Watts and Nigel Mansell, as well as New Zealand’s own Paul Radisich, became household names on the back of the spectacular racing of popular 2.0 litre family four-door saloon cars.
At the annual MG Classic meeting at Feilding’s Manfeild Circuit Chris Amon this weekend those lucky enough to be there will be able to see many of the very same cars on track courtesy members of New Zealand’s Historic Touring Car (NZ) Association.
The Association was set up in 2015 to promote the purchase and active use of various Touring Cars from the various categories which were run through the 1980s and  1990s. Included in this catch-all category are the two most familiar to Kiwi fans, Group A (1985-92) and Super Tourers (1992 to 2000).
The New Zealand Association now has over 50 active car-owning members and this summer is embarking on its first multi-round series which kicks off at the MG Classic meeting at Manfeild this weekend. Fans can expect to see a broad range of Super Tourer models, from the popular E30 and E36 BMW 3-series models to the later model Honda Accords, Nissan Primeras and Volvo S40s.
With interest in buying, where necessary restoring, then race preparing these well-loved and remembered racing cars at an all-time high, Association chairman Murray Sinclair says that the series is a timely addition to the programme at classic motor racing meetings around the county.
He expects full grids from this weekend’s opening series’ round and says that every week he hears of someone else either acquiring an interesting car, or in the process of tracking one down:
“It really was a fantastic era where companies were building cars on a cost-no-object basis. And we are very fortunate that many of the cars that were raced in period are still available for us to buy, bring back here and demonstrate in a competitive manner.”