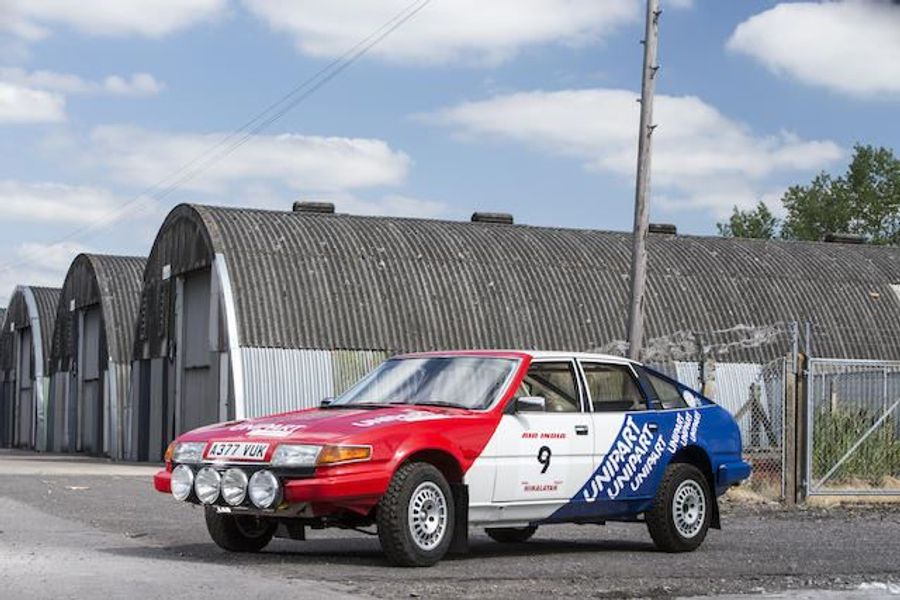 A trio of historic rally cars formerly owned by the late Philip Young will be auctioned by Bonhams at it’s Goodwood Revival sale on Saturday 10th of September, with viewing the day prior.
The three cars were used and enjoyed for up to thirty years by the founder of the Endurance Rally Association and historic rally movement, and represent a slice of British motorsport history.
Best associated with Young was his SD1 3500 A377VUK. One of two ex-works survivors from a cancelled long distance rally programme, the car was used in Group A racing and recce work by Tony Pond before being left in Dubai, including a televised Rallysprint at Donington Park. Following a brief spell with Del Lines, the car was bought by Unipart for Young to campaign in the 1986 Himalayan Rally, an event in which he and the car came tenth overall following a broken track control arm; a failure which cost them second place. Restored during the mid 1990s, Young bought the car for his own collection in the late 1990s. It is to be sold in full working order, and the guide price is £40-60000.
A TR7 V8 built as an evocation of Tony Pond's 1980 Ypres-winning car will also be listed from Young’s collection. Built at a cost of £110,000. 'EAT 400T' has competed in multiple historic rally events, including the 2014 Roger Albert Clarke Memorial Rally (car number 21). A recent engine rebuild by John Eales ensures the engine is more than ready to race again, though the car will need completing before it is used. A number of Group 4 Ford Escort parts were used in the conversion from road car to rally car, including suspension, brakes, hubs, and wheels. The car comes with all parts required to complete, and a space LT77 gearbox with a straight cut close ex works gear set, and at a guide price of £20-30000.
Another acquisition from the collection was UJY747V, a Vauxhall Chevette HS in road specification. It has had a fully documented engine rebuild and complete respray, making it cosmetically one of the best Chevette HS left and in excellent mechanical condition too. Bought in February 2014, Young had scant time to enjoy the car prior to his untimely death in March 2015. Since then all three of his cars have been in professional storage. With a guide price of £16-20000, this is a tempting way into rally homologation ownership.
When it came to historic rallying, Young made it his business to do what others said could not be done. The Endurance Rally Association, a motoring club, was founded by Young to handle the Pirelli Classic Marathon as the momentum grew. More events followed including the longest-ever rally organised, the Around the World in 80 Days, held to mark the Millennium in 2000, and the revival of the Peking to Paris Motor Challenge.
With a successful track record of over 65 major international events behind it, the ERA attracts entrants from all over the world and vehicles spanning over 85 years of motoring heritage.
Bonhams Endurance Rally Association historic rally cars Philip Young auctioned Goodwood Revival

Tickets Now on Sale for All Days of RAC Rally