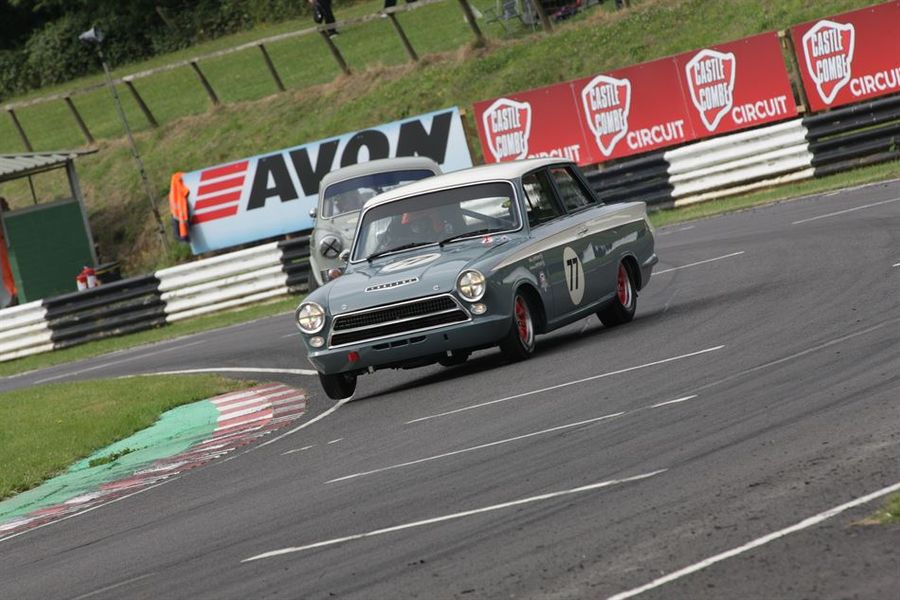 Photo: Tim Crisp
There were  two days of race action at Castle Combe in Wiltshire last weekend, with a strong historic element in Sunday’s racing.
Closing the morning’s race action was a field of Jaguars contesting the 30-minute HRDC Coombs Heritage Challenge. The Mk2 of Peter Dorlin took the win, almost six seconds clear of the 1958 Mk1 of Richard Butterfield.
Once the race HRDC Allstars Race started, circuit PR man, John Moon from Bath got away well in his Lenham GT, heading pole man Steve Jones from Wells in the Mini and the rest of the pack for the next lap and a half. Moon kept the nimble Mini in sight for the next 20-minutes but after his alternator warning light came on he backed off, initially dropping to third but recovering to take second.
Former AC/DC front man Brian Johnson in a Mini similar to that of Jones claimed tenth overall, whilst Chris Rea was 17th in his Morris Minor, liveried to resemble a police car.
In the 45-minute HRDC's Coy's Trophy race which featured pit stops and driver changes, it was British Touring Car Championship driver Andrew Jordan who dominated, taking a clear win in the sole Lotus Cortina in the field  shared with father Mike.
Bristol driver Michael Squire headed the Cortina at times, but eventually finished second in his Mustang, the only other car on the lead lap. Third was Andy Edwards in his might Ford Falcon, two laps down on the lead pair.