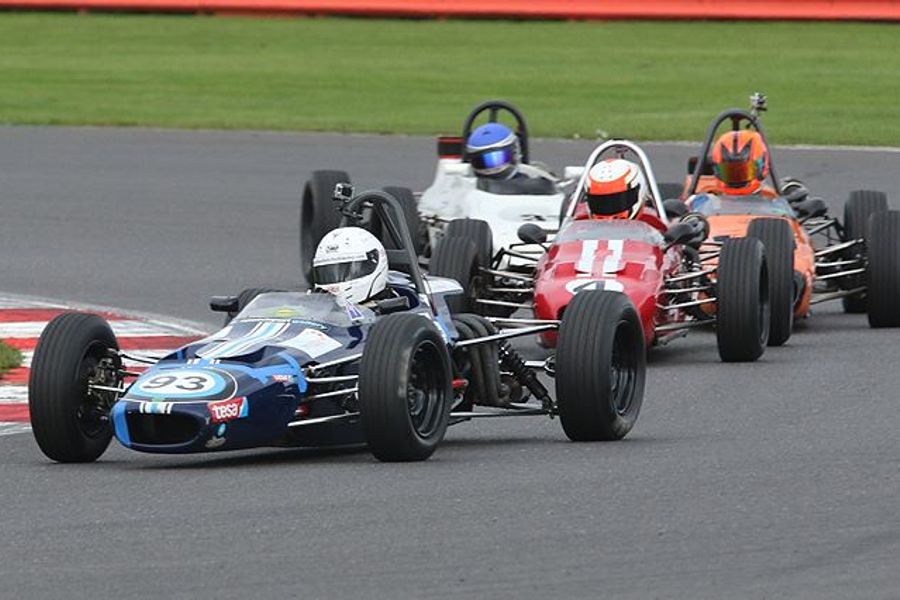 The 50th anniversary season of the Historic Sports Car Club will start in style at Castle Combe this weekend (16th and 17th of April). Alongside a full weekend of HSCC racing at the Wiltshire track, the grid from the first Griffiths Formula race for sports cars from 1945 to 1955 will be reformed using as many of the original cars as possible.
Eleven HSCC categories and more than 280 cars will start their 2016 racing season over the weekend in front of what is sure to be a typically large and enthusiastic Castle Combe crowd. The HSCC races will be filmed for a special TV programme on Motors TV, to be broadcast on Saturday 21 May.
A fabulous 40-car field for the 40-minute Guards Trophy race is packed with quality and heading the entry is the hugely successful Chevron B6 of Michael Schryver and Simon Hadfield. Another eight B6s/B8s will make a glorious sight in the capable hands of drivers like Philip Nelson, Charles Allison, Hugh Colman, Daryl Taylor, local ace David Smithies and Greg Thornton. From the GT ranks comes the mighty TVR Griffith of Mike Gardiner, backed up by the similar cars of John Spiers and TVR newcomer Peter Thompson.
Another highlight will be the opening round of the HSCC Historic Formula Ford 1600 Championship. With well over 40 entries, two races will be run to ensure everyone gets a place on the grid.
Pacesetters include former champions Westie Mitchell and Callum Grant, while former F3000 racer Mark Shaw and Ben Tusting are two of the recent and rapid converts to HFF1600. TV presenter and former F1 racer Tiff Needell needs no introduction, while race car preparers Will Nuthall and Dan Eagling are both very accomplished racers.
The fans at Quarry, in particular, are in for a real treat in the opening round of the ByBox Historic Touring Car Championship on Saturday afternoon. Heading the V8 brigade is ex-pat New Zealander Warren Briggs in his potent Ford Mustang and he will be tough to beat despite limited prior circuit experience. Lining up against Briggs will be the Mustangs of Peter Hallford and Greg Thornton and the Ford Falcon of local driver Chris Clarkson.
Chris Sanders, another local racer, Oliver Ford and John Spiers head the Lotus Cortina pack while a horde of rapid Minis and Hillman Imps include former category champions Simon Benoy, Roger Godfrey and Adrian Oliver.
Two races are for the opening round of the Silverline Historic Formula Junior Championship, with former champion Andrew Tart and 1960s F3 ace Mike Walker heading the front-engined field in their front-wheel drive Bonds.
In the race for rear-engined cars are Lotuses for Nick Fennell and Gregory Thornton, while the rising star of the Brabham camp is Cameron Jackson (BT2). Top of the Cooper pack could be Steve Jones (T67) while rapid interlopers are Stuart Roach (Alexis MK4) and Alex Morton in the Lightning Envoyette.
A gaggle of quick cars and drivers head the Classic Formula 3 entry, including Richard Trott who raced in F3 in the early 1980s as a rising young star. Trott will field his ex-Siegfried Stohr Chevron B43, while Keith White races his ex-Elio de Angelis Ralt RT1.
Set to start this special weekend in style is the opening round of the HSCC 70s Road Sports Championship, with a fabulous field of more than 30 cars. The Lotus Europa has regularly been the car to beat and there will be five of them on one grid. Current champion James Dean heads a pack that includes former champion Oliver Ford, category convert Howard Payne and the rapid James Dodd.
Getting Sunday’s race programme off to a cracking start will be the opening round of the HSCC Historic Road Sports Championship. At the head of the action will be the mighty Morgan Plus 8s of Kevin Kivlochan, the reigning champion and marque expert Richard Plant. Taking the fight to the Morgans will be the fastest of the Lotus Elans for Patrick Ward-Booth, Peter Shaw and Frazer Gibney.
Bristol-based vet Nelson Rowe (Reynard SF79) is the benchmark for the Historic Formula Ford 2000 Championship, but can expect opposition from drivers like Cumbrian Andrew Park (Reynard SF81) and Lee Bankhurst (Royale RP30).
Wrapping up a fine weekend of racing will be races for the Historic Formula 3 Championship, home to the wonderful 1-litre cars of the late 1960s, the Classic Clubmans Championship and the Classic Racing Car Series.
Castle Combe Historic Sports Car Club Griffiths Formula