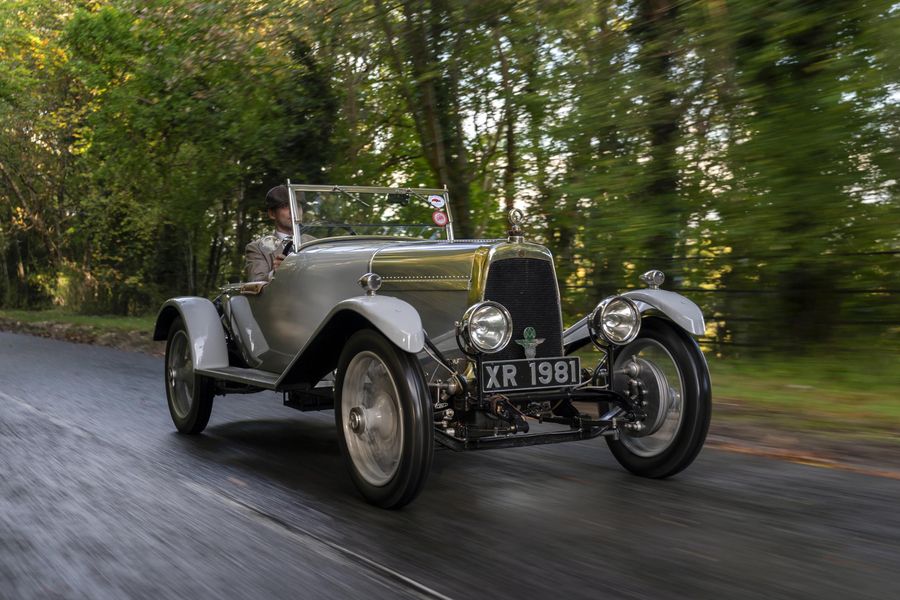 It was 95 years ago that the car which came to be known as ‘Cloverleaf’, XR 1981, lined up at the bottom of Aston Hill. One of just eight customer cars built in late 1923, this very early Aston Martin was competing against two Bugattis and two other Aston Martins – one of which had been entered by the company’s founder, Lionel Martin, who won the trophy on the day.

This four cylinder 1,486 cc side-valve engined 1923 long-chassis ‘Cloverleaf’-bodied tourer came second at the event, and remains one of only two Bamford and Martin-built Aston Martins from that meeting in 1924 still in existence today.

To mark the anniversary of its first competitive outing ‘Cloverleaf’ returned to Aston Hill to be driven by Aston Martin Racing ace and three time Le Mans class winner Darren Turner, followed closely by a Bugatti, to recreate as accurately as possible the events of almost a century ago. The car was painstakingly prepared for its hillclimb return by renowned specialists Ecurie Bertelli, the Midlands-based firm which currently manages the vehicle on behalf of its owner.

Aston Hill is, of course, an evocative place for every Aston Martin enthusiast since it is nothing less than the inspiration behind the name of the company – Aston Martin – which combines the name of this famous hillclimb with the surname of one of the business’s founders. Far more than just a namesake, though, Aston Hill was the venue for many defining moments in the early years of the brand with Lionel Martin driving his home-tuned Singer specials and later cars of his own design up the hill, cementing a lasting ethos of sporting performance for the great British brand.

Built in late 1923, chassis 1926 is one of the oldest road-going Aston Martins still in existence and had an open body design known as a Cloverleaf, because the two front seats and one rear seat behind created the shape of a three-leaf clover.

Built at Aston Martin’s second home, 53 Abingdon Road, Kensington, this car, now known affectionately simply as ‘Cloverleaf’, is a stunning example of the very earliest Aston Martins and continued in active competition until the late 1960s. Featuring front wheel brakes, a rare feature in the 1920s, and a top speed guaranteed to be in excess of 72 mph Cloverleaf’s 38 bhp power peak is channelled to the driven wheels via a four-speed gearbox.

Paul Spires, President of Aston Martin Works, said of the anniversary run: “There are not many brands that are fortunate enough to have as many iconic milestones as Aston Martin. Cloverleaf is a perfect example of how, even from the brand’s inauguration, we were racing and competing at the highest level in terms of design and innovation.”

Cloverleaf ran up Aston Hill and came second in the Herts Automobile and Aero Club Hillclimb in 1924. The model was one of a team of three Aston Martins competing on the day.