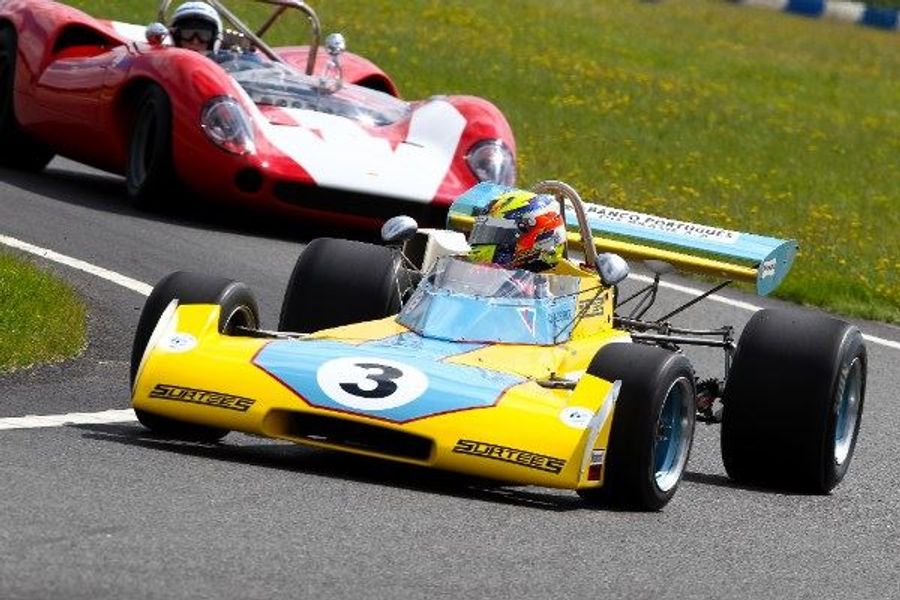 The Henry Surtees Foundation’s have a fundraising auction on Tuesday 11th July 2017 at Mercedes-Benz World in Surrey. The event includes a champagne reception hosted by Steve Rider and Henry Hope-Frost with special guest interviews plus a fundraising auction by Malcolm Barber of Bonhams, as well as a displayed demonstration of cars and motorcycles associated with John Surtees that is open to the public.
Auction lots include signed artwork and memorabilia from an exclusive Omologato watch, No 1 of a limited edition range that has been designed in collaboration with the Surtees Family to a pair of Sebastian Vettel’s 2016 racing gloves. There’s also a great selection of behind-the-scenes factory tours from Red Bull Racing and Mercedes AMG Petronas F1 Teams to even the loan of a Ferrari California T for a weekend! Tickets to the event cost £70 and can be purchased via www.henrysurteesfoundation.com
The 2017 event is set to be the highest profile event yet and will feature a special tribute to the charity’s founder, John Surtees CBE, who sadly passed away earlier this year. Last year it raised over £58,000 for the Henry Surtees Foundation which was established by John, following the tragic death of his son Henry.
Features of the day include:
Henry Surtees Foundation Karting Challenge - During the daytime 130-competitors from the world of motorsport, business to members of the public will battle it out in a two hour endurance charity karting race each hoping to secure the prestigious 'H' trophy.
Free Exhibition to honour John Surtees CBE - The day coincides with a special John Surtees themed exhibition at Mercedes-Benz World. The exhibition will be open daily from 1st June – 31 August inclusive, and is FREE to visit.  On display:-
TS 14 – 04 – Team Surtees car, one of the first to be constructed with the new crushable structure safety regulations introduced in 1973.  The car was raced by Mike Hailwood and Carlos Pace setting lap records in the German and Austrian Grand Prix and second in the 1972 Italian Grand Prix.
Vincent Black Lightning - John Surtees built the engine originally in 1953 using some parts from his father’s 1949 Black Lightning.
1953 500cc Works Norton - This Works Norton is one of the last works machines built by the original Norton Company in the early Sixties and features an ultra-short-stroke engine of 86mm x 60mm and outside flywheel.
At 2.00pm John Surtees Tribute (FREE to spectate) – During the karting interval, celebrity drivers and riders will take to the Mercedes-Benz track for a spectacular demonstration of Surtees vehicles (both two and four wheels) to honour John Surtees. Vehicles include:-
John Surtees Road and Race Cars:
TS7 - The first Formula 1 car built by Team Surtees at its Edenbridge base, which John Surtees raced at the British Grand Prix in Brands Hatch in 1970.
TS10 - The Surtees TS10 Formula 2 car designed and built by the Surtees team in Edenbridge. John Surtees won the Japanese Grand Prix and Imola Gold Cup in 1972 and the Japanese Grand Prix.
TS15 - The 2-litre Formula 2 Surtees car built in 1973 which finished 2nd in that Championship, this car is the prototype that won the prestigious Interlagos race in Brazil driven by Carlos Pace
TS19 -The Surtees TS19 Formula One car was a new design from the Edenbridge Team.  A new young driver, Alan Jones, was given the opportunity to drive.  He finished 2nd first time out at Brands Hatch to the World Champion James Hunt.  He then followed with 5th place in the British and Belgium Grand Prix, and 4th place in the Japanese Grand Prix. Surtees chose a controversial sponsorship deal with Durex condoms which went on to win an advertising award.
Lola T70 to commemorate John Surtees winning the inaugural Canadian-American Sports Car Championship in 1966; it was Lola Cars greatest success in their eight year history.
John Surtees Motorcycles:
1960 MV Agusta four-cylinder GP motorcycle – John Surtees won seven motorcycle championships riding for MV Agusta and 6 Isle of Man TT’s
F Norton 500cc Experimental Prototype – John purchased the remains of this bike in 1992, working with the former Chief Mechanic of the Norton works team, Charlie Edwards the pair scoured the country to locate original parts.  They were fortunate to find the unique trailing link front forks that the bike was tested with and a number of other parts.  They worked closely together to make sure they got the restoration right.  In 1998 the machine was finally started up and John ran it for the first time at the Goodwood Festival of Speed.
The 1949 500cc Vincent Grey Flash, the motorcycle on which John Surtees won his first ever race and considered it the most important race of his life. John Surtees built the Vincent Grey Flash motorcycle in 1979 using a large number of parts from the original machine that he built in 1950 whilst working as an apprentice at the Vincent Company. It was the first of many wins before he transferred to a Norton to compete in International events.
1959 350cc Manx Norton R.Petty Special – Ray Petty was a noted tuner and preparer of Manx Nortons. This machine has shorter stroke engine to standard, Ray copied the 78mm x 73mm Bore & Stroke of the Joe Craig Works Nortons of 1954.
Members of public are encouraged to attend the daytime event which is FREE to spectate, and provides a great opportunity to explore the impressive Mercedes-Benz World visitor attraction featuring interactive displays, racing simulators and motorsport exhibits.