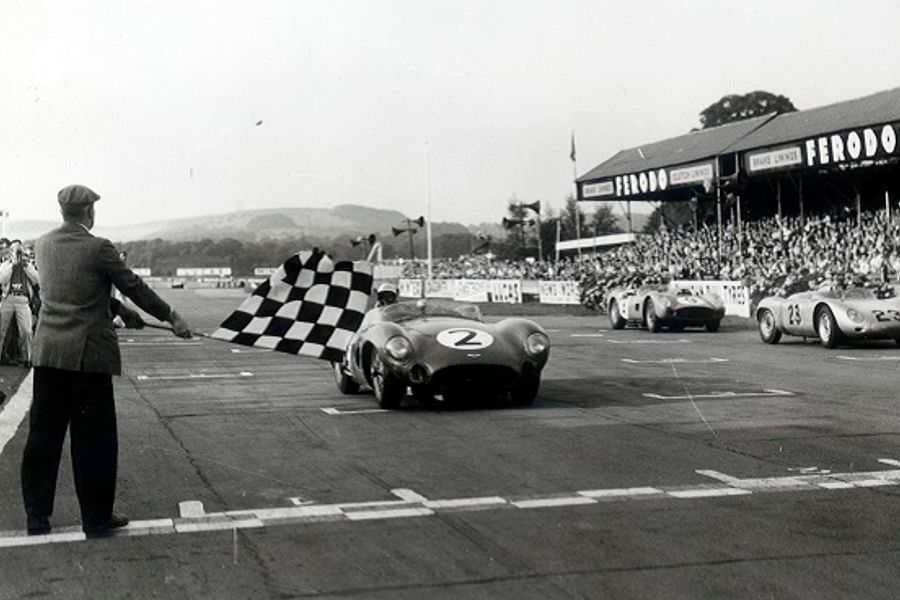 The Lavant Cup race at the 1949 Goodwood Easter Meeting was held over five laps, and marked Aston Martin’s first Goodwood appearance, with W G Bingley finishing in tenth position aboard his Aston Martin. Little did Bingley know that 10 years later, Aston Martin would achieve its greatest success on the same circuit.

The 1959 World Sportscar Championship RAC TT at Goodwood was the title-deciding race of that year’s championship. Ferrari had won at Sebring, Porsche had mastered the Targa Florio, and Aston Martin had been victorious in both the 1000km race at the Nürburgring and the Le Mans 24 Hours. Disaster struck for Aston Martin, though, when Roy Salvadori and Stirling Moss’s race-leading car was set on fire in the pits during the first pitstop. Moss was swiftly put into the third Aston Martin DBR1 of Carroll Shelby and Jack Fairman. The trio went on to beat the Porsche 718 RSK of Wolfgang von Trips and Jo Bonnier by a lap, sealing the 1959 championship.

This was by no means Aston Martin’s first success at Goodwood – the British manufacturer had completed a clean sweep of the legendary Nine Hour races in 1952 with the DB3, and ’53 and ’55 with the DB3S. The relationship continued into the early 1960s with the beautiful Aston Martin DB4 GT Zagato.

More recently, Aston Martin has been a stalwart of the Goodwood Festival of Speed, and many of the manufacturer’s most important cars have run up the Hill, from its Le Mans-winning DBR9 to the DBR1 that won the aforementioned TT in 1959. There will, of course, be a class of Aston Martin’s most important racing cars that will take to the Hill at the 2019 Festival of Speed, while the Supercar Run will display a cross section of the company’s current range of road cars. One of the classes in the Cartier ‘Style et Luxe’ concours d’Elegance will be dedicated to cars powered by the legendary Tadek Marek-designed Aston Martin V8 engine, which made its debut 50 years ago, in 1969.

The Central Feature will once again be designed by Gerry Judah – a task he has undertaken since 1997 when the sculpture featured a Ferrari F310 Formula 1 car hanging from an Italian arch, a relatively understated affair in comparison to more recent Central Features. While this will be the first Central Feature to celebrate Aston Martin, the marque did take pride of place at the first Festival of Speed in 1993. That year, the brand-new DB7, that was yet to be put into production, was displayed outside the House where the Central Feature sits today.

"It's absolutely wonderful that Aston Martin will star for the first time on the Central Feature at this year's Festival of Speed, presented by Mastercard,” commented the Duke of Richmond. “Seventy years ago, Aston Martin first raced at Goodwood and, 10 years later, our histories were forever linked when it sealed the 1959 World Sportscar Championship here at Goodwood Circuit in September that year.

“It was also the year that Aston Martin launched its works at Newport Pagnell – 2019 is a perfect time for us to celebrate Aston Martin's past, present and future success. The Central Feature looks set to be one of the most dramatic yet, and a fitting landmark to the past century of Aston Martin success."