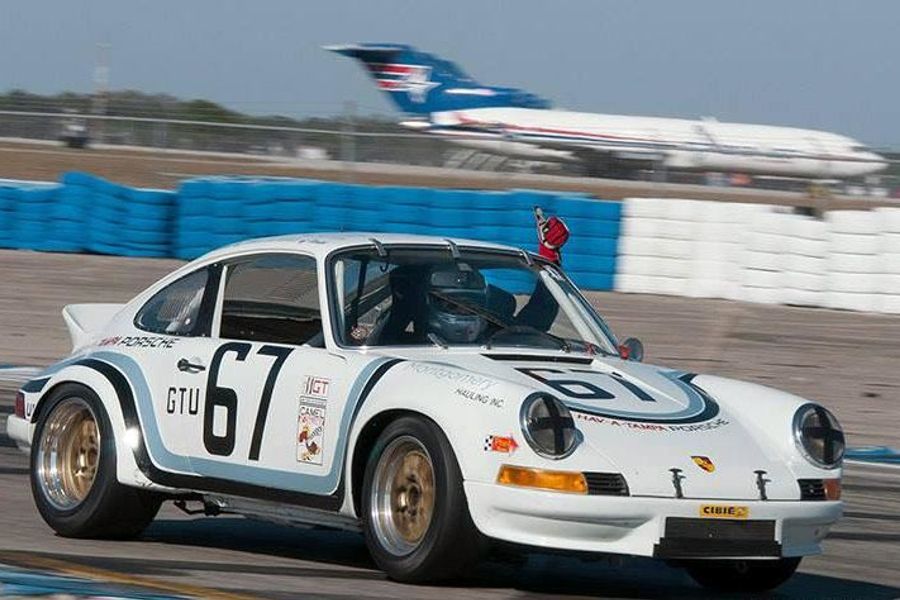 The 2018 Historic Sportscar Racing (HSR) season got underway on the hallowed ground of Sebring International Raceway last week with a pair of HSR WeatherTech Sprint races in support of the 66th running of the IMSA WeatherTech SportsCar Championship Mobil 1 Twelve Hours of Sebring.

A doubleheader schedule of Wednesday and Thursday HSR WeatherTech Sprints featured two full classes of race cars - Historic and Vintage - sharing the track in each race.

Wednesday's opening sprint at 4:30 p.m. was the first official race of the 66th Sebring 12 Hour weekend and moved the entire event off to a competitive start. Rokket Horton scored overall and Historic-class honors in his 2001 No. 25 Porsche 996 GT3 Cup while Scott Tyler won the Vintage class in the Danny Stewart-owned 1970 No. 67 Porsche 911 RSR.

Stewart's winning ride pays tribute to the late Dave White, a good friend to many Porsche owners in Tampa who also ran and was the lead instructor at the Akin-White Racing School in the 1980s. He was a top IMSA Camel GT driver in the 1970s and won the 1978 IMSA GTU Championship in a car almost identical to the one Tyler drove to victory at Sebring.

Horton shared the overall and Historic podium in the first race with runner-up Henri Sicotte and his 2010 No. 88 Camaro GT.R prepared by GT Racing and third-place finisher Andrew Uzarowski in his 2011 No. 12 Porsche 997 GT3 Cup.

Tyler was joined on the Wednesday race Vintage-class podium by Fred Schulte, who finished second in his 1973 No. 31 Porsche 911 IROC, and Russell Gee who took third at the wheel of his 1963 No. 52 Jaguar E Type. Both entries are prepared by Heritage Motorsports.

The oldest race car competing at Sebring last weekend in any class, Gee's 55-year-old Jaguar looks as good as it sounds. A built-for-racing "lightweight" original, the silver Jaguar also had more than enough speed to mix it up with machines as much as 45 years newer than this quick cat on the Sebring track.

Gee put the speed to good use in Thursday's night sprint, scoring the Vintage class victory in the Jaguar after the third-place showing the day before.

Schulte went two-for-two at Sebring with second-place Vintage-class finishes in both races while Steve Piantieri, driving his 1965 No. 95 Ford Mustang 2+2, joined him and Gee on the Thursday podium after finishing third.

Sicotte also improved his podium position in the Thursday night race, taking Historic-class and overall race honors in the Camaro. He and Horton made it an even swap of podium spots between the races, with "The Rokket" finishing second to Sicotte Thursday after winning the Wednesday opener.

Sicotte's quick Camaro finally made it to victory lane at Sebring after never having the chance to compete in the 12 Hour in its prime. A winning entry in the old GRAND-AM Rolex SportsCar Series, the GT-class Camaro still sports the same livery as when it was driven to victories in its glory days by drivers such as Bill Lester and reigning IMSA WeatherTech Prototype Champion Jordan Taylor.

Third-place in Historics in the Thursday night race went to Austin Armellini in his 1992 No. 6 Shelby Can-Am. Armellini is a longtime HSR member who is making a welcome return to racing this year after missing a few seasons.

The HSR presence in Sebring didn't stop when Thursday's checkered flag waved. The HSR cadre, which paraded to and from Sebring International Raceway, was the feature attraction at Friday's Circle of Speed 2018, which marked the return of Historic Sportscar Racing cars to Downtown Sebring. The HSR race cars were on display at Downtown Sebring's Circle Park Square through that day's lunch hours before the procession was escorted back to the track later on Friday afternoon.

Next up for HSR is the 41st Annual Classic Motorsports Mitty presented by Hagerty at Road Atlanta, April 26 - 29.