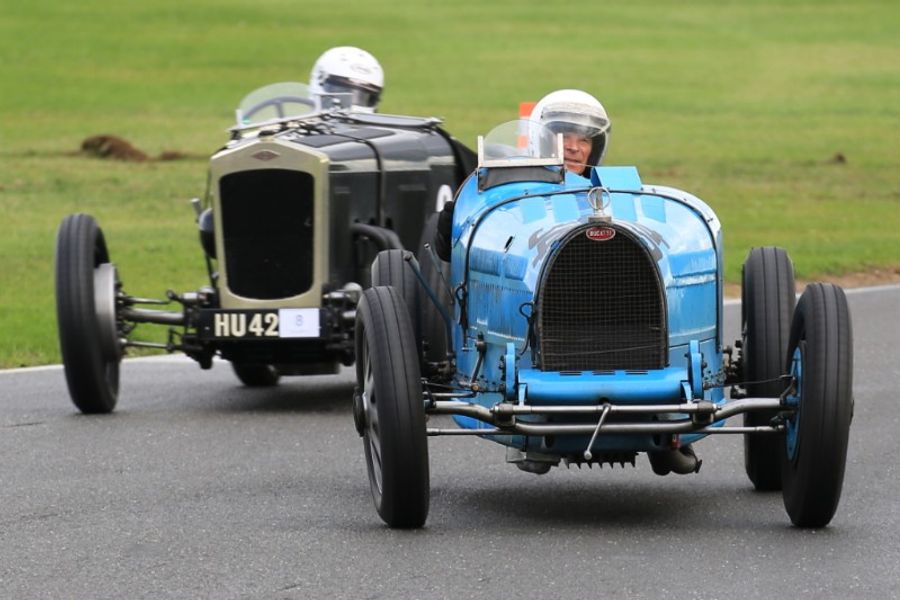 Saturday 22nd and Sunday 23rd September saw the Vintage Sports-Car Club returned to Snetterton Circuit in Norfolk,the weekend commencing with the penultimate round of the Club’s Speed Championship, the Snetterton Sprint; followed by Sunday’s season finale of the 2018 Formula Vintage series.

Saturday saw cold but dry weather conditions, and over 60 competitors took to the Snetterton 100 circuit for the Sprint. It was Julian Grimwade and his 1934 Frazer Nash Single Seat that triumphed with Fastest Time of the Day, with a quickest in a time of 111.48 seconds.

The award for the Fastest Vintage of the Day went to Nick Leston in his 1929 Lovell Elkhart Sprint Racer, and the Fastest Young Driver was Tom Waterfield in his 1929 Frazer Nash Super Sports.

Sunday’s wet and windy conditions were less than ideal, but the competitors persevered for the final Formula Vintage race day of 2018.

Races included the the Redgate Mug which was won by Christopher Mann in his 1932 Alfa Romeo Monza; the Historic Seaman won by Gareth Burnett and his Alta 2 Litre; the Flockhart Trophy won by Simon Diffey in his 1955 Connaught B Type; and the Vintage Seaman Trophy won by Julian Majzub in his 1927 Bugatti Type 35B. Majzub was also awarded the prestigious Williams Trophy for the fastest Bugatti in Race 6, originally awarded to British driver William-Grover Williams at the first ever Monaco Grand Prix in 1929.

The Mike Stripe Team Race was an exciting highlight of the day with nine teams going head to head to be the best trio on track. The winning team on scratch was the Survivors consisting of Jo Blakeney-Edwards and her 1929 Frazer Nash Super Sports, Dougal Cawley and his 1929 GN/Ford Piglet, and Jeremy Brewster and his 1928 Frazer Nash Geoghegan Special. Team Pip, Squeak and Wilfred represented one of four MG teams in the race, consisting of Fred Boothby and his 1933 MG J2, Hamish McNinch and his 1935 MG PA, and Chris Cadman in his 1931 MG Montlhery Midget.

Whilst the VSCC’s Formula Vintage Race Series has now drawn to a close this year, the series will be back next year for another series of thrilling Race Meetings, including a trip to Brands Hatch for the VSCC’s 85th International Anniversary Celebrations.

The next and final Round of the 2018 Speed Championship will take place on Saturday 29th September in the form of the Prescott Long Course Hill Climb.