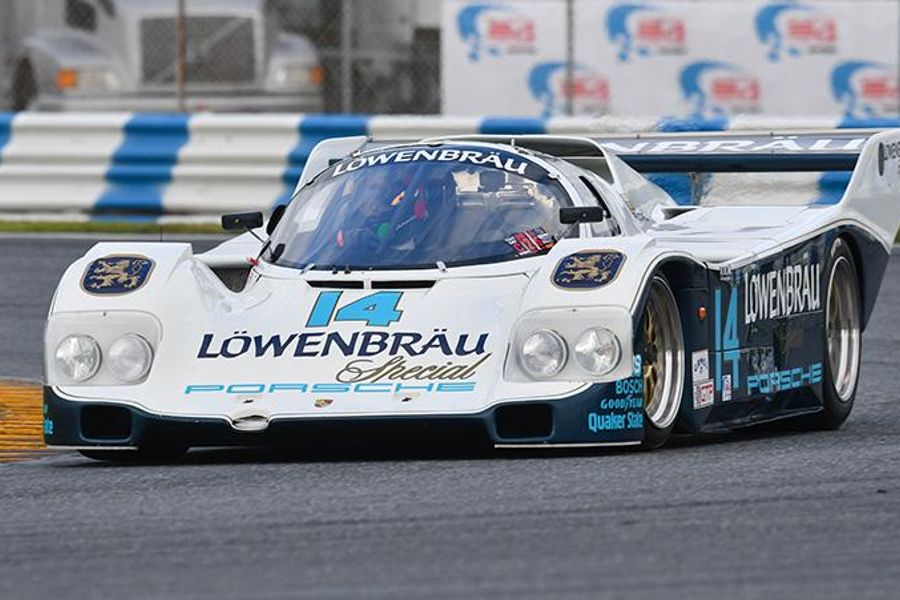 Historic Sportscar Racing (HSR) competitors and their classic race cars are well represented on the invitation-only list of participants in the Rolex 24 At Daytona Heritage Exhibition 2020, a featured part of pre-race ceremonies for this weekend's 58th Rolex 24 At Daytona IMSA WeatherTech SportsCar Championship race at Daytona International Speedway (DIS), January 25 - 26.

More than half of the Rolex 24 Heritage Exhibition's 28 participants have longstanding and race-winning ties to HSR, but one legendary entry is a clear standout even in this illustrious group.

Rodrigo Sales (collage below, lower left) and Gunnar Racing bring the iconic Al Holbert 1985 No. 14 Holbert Racing Lowenbrau Special Porsche 962 HR1 Back to DIS after a recent victory in the HSR Classic Daytona presented by IMSA in November.

While HR1 owner Sales is set to drive in the Rolex 24 Exhibition, it was his teammate Derek Bell - the now 78-year-old legend who was one of Holbert Racing's original driving stars - who drove the No. 14 Porsche 962 to the finish line for the HSR Classic Daytona Group C victory. The win came 30 years after Bell's last overall Rolex 24 At Daytona win in another Porsche 962 in 1989. 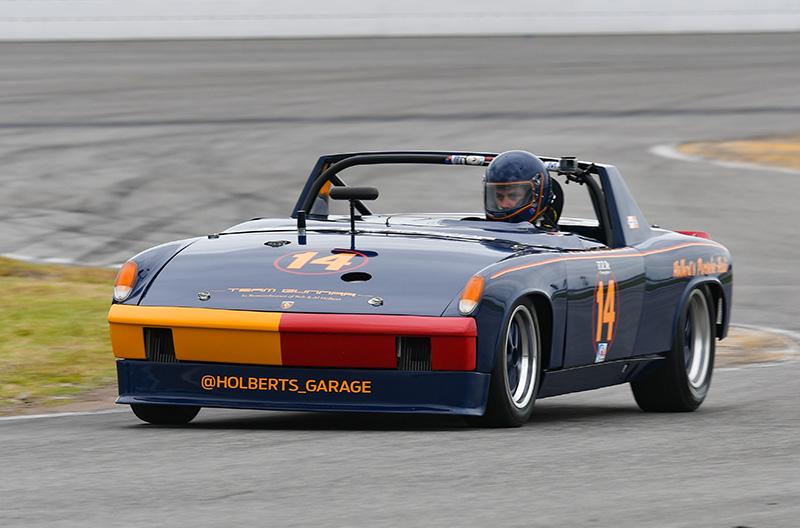 Gunnar Racing fields a full stable of cars for the Rolex 24 Exhibition, including two more Porsches carrying the legacy and livery of the famous Holbert Racing machines. The lineup includes a 1973 No. 14 Porsche 914/6 (above) adorned in the traditional Holbert Racing blue with red and yellow stripes. The 914 will be driven by Todd Holbert, Al Holbert's son, who also drove the car in November's HSR Daytona Historics.

The other Gunnar entry certain to be popular is a 1985 No. 14 Porsche 944 (collage below, lower right) carrying the same Lowenbrau livery of the HR1. Jennifer Malacarne drives the 944 in the Rolex 24 Exhibition.

Rolex 24 At Daytona race-winning team owner Alex Job - who was also an accomplished driver early in his career - returns to the wheel at the "World Center of Racing" as a guest driver in the Rolex 24 Exhibition. Job (collage below, upper right) drives a 1995 No. 56 Porsche 911 GT2 owned by Theo Ruijgh.

Fans of big-bore American iron will have several HSR regulars to follow in the Rolex 24 Heritage Exhibition.

Darek Stennes (collage above, upper left) brings his 1965 No. 65 Shelby GT-350 back to Daytona where the Mustang has been competing for more than 40 years. 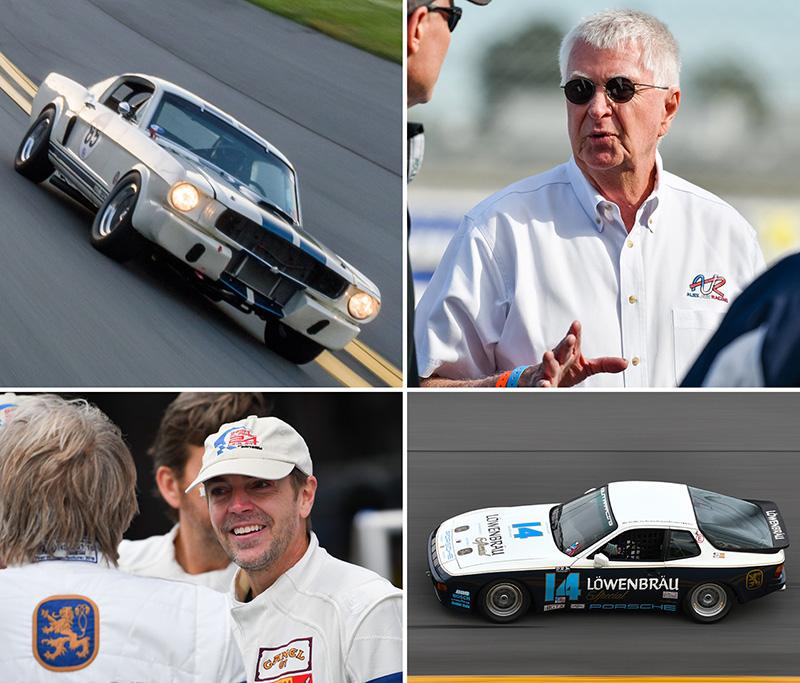 Canadian driver Henri Sicotte has won several HSR championships in his ex-Autohaus 2010 No. 88 Chevrolet Camaro GT.R that he and GT Racing bring to Daytona for the Rolex 24 Exhibition. The Camaro was among the first rides Jordan Taylor had at Daytona, and the current Team Corvette factory driver co-drove the No. 88 in Rolex 24 GT class competition in 2011 and 2012.

Two-time Rolex 24 At Daytona GT-class winners Alegra Motorsports bring a pair of standout Porsches of their own to the Rolex 24 Exhibition.

Team owner Carlos de Quesada drives a 1988 No. 16 Porsche 962 (below) campaigned in its prime by Dyson Racing. The 962 made three Rolex 24 starts at Daytona in the 1990s and was driven to victory in the 1990 World Challenge of Tampa IMSA Camel GT race. 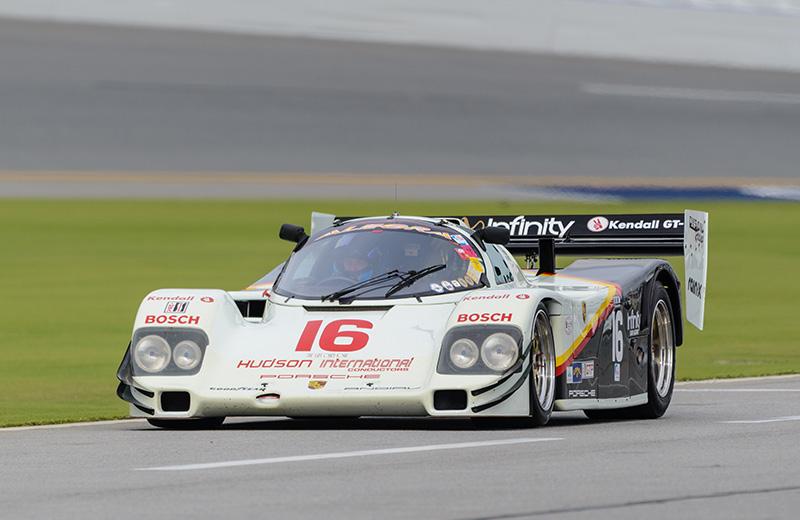 Alegra's other entry will be driven by Scooter Gabel, who joined de Quesada as a winning co-driver with team in GT at the Rolex 24 in 2007. Gabel's Rolex 24 Exhibition ride is the one-off GT-class 1988 No. 91 Porsche 944 GTR.

Another multiple HSR champion participating in the Rolex 24 Exhibition is Don Ondrejcak in his ex-TRG 2007 No. 65 Porsche 997.1 GT3 Cup (below).

Ondrejcak drove the Porsche to a trio of HSR titles in 2019, including taking home a pair of HSR-edition B.R.M. Chronographes for winning the B.R.M. Endurance Challenge GT Modern (GTM) championship and the HSR Global GT title for the second time. He also won last year's HSR WeatherTech Sprint Group 10 championship.

Rolex 24 Heritage cars will be loaded into the DIS FanZone on Friday, January 24, and take to the 3.56-mile road course Saturday at 10 a.m. for the tribute 24-minute exhibition that is a featured part of Rolex 24 pre-race ceremonies.

The HSR Classic Daytona presented by IMSA returns to the "World Center of Racing" for the sixth running of the classic 24-hour race this November, 4 - 8.