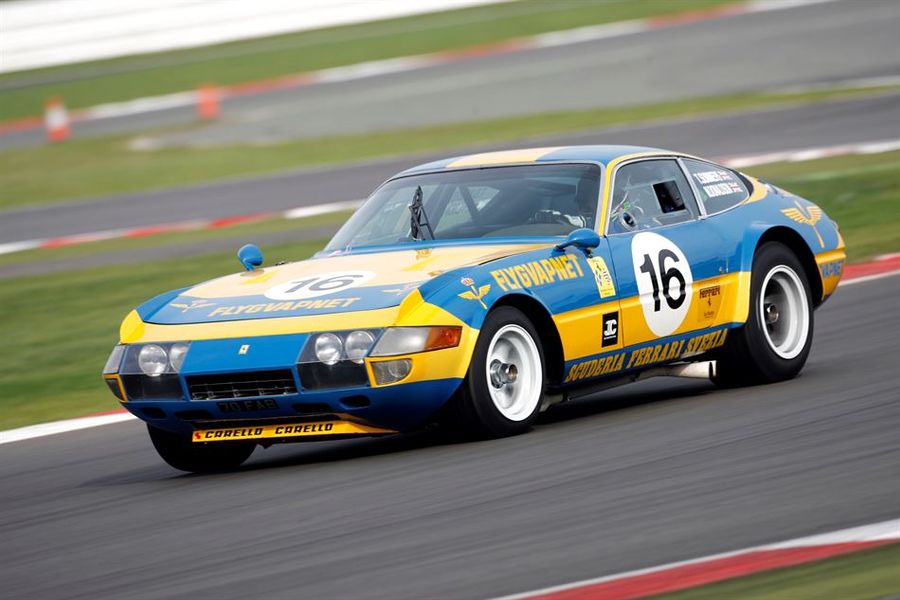 In an exciting new homage, this summer’s Silverstone Classic (20th-22nd July) will honour the famous 24 Hours of Daytona with Saturday evening’s three retro sports car showdowns all celebrating the history of America’s legendary endurance race under the ‘Daytona at Dusk’ banner.

Daytona has been synonymous with motor sport for more than a century with many of the early World Land Speed records achieved on the hard-packed white sandy Florida shores. It was on Daytona Beach in 1927 that Sir Henry Segrave became the first man to break the 200mph barrier and where Sir Malcolm Campbell set no fewer than five of his records, finally raising the bar to an eye-opening 276.82mph in his mighty 36.7-litre Bluebird in 1935 before moving to the grippier Salt Flats of Bonneville.

Fuelled by this lust for speed, those in Daytona started wheel-to-wheel racing on a beach road course during the 1930s and the popular sand-packed oval circuit hosted the very first NASCAR organised stock car race in 1948.

To cope with ever increasing crowds, during the fifties a paved 2.5-mile tri-oval superspeedway was built a couple of miles inland on empty ground adjoining the airport. Called the Daytona International Speedway, the new venue hosted its inaugural Daytona 500 NASCAR event in 1959 as well as regular sports car showdowns on a different configuration that featured parts of the banking as well as road circuit style in-field sections.

Then, in 1966, a 24-hour sports car race was introduced – a day-night-day event which quickly established itself alongside the 24 Hours of Le Mans and Sebring 12-Hours as a member of endurance racing’s coveted Triple Crown.

Over the 50+ years since then, most of the greats have won the 24 Hours of Daytona with multiple winners including Pedro Rodrígues, Brian Redman, Bob Wollek, Andy Wallace, Derek Bell, A.J. Foyt, Al Unser Jr., Rolf Stommelen, Hurley Haywood and Juan Pablo Montoya.

It is little surprise, too, that many of the great endurance sports cars raced over the ages are still competing at the Silverstone Classic, the world’s biggest historic motor racing festival. Now, in a special ‘Daytona at Dusk’ feature to honour the American event’s remarkable pedigree, three evocative showdowns featuring cars from Daytona will be staged together at sundown on Saturday evening.

What’s more, adding further to the sense of occasion, one of the key automotive milestones being celebrated at this summer’s Silverstone Classic is the 50th anniversary of the Ferrari 365 GTB/4 ‘Daytona’. Maranello’s seminal front-engined V12 grand tourer that is said to have been given its illustrious moniker in recognition of the Prancing Horse’s stunning clean-sweep 1-2-3 podium finish in the 1967 edition of the Floridian 24-hour showdown.

“Ever since the days of Segrave and Campbell, Daytona has been deified by motor sport followers here in Britain – that’s why we are so delighted to be celebrating its incredible heritage at this summer’s Silverstone Classic,” said Nick Wigley, CEO of Goose Live Events, organiser of the Silverstone Classic. “To hail Daytona’s amazing history, Saturday evening’s three races will all feature cars that have competed in the 24 Hours of Daytona – an epic challenge which is now firmly revered alongside Le Mans as one of the greatest endurance tests in global sports car racing.”

“This is a great honour for Daytona and our widely-admired 24-hour race, which has always had huge appeal to British drivers and teams,” said Chip Wile, President of Daytona International Speedway. “The Silverstone Classic is one of the world’s greatest events celebrating so much of motor sport’s history and we are really proud that it will be saluting Daytona come July.”