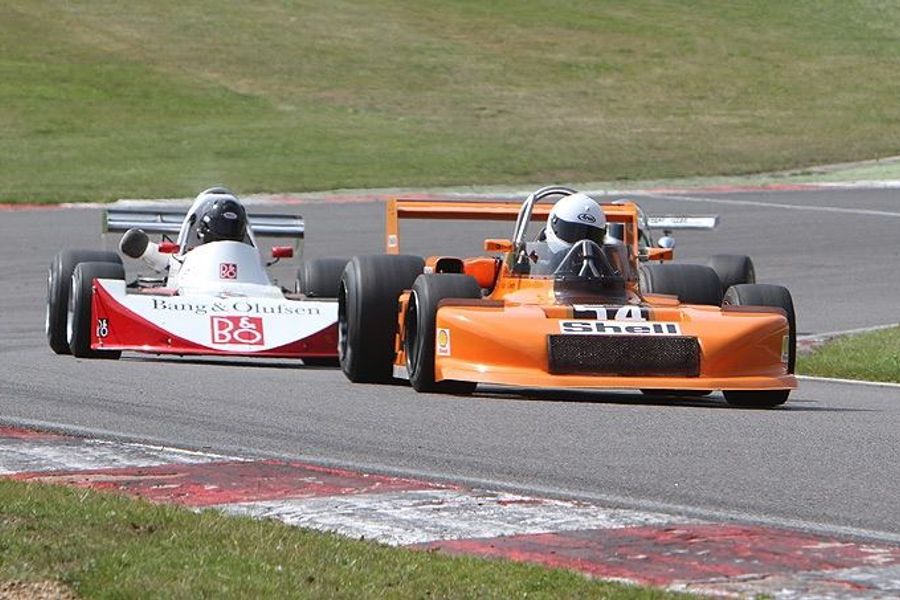 One of the major historic racing weekends of the season is the Historic Sports Car Club’s annual Historic Super Prix on the Brands Hatch Grand Prix circuit this coming weekend, (Saturday and Sunday 11th and 12th of July). A fabulous entry of over 370 classic and historic cars will take to the wonderful Grand Prix circuit at the Kent venue for a 17-race weekend where every race has both quality and quantity. Headlining races include rounds of the HSCC Historic Formula 2 FIA International Series, HSCC Jaguar Heritage Challenge, Pre ’80 Endurance Series and two races for the wonderful cars from the Historic Grand Prix Cars Association. A full range of HSCC championships packs out a top quality weekend. The 26th annual Super Prix marks the second of only two UK dates in 2015 for the Historic F2 cars. To date, double wins have gone to Darwin Smith (March 722) at Donington and Matthew Watts (March 772) at Monza. Coming to Brands for round five and six, it is all to play for in championship terms although double reigning champion Robert Simac (March 712) is already building a useful tally in the class for the 1600cc cars. Brand new for 2015 is the HSCC Jaguar Heritage Challenge for pre-1966 cars and this weekend the new series has round three of five. Star drivers in E-types are Martin Stretton, Graeme Dodd, Chris Ward and Bobby Verdon-Roe. A very welcome guest grid is a capacity line-up of cars from the HGPCA. The later cars will set the absolute pace, particularly the rapid Lotus 18/21 of Peter Horsman and the ex-Jim Clark Lotus 25 of Andy Middlehurst. Taking the fight to the quickest Lotuses will be the rapid Brabham BT11 of John Fairley and the Coopers of Rainer Ott (T53), Barry Cannell (T51) and Rod Jolley (T45/51). New for 2015 is the Pre ’80 Endurance Series for sports-racing, GT and Touring Cars of a type that competed in international races up to the end of 1979. Italian racer Michele Liguori won the inaugural race ran at Silverstone in his Lola T292 as Leo Voyazides and Simon Hadfield led the chase in their Lola T282. Both cars use Cosworth DFV engines and are lining up to continue setting the pace this weekend. From the ranks of 2-litre sports-racing cars, quick cars include Jonathan Loader’s Chevron B19, seasoned veterans John Burton and Andrew Schryver in B26s, Bob Brooks in his Lola T212 and Daryl Taylor in the rare Lola T390.  An amazing 42-car entry brings together the ONI PLC HSCC Historic Road Sports Championship and the FISCAR movement for 1950s sports cars. For the HRS contenders this will be round seven of 12 and it is shaping up to be a battle between the rumbling Morgan Plus 8s of Richard Plant and Kevin Kivlochan and the nimble Lotus Elan of Roger Waite.  Another excellent field of 1970s Road Sports will bring the curtain down On Sunday afternoon. TVR Tuscan racer Peter Shaw will be eager to make it five wins on the bounce, but a year ago James Dean won here in the nimble Lotus Europa. One of the weekend’s most impressive grids will be around 25 powerful single-seaters in two races for the Derek Bell Trophy. An occasional visit from a Formula 1 car adds to the spectacle and this weekend the rare Theodore TR1 of Philip Hall is a very welcome addition to the series. At least eight Formula 5000s will add drama and spectacle to the field, with period category star Ian Ashley (Lola T300) going up against Greg Thornton (Surtees TS11), Frank Lyons (Gurney Eagle), Paul Campfield (Chevron B24) and Daryl Taylor (Chevron B28) as well as Italian visitor Stefano Rosina (Leda LT25). Top of the HSCC’s Classic Racing Car Championship pack is ex-pat Kiwi Ian Jones in his gorgeous Lotus 59. However, Jones will not be expecting to have it all his own way and suffered a rare defeat recently at Cadwell Park when Benn Simms battled ahead in his rare Elfin 600.  Rising young star Richard Mitchell is the man to beat in the HSCC Historic Formula Ford 1600 Championship, while the HSCC Historic FF2000 Championship and URS Classic FF2000 Series come together to deliver a fabulous 30-car field. A fabulous field of Formula 3 cars from the 1970s and early 1980s will contest a double-header as the regular contenders in the HSCC’s Classic Formula 3 Championship are joined by a strong contingent of cars from France. A typically strong grid will contest round nine of the Silverline Historic Formula Junior Championship, with title leader Andrew Tart aiming for more front-engined success in his rare Bond. In the ByBox Historic Touring Car Championship, Lotus Cortinas take on Ford Mustangs, Mini Coopers and Hillman Imps in a series that never fails to deliver exciting racing. Defending champion Tim Davies has plenty of rivals, notably Leo Voyazides in his ultra-successful Ford Falcon, fellow Lotus Cortina pilots Mike Gardiner and Mark Jones as well as Ford Mustang racer Greg Thornton. On Saturday the first of seven races is at 13.30 after qualifying from 09.00.On Sunday the first of 10 races is at 11.45 after qualifying from 10.00