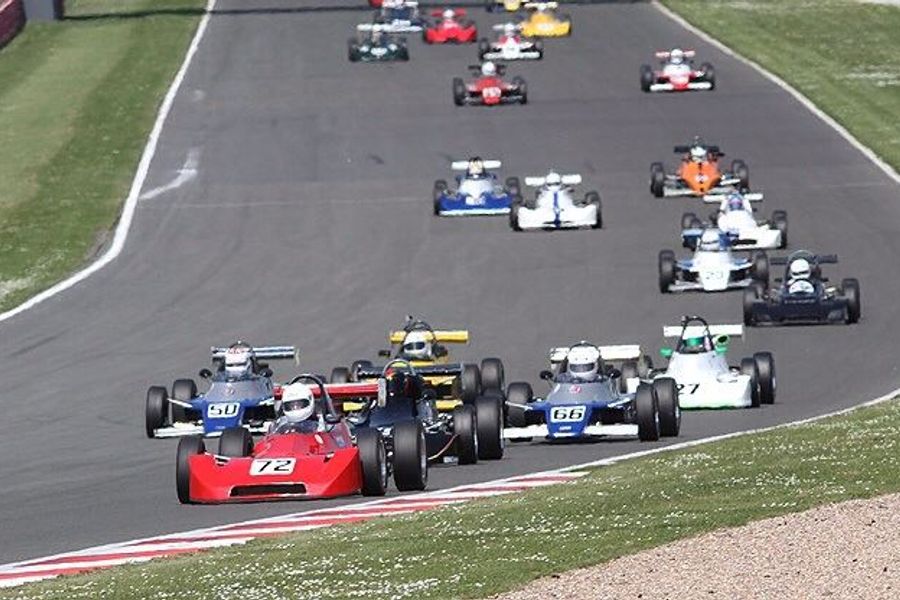 An impressive entry of over 450 cars will race on the Silverstone Grand Prix circuit next weekend (16th and 17th of May) during the Historic Sports Car Club's annual International Trophy meeting. A fantastic 14-race line-up includes the second round of the new HSCC Jaguar Heritage Challenge, the inaugural race for the Pre '80 Endurance Series, a round of the GT and Sports Car Cup and a full line-up of regular HSCC championships.

With a very impressive 25-car entry, the Pre '80 Endurance grid is the only entry of less than 30 cars and a mighty 51-car Guards Trophy entry marks the biggest grid of the weekend. Single-seater highlights include 30 Historic F3 cars for a double-header, 46 Formula Juniors, a 38-strong Historic FF1600 entry and 36 cars for the Derek Bell Trophy/Classic Formula 3 double-header.

The Pre '80 Endurance Series will get off to a fine start in a field packed with quality and topped by a pair of Porsche 935s for Jon Minshaw and Manfredo Rossi and including 2-litre sports cars from the former Martini Trophy including the Chevron B26 of John Burton and the B19 of John Sheldon. Leo Voyazides and Simon Hadfield will be major contenders in the 50-minute race in their DFV-powered Lola T282 while cars as diverse as the Ford GT40 of Tony Wood and the Chevrolet Corvette of Peter Hallford and Nigel Garrett grace the entry.

The second round of the Jaguar Heritage Challenge has another superb grid, including the Donington-winning E-type of Sandy Watson, which won the opening race in the hands of Martin O'Connell and Andrew Kirkaldy. A gaggle E-types pack out the grid along with XK120s and 150s and Mk1 and Mk2 saloons. More quality drivers on the grid include Le Mans winner Andy Wallace, Sam Hancock, Nigel Greensall and Calum Lockie.

Some of the leading E-types will also contest the hour-long GT and Sports Car Cup on Sunday morning. However a pair of Cobras could set the outright pace as Donington winners Voyazides and Hadfield top the entry in their Daytona Coupe. Father and son Grahame and Oliver Bryant will be very strong in their Cobra, while another father and son pairing of Barry and Tony Wood tops the sports-racing cars in the Lister Jaguar.

The 40-minute Guards Trophy race will be a highlight of Saturday's programme with the GT entry headed by the TVR Griffith of Mike Gardiner/Dan Cox and the AC Cobra of Robert Bremner. They finished less than half a second apart when the season opened at Thruxton, with the TVR just ahead. In the sports-racing division, leading runners include the Lenham of Stuart Tizzard and the Chevrons of Watson/O'Connell and Michael and Will Schryver.

Another fantastic grid of Formula Juniors will contest the fourth round of the Silverline Formula Junior Championship with nearly 50 cars in action. Heading the field will be the rear-engined cars of Sam Wilson Lotus 20/22), Andrew Hibberd (Lotus 22), James Claridge (Lola Mk5A) and Michael Hibberd (Lotus 27). The front-engined pace should be set by Stuart Roach (Condor S3).

Powerful single-seaters will line-up for the joint Derek Bell Trophy and Classic F3 races. At least half a dozen thundering Formula 5000s top the entry with the big contenders being Neil Glover (Chevron B37), Ian Ashley (Lola T300) and Frank Lyons (Gurney Eagle FA74), while Jeremy Smith runs the amazing six-wheeled March 2-4-0. However, the best of the 1600cc and 2-litre cars will be close, notably Steve Allen (March 782) and Richard Evans (March 79B). F3 front-runners are David Shaw (March 803B) and Gaius Ghinn (Ralt RT3)

A 30-car field will deliver a great start to the Historic Formula 3 Championship, with a race each day. Recent Goodwood winner James King is back from his US base to race his Chevron B17, while the progress of Benn Simms in the rare Elfin 600 will be watched with great interest. Meanwhile, a fantastic Historic Formula Ford 1600 entry includes a clutch of potential winners like racing newcomer Richard Mitchell.

Wrapping up the weekend will be two excellent races at the end of Sunday afternoon. Tim Davies (Lotus Cortina) and Neil Brown (Ford Mustang) will renew their friendly rivalry in the ByBox Historic Touring Car Championship round, while a tremendous 36-car field will contest a round of the Historic Formula Ford 2000 Championship and URS Classic FF2000 Series.