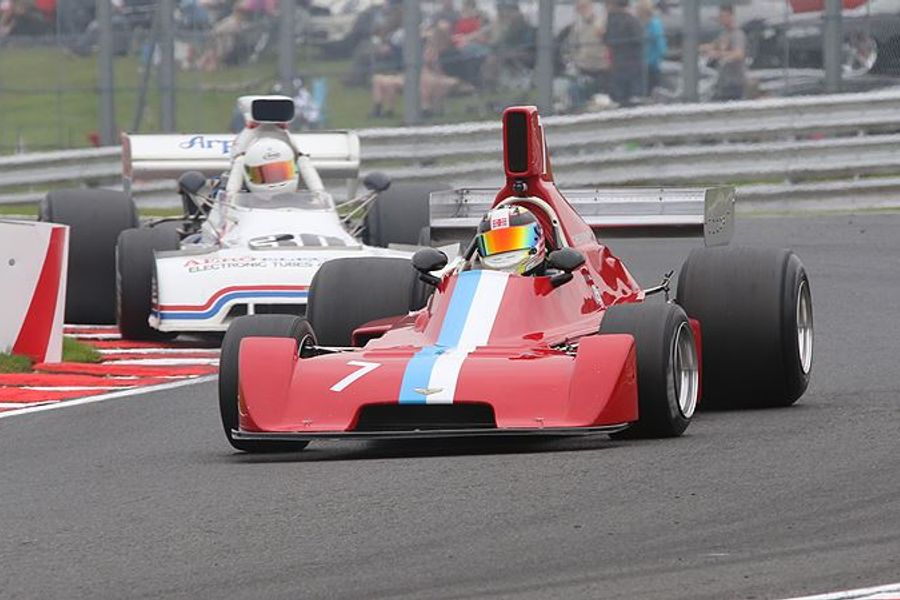 The Historic Sports Car Club’s 50th anniversary season continues with this weekend’s Oulton Park Gold Cup meeting at the fabulous Cheshire track (27th tot he 29th of August). The meeting is dedicated to the memory of the two people who were central to the creation of the HSCC, which dates back to 1966. Guy Griffiths and Betty Haig were the founders of the movement that started the club half a century ago, and they will be remembered during the weekend.
In honour of Oulton Park’s racing heritage, the famous Gold Cup title is being revived and a suitable trophy will be presented to the aggregate winner from the two races for pre ’66 Grand Prix Cars from the Historic Grand Prix Cars Association. A tremendous 24-car field will bring these stunning cars back to Oulton Park and recreate an era when the non-championship Gold Cup was contested by many of the leading Grand Prix drivers of the era.
Cooper and Lotus pioneered the move to rear-engined Grand Prix cars and these are the marques that dominate the entry, with likely pacesetters including Barry Cannell, Sid Hoole and Rudi Friedrichs for Cooper and Sam Wilson, Peter Horsman and Dan Collins for Lotus. However, category newcomer Richard Tarling could upset the formbook with the unique Assegai, South Africa’s only Formula 1 car.
Sharing star-billing with the Grand Prix cars will be a pair of races for the HSCC Super Touring Trophy, which brings the fantastic 1990s touring cars back to the track. Period racers John Cleland and Patrick Watts top the field along with defending champion Stewart Whyte (Honda Accord), local ace Jason Minshaw (Volvo V40) and his brother Guy (Audi A4).
Reaching the conclusion of its 2016 schedule will be the Jaguar Classic Challenge and a strong entry is topped by the E-type of Julian Thomas and Calum Lockie for the 40-minute race on Sunday afternoon. Two more 40-minute races run on Sunday as the Guards Trophy is split into two races; one for the GT cars and one for the sports-racers. The TVRs of Mike Whitaker and Mike Gardiner/Dan Cox top the GT pack, while more than half a dozen potential winners are in the sports-racing car field.
The mighty Formula 5000s, once part of the Gold Cup grid alongside contemporary F1 cars, will race twice in the Derek Bell Trophy double-header as Neil Glover (Chevron B37), Greg Thornton (Surtees TS11) and category newcomer Jamie Brashaw (March 73A) head the thundering pack.
Two tremendous fields of Road Sports feature in Sunday’s programme with excellent grids for both the Historic and 70s Championship rounds. Among the earlier cars it is Morgan versus Lotus, while a quartet of Lotus Europas will be to the fore in the 70s race as reigning champion Jim Dean again installs Julian Barter in his second car. More sports cars, this time the amazingly fast Classic Clubmans, wrap up Monday’s programme with a strong field headed by Mark Charteris and local ace Mike Evans.
Four races will start the third sector of the Formula Junior Diamond Jubilee World Tour, which will culminate in 2018 for the category’s Diamond Jubilee season. There will be double-headers for both front and rear-engined Formula Juniors and in the front-engined races it is Mark Woodhouse (Elva 100) against the Bonds of Mike Walker and Andrew Tart. In the rear-engined races Benn Simms will race the ex-Denis Welch Merlyn Mk5/7 for the first time and will go up against John Fyda (Brabham BT6), Andrew Hibberd (Lotus 22) and Nick Fennell (Lotus 27).
Another superb entry will contest the Historic Formula Ford 1600 Championship double-header on Monday with all the usual front-runners in a grid that has quality to match quantity. Former champions Benn Simms, Sam Mitchell and Callum Grant will face a gaggle of challengers.
The ByBox Historic Touring Car Championship also has a fine entry for two races on Monday. The Ford Mustang of Warren Briggs is the car to beat, but will be harried by a horde of Lotus Cortinas, Mini Coopers and Hillman Imps including rising teenage star James Clarke in a Cortina.
Wrapping up the superb programme is a double-header for the Historic Formula Ford 2000 Championship and a single race for the combined URS Classic FF2000 and Classic Racing Car categories.
On Saturday, a full day of practice and qualifying starts at 9am.
On Sunday, the first of 10 races starts at 12.05pm.
On Monday, qualifying starts at 08.30am with the first of 13 races at 10.40am.
Historic Sports Car Club’s 50th anniversary season Oulton Park Gold Cup