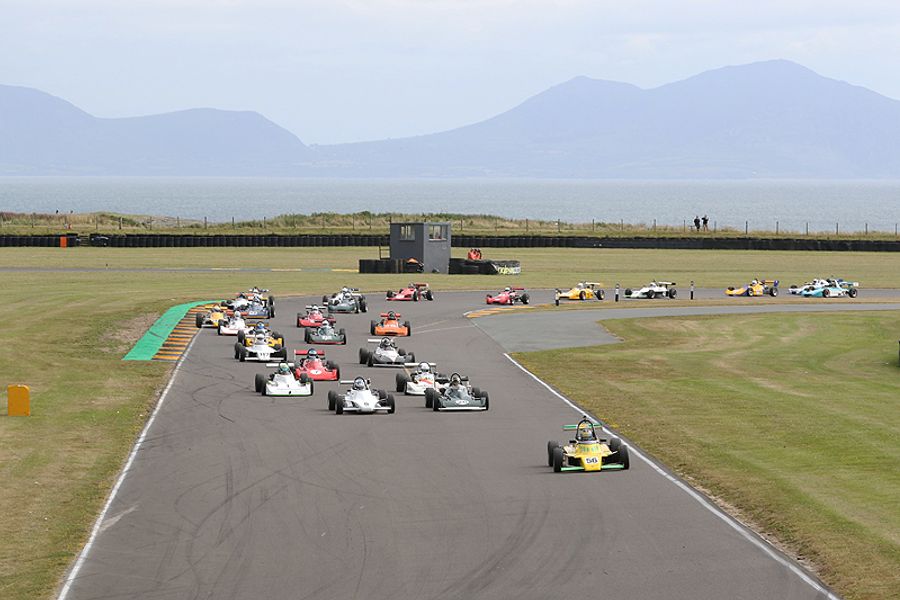 The Historic Sports Car Club’s inaugural race meeting at the spectacular Anglesey track in North Wales (July 13th/14th) delivered a fabulous weekend of racing as drivers loved the track and its coastal setting.

The first Tom Pryce Memorial Meeting featured 20-races, a total entry of more than 170 cars and a very special tribute to the life of Welsh racing driver Tom Pryce. The weekend also included the first stand-alone races for Formula Atlantic since the 1980s and the whole event was run in warm and sunny conditions.

As well as racing, many competitors took time out to enjoy the beaches of Anglesey and the whole weekend ran in a wonderful holiday atmosphere. Such was the overwhelmingly positive response from competitors that the Club is already planning to return.

Running his Van Diemen RF82 with his dad, and seasoned Formula Ford racer, Trevor on second-hand tyres, young Ben Stiles was mighty in the Classic and Historic FF2000 races to take a double win as Ian Pearson headed the Historics in his Royale RP30. On Saturday, Stiles had to withstand constant pressure from Pearson before taking his first overall FF2000 win.

On Sunday, Pearson grabbed the lead as Stiles struggled to get third gear and lost momentum. However, up to Rocket for the first time Pearson suffered brake pad knock-off and ran wide onto the grass. Stiles dived ahead to make certain of a weekend double at the head of a 30-car grid. Andrew Park ran third on Saturday but missed Sunday’s race due to a family commitment and so Paul Allen rounded out Sunday’s podium.

Switching to his Morgan Plus 8, Kivlochan won the opening 70s Road Sports race despite a spirited challenge from Jeremy Clark (Lotus Elan) after poleman Charles Barter (Datsun 240Z) was sidelined in qualifying with a suspected blown head gasket. The Morgan was on target to complete Kivlochan’s quartet on Sunday when it lost a wheel after a wheel nut failure. Clark, who had led the opening lap until running wide onto the grass, re-took control to win instead. 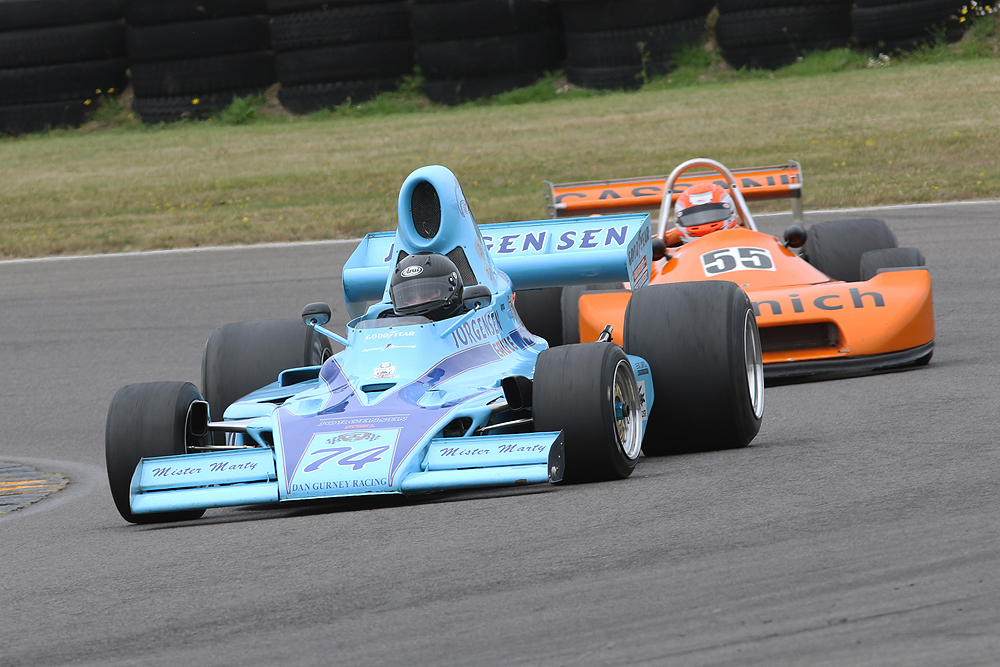 Matt Wrigley was also a three-time winner in his March 79B, having twice headed the mighty Formula 5000s to win both XL Aurora races. On Saturday, Frank Lyons moved up to second in his Gurney Eagle while on Sunday Gislain Genecand (Surtees TS5A) charged from the back of the grid to take second place. Wrigley’s double win earned him the Tom Pryce Memorial Trophy and a stunning Andrew Kitson original artwork of Pryce racing a Shadow Formula 1 car.

Wrigley then added another win in the inaugural Formula Atlantic race but elected to miss the second Atlantic race when damaged gearbox bolts gave cause for concern. Richard Ellingworth (ex-Alan Jones March 74B) took second after Iain Rowley (March 79B) retired with a loose wheel.

Later, an enthralling second Atlantic race had three leaders in the first two laps. Eventually, from the tail of the pack came Bob Juggins (March 722) to win in style from a hard-charging Rowley. Keith Norris (Chevron B49) and John Hayes-Harlow (Ehrlich RP3/4) both took podium places while a popular aggregate winner was Robin Lackford (GRD 272) who received the Karl Jones Trophy from the Welsh former touring car racer.

Richard Wilson (Brabham BT6) and Chris Drake (Terrier Mk4) both won twice in Formula Junior. Drake, who went to school at Llanfair PG on Anglesey, was able to out-pace Peter de la Roche (Lola Mk2) while Australian visitor Marty Bullock in his drum-braked Wren challenged Wilson until his brakes faded. Bullock held on for second on Saturday but was edged back to third on Sunday by John Fyda’s Brabham. 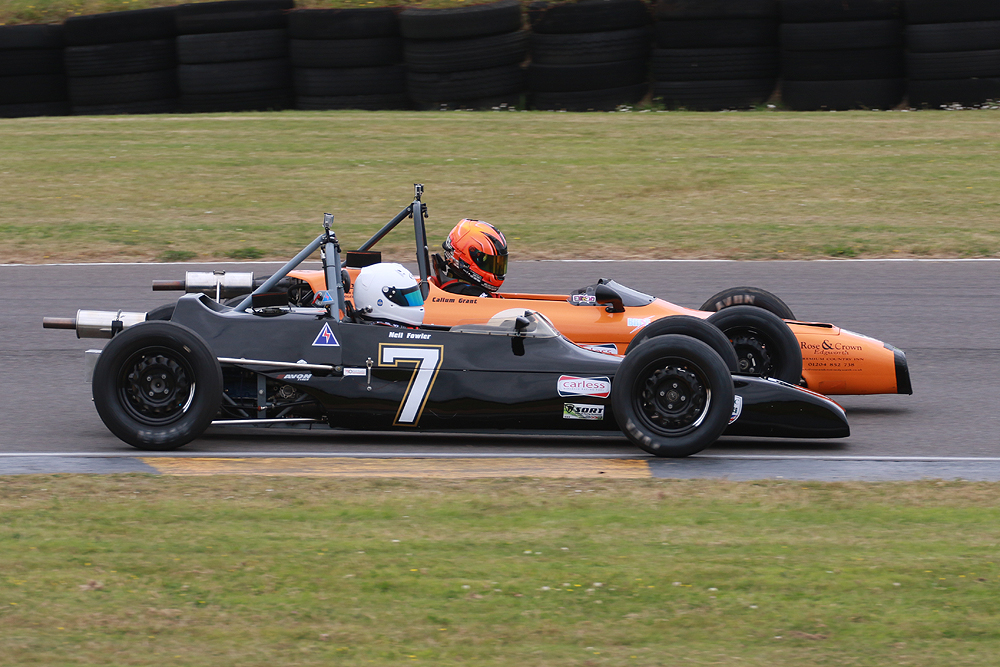 Callum Grant and Neil Fowler played out two tremendous sporting battles in Historic FF1600 as Fowler returned to the championship in the Winkelmann normally handled by Cameron Jackson. Swiss racer Gislain Genecand went with them and they traded the lead in Saturday’s race and Grant led before a quick spin after pushing just too hard into the hairpin. Grant after recovering for third behind Genecand, while on Sunday, there was little it, but Grant worked hard to just ease clear as Fowler fended off Genecand. As aggregate winner across the two races, Fowler was the winner of the Alan Cornock Award, which was presented by Richard Peacock, the man behind the creation of the Anglesey track.

Simon Armer (March 703) took two fine wins in Historic Formula 3 as Mike Scott (Brabham BT28) led the chase. In the opening race, Armer was chasing Jon Milicevic when the leader’s Brabham BT21B suffered a wishbone failure that ended his weekend. Leif Bosson just beat Barry Sewell after a wonderful battle to take third in the opening race, but it was Steve Seaman who came through to third in the later race after starting at the back of the grid.

Richard Belcher claimed a straightforward Historic Touring Cars double win once his early sparring partner Mark Jones was sidelined in the first race by electrical problem that developed into a small fire in his Lotus Cortina. Peter Smith, father of Le Mans winner Guy, was on only his second weekend of racing but bagged an impressive pair of second places in his Lotus Cortina as Joe Gomm (Ford Anglia) and Roger Godfrey (Mini Cooper) each earned a podium visit. 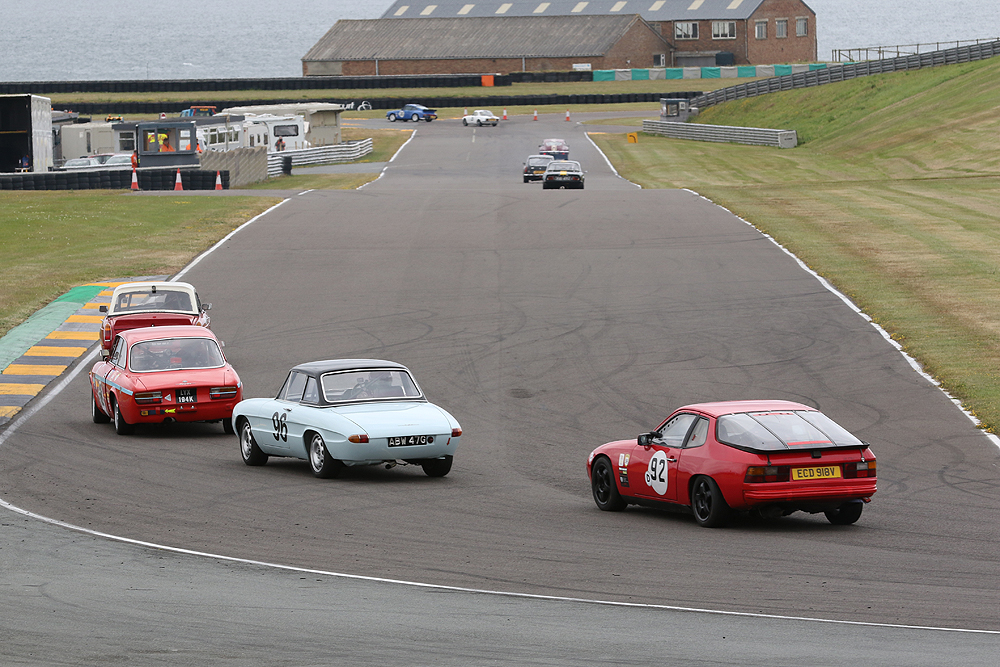